On entering, the white dome attracts your attention. It’s not the architecture or the gold centrepiece at its top. Nor the birds circling it. This dome seems to shape and consecrate every moment of this place. The fakirs (ascetics) near the ablution pool face it. So do the pilgrims in the marble courtyards. The Khwaja’s tomb is directly below. The heart of Sufism: Pilgrims carrying flowers for Moinuddin Chishti.

As the cliché about the intolerant Muslim refuses to go away, as Sufism remains anathema to a section of Muslims, what is the significance of South Asia’s most important Sufi shrine?

“The 800th urs is taking place in a troubled world where the religious discourse has been hijacked by the rhetoric of rage," says Syed Salman Chishti, a khadim (caretaker) whose family has served at the 13th century shrine for generations. “The world must turn its attention to Ajmer, where people from different faiths gather in one assembly to share and not to impose their beliefs."

The world instead turned its attention to a city 120km from Ajmer, where a protest by a handful of Muslims compelled the organizers of the Jaipur Literature Festival to cancel novelist Salman Rushdie’s video appearance last month. While all practising Muslims this reporter talked to expressed discomfort with Rushdie’s references to Islam in his banned novel The Satanic Verses, many pointed out that his case must not be used to judge the Muslim character and that the essence of India’s Islam lies in Ajmer. 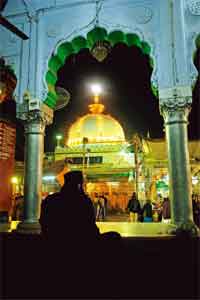 The gold crown at the dome was offered by a brother of the nawab of Rampur in 1896.

He died in 1236. The death anniversary of a Sufi saint’s death is not mourned, it is celebrated. Urs means “wedding" in Arabic and it symbolizes the union of the lover with the beloved, who is God.

“The 800th milestone doesn’t signify much in our religion but it lets us pause to commemorate the central place of Gharib Nawaz in the idea of India," says film-maker Muzaffar Ali, who will present the 10th edition of his annual Jahan-e-Khusrau Sufi music concert in Delhi in March. “In a multi-ethnic, multicultural, multi-religious country, nothing could be more relevant than Gharib Nawaz’s message of love."

“Ajmer is the little Medina," says Sadia Dehlvi, author of Sufism: The Heart of Islam. “Sufism is about making linkages to God through his friends. In Medina, there is the spiritual presence of Prophet Muhammad. In Ajmer, one experiences the same closeness to God, for Khwaja sahib is a direct descendant and lover of the Prophet," says Dehlvi.

Outside Ajmer, the news from the world of Sufis is not only about sama,fanaa (dissolution) or the chartbuster film song Kun Fayakun. “We can no longer keep ourselves inside our dargahs," says Maulana Syed Mohammad Ashraf Kachochavi, the general secretary of the All India Ulama and Mashaikh Board (AIUMB), which was formed in 2005 and claims to represent the majority of Muslims in India. Last year, it held four Sufi Maha Panchayats in Uttar Pradesh and Bihar that were attended by hundreds of thousands of people, according to news reports. “We are telling India’s non-Muslims that the people the media and the government treat as spokespersons of our community, are not our leaders. Those who issue fatwas from seminaries like Deoband are inspired by extremists."

South Asia’s Islamic community is largely composed of the Barelvis and Deobandis, both named after towns in Uttar Pradesh. The former, who have their theological school in Bareilly, are followers of Sufism, while the orthodox jurists in Deoband are against the concept of intercession to God through saints. In November, Deoband passed a fatwa against celebrating the Prophet’s birthday, calling it un-Islamic, an occasion traditionally held with great fanfare in Ajmer and other dargahs. 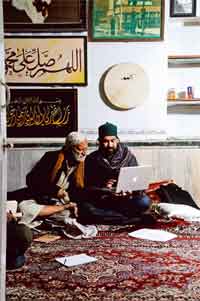 “While it’s incorrect to say that our fatwas have no influence you should note that we don’t issue them on our own," says Maulana Qari Syed Mohammad Usman, the hadith (the sayings of the Prophet) teacher at Deoband and president of the political party Jamiat-Ulama-i-Hind. “We only give one if somebody asks for clarification on a certain matter. We don’t take any action if the fatwa is ignored."

Explaining Deoband’s stand on Sufism, Usman says: “In Islam, there is only Islam, no Sufism. We don’t mind if people go to tombs to recite fatiha (prayer for the departed souls) but we are against the dargah traditions, especially on attending urs festivals. Spend your time thinking of Allah, not listening to qawwalis."

“The Deobandis subscribe to a more textual analysis of the Quran," says historian Mushirul Hasan, the author of Islam in the Subcontinent: Muslims in a Plural Society. “Barelvis take a more eclectic view and have practices that can be described as composite. Their daily life is closer to the customs of other Indian communities. If you go by the population, Barelvis both in India and Pakistan are greater in numbers. But Deobandis are politically better organized and so are more visible in the public space."

“Sometimes even Deobandis come here to seek the Khwaja’s blessing," says Syed Anwar-ul-Haq Chishti, an elderly khadim sitting cross-legged in the Ajmer dargah. A long queue is forming for the sunset ceremony of Dua-e-Roshni (prayer of lights). Each evening as khadims carry large yellow candles to the durbar, the tomb-chamber, hundreds of birds suddenly land on the branches of the mursali tree. Little else is heard in the courtyard except for their chirping. As the drummer strikes, the candles are lit amid the chanting of a Persian invocation to Gharib Nawaz, acknowledging him as the foremost friend of God on the face of the earth.

“Ajmer Sharif is the extension of what I am," says film-maker Mahesh Bhatt. “Being the son of a Shiite mother and a Brahmin father, my biological construct is a union of Muslim and Hindu cultures. There are more Hindus visiting the dargah than Muslims. It is the Khwaja’s wide appeal that has kept his cult going." 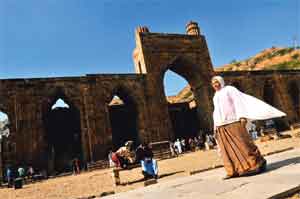 In 1911, when Delhi was established as British India’s new capital, Queen Mary passed through the pilgrim town, paying for the restoration of the ablution pool.

On 11 October 2007, during Ramzan, a bomb exploded below the same mursali tree. Three people died. The alleged suspects were first thought to be Islamic extremists and later, Hindu.

“The aim was to oppose the stream of thought on which Ajmer is built," says Bhatt. “The idea of the Other is not a threat in the Khwaja’s dargah, which is like a garden where the rose is not frightened of the mogra. Both have a distinct fragrance and together they make the scent."

As the winter sun sets behind the barren Aravalli hills, the marble floor gets cold. Qawwals sit facing the durbar; some listeners look lost, others gaze at the dome. Among the devotees, the Kashmiris stand out in their loosely hanging pherans. A woman in a red sari has her hands folded in prayer. She is sobbing.

Although people of all religions visit Ajmer Sharif, its daily rituals revolve around the five mandatory prayers of Muslims. This is not surprising since Moinuddin Chishti was one of the pioneers of Islamic mysticism in the subcontinent. His arrival from central Asia in 1192 coincided with the conquest of India by Muhammed of Ghor, who defeated Prithviraj Chauhan, one of the last Hindu kings to rule Delhi. After settling in Ajmer, a Hindu pilgrimage town close to the holy lake of Pushkar, Moinuddin Chishti won the respect of both believers and non-believers. He lived in the cell in which he lies buried. The tomb is built over a series of cellars which, according to The Shrine and Cult of Mu’in al-din Chishti of Ajmer by P.M. Currie, might have formed part of an earlier temple.

“Before reaching Ajmer", says Raza Rumi, a writer and political analyst from Pakistan, “Moinuddin meditated in Lahore for 40 days at Data Darbar, the shrine of Usman Hajvery. Gharib Nawaz consequently is cherished in Pakistan and hundreds of Pakistanis visit his dargah." India issues special visas to Pakistanis for the urs. The bazaar outside the dargah.

“The majority of Indian Muslims were Hindus," says Dehlvi, “and accepted Islam because of Gharib Nawaz and the Sufis who spread his message. The Khwaja allowed his followers to express the love of God through inclusive traditions such as music. This sanction gave birth to diverse devotional expressions that thrive to this day." The food cooked in the dargah’s giant copper cauldrons, distributed after the morning and evening prayers, is always vegetarian.

Rumi says, “The Chishti school of Sufism did not exclude any religion and gave way to a plural Indian identity. This is why the extremists in Pakistan, especially the Taliban, are against such devotional practices." In 2010, the dargah of Baba Farid in Pakistan, another saint of this Sufi order, was bombed.

As with most places in India, the bazaar in front of the dargah is a world of contrasts. Immaculately dressed men in crisp white salwar-kurta walk beside open drains. Beggars line the road that leads to the shrine of the patron of the poor. The alm-seekers might not have money for clothes but their bowls are filled with chameli garlands. Plastic flowers decorate the tongas that go as far as the Khwaja’s chillah, the hilltop cave where he meditated. Overlooking the Ana Sagar lake, the chillah is deserted. Cats prowl beside tombs. A stall offers amulets and booklets on Ajmer Sharif.

After the night prayers, while the qawwals are rendering verses in the courtyard, the worshippers are asked to leave the durbar, which is then cleaned by three khadims with brooms made of peacock feathers. As the last functionary comes out of the chamber, everyone gets up and the qawwals recite Karka, a musical verse in Persian, Sanskrit and Brij. The Khwaja’s chamber is locked until the pre-dawn prayer. The nine-day urs begins after the sunset prayers, for the Islamic day changes at the twilight hour. Attending it is not easy. Ajmer is packed far beyond its capacity. The lanes overflow with a sea of humanity. People queue for hours to enter the durbar to touch the Khwaja’s tomb. From large hotels to roadside guesthouses, every place is occupied. Verandas too are taken over by beds.

For the Qul, the prayer on the final day of urs, every roof and window is taken over by crowds jostling to get a view of the crammed dargah. It is as if all of Ajmer is resounding with prayer.

Though the town gets back its breathing space a day later, the crowd at the dargah never dissipates. Divided by religions and countries, the devotees of the Khwaja, spread across South Asia and beyond, challenge these rifts each time they come to his durbar.

Muzaffar Ali designs and directs Jahan-e-Khusrau, the Sufi music festival whose 10th edition will be held in March

• A performance by dancer Zia on Amir Khusrau’s poetry; and singer Abida Parveen from Pakistan, on 4 March.