Fossils of our ancestors, a 95-year-old relative of Barack Obama, and weaver birds flitting between fig and mango trees

It’s a bucolic scene. Roadside stalls sell hunks of ugali, or cornmeal; battered matatu vans overloaded with people plod along dusty roads, faster only than the donkey carts that lumber on with their loads of bananas; schoolchildren walk barefoot; spiny acacia trees etch themselves on to bright blue skies. I am in Kogelo in western Kenya, close to the country’s third largest city, Kisumu. Nobody cared for it very much; it is just a sleepy village, not unlike many others near it. That started changing when a certain Barack Obama mentioned it in his autobiography as the place his father was born.

And so, like everyone who comes to Kogelo, I make my way to the homestead of local legend Mama Sarah Obama, the third wife of US President Barack Obama’s grandfather. Mama Sarah lives in a concrete home built recently, set back a few hundred yards from the road and surrounded by huts and cattle. Close by is the local primary school and the secondary school named after Obama in 2006. The wall at the front of the house has a recently painted family portrait of the Obamas.

I see Mama Sarah waiting for us, sitting on the porch of the house in a brilliantly patterned red traditional dress with headgear, metres from the newly refurbished graves of her husband and son in the family compound. Small vegetable plots line the garden, chickens and ducks waddle around the small huts in the compound, and curious children look at us from behind bushes. One shy girl, carrying a hen in a basket, giggles as I try to photograph her and runs away to a small tin shed. “Mama Sarah has lived here since 1942, when she came here as a bride," says her daughter, Marsat.

The feisty 95-year-old is still sharp and active, taking care of children orphaned by AIDS and widows in the village. She has an early learning centre just behind her home and cares for a few orphaned children in her own home. She proudly tells me about Obama’s visit a few years ago, when he had lunch with her along with his family. When I ask her how she looks so strong and vibrant at 95, she replies, “It’s just my faith in God and the joy I derive from supporting the less fortunate." 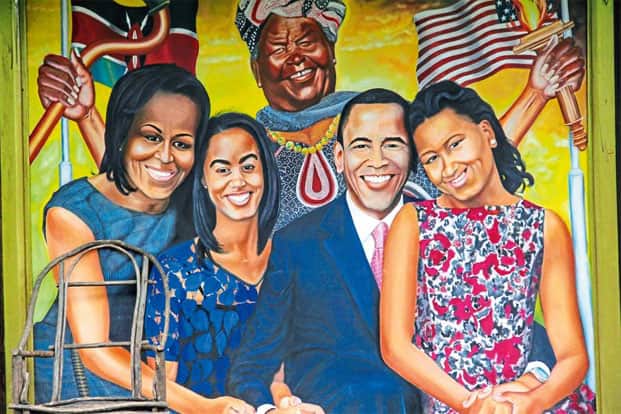 The “star attraction" notwithstanding, Kogelo and the surrounding region have much more to offer. “This part of western Kenya is still little visited, and most tourists head to the Maasai Mara National Reserve on the well-beaten tourist track and miss this remote but highly fertile land, with beautiful mountains, the city of Kisumu bordering Lake Victoria, fishing villages, wildlife sanctuaries like the Ruma National Park and archaeological sites," says Suzanne Mtiley, of the Kenyan Tourism Board.

I drive back through the dusty town of Kisumu, which was founded in 1901 as the terminus for the Uganda Railway and became a significant trading hub with a large community of Indians, to reach Lake Victoria—a place of fantasy and wonder for me ever since the geography lessons of my childhood. The lake, which stretches out more like a vast ocean, touches the coasts of Uganda, Tanzania and Kenya, and is the source of the river Nile. It was British explorer John Hanning Speke who gave it its name in 1858, in honour of Queen Victoria, when he finally sighted it after months of braving dense forest and disease.

In our 45-minute ferry ride across Lake Victoria from the mainland, cows and donkeys on their way to the weekly cattle market intermingle with cars, vans, locals and hawkers selling trinkets and boiled eggs topped with raw onions.

We reach Mbita Point, near Rusinga Island, following a bone–rattling, bumpy dirt track to the Rusinga Island Lodge, once the residence of a British Kenyan family and now a luxury resort. It’s almost night by the time we reach the lodge, and we are so travel weary that we hardly notice its elegant, thatched-roof cottages, furnished with four-poster beds and mosquito nets, and decorated with vibrant African art. Come morning, I part my window drapes to savour a scene that unfolds with cinematic élan—bright yellow weaver birds flitting between fig and mango trees, manicured lawns with wooden benches that face a silvery Lake Victoria, dotted with painted fishermen’s dhows. We climb into a small boat with Suleiman, our guide, to explore the islands nearby.

We alight at Latari village, one of the largest fishing villages, where people from the Luo tribe (the third largest ethnic group in the country) have been fishing for generations. “They are nomadic people, moving where the shoals of fish are aplenty and renting accommodation there," says Suleiman. I wave to the smiling women washing clothes in buckets on the edge of the lake; their children are doing the dishes. Stray dogs sleep on the large billowing fishing nets that cover the rocks like lacy tablecloths. Huge mounds of tiny, sardine-like, silvery kapenta fish, the local source of protein, are being dried on plastic sheets as lines strung over them keep the aggressive egrets away.

I walk through the red earth streets of the tiny village with makeshift tin houses and market stalls, followed by children in ragged clothes, holding toys fashioned out of old cans and cartons. The small stalls sell a bewildering assortment of goods, from greens like spinach to utensils and clothes. Small eateries do brisk business selling hot chapatis and fried fish.

“The gender divide in jobs in the Luo tribe is very clear," says Suleiman. The Luo fishermen fish at nights using special wicker baskets and lanterns whose light attracts flies and shoals of kapenta to the surface, where they can be caught in fine mesh nets. The women wait for the fish on the beaches, collecting when the canoes land. They dry them and pack them in huge sacks.

We have to get back into the boat to reach the Ruma National Park, famous for the endangered roan antelope. We spot herds of zebras, impalas, brown antelopes called topi, with patches on their legs like socks, and packs of mischievous baboons— but the roan antelope proves elusive. Suddenly, the ranger cautions us to keep quiet as he brings our jeep to a halt and points to a tawny leopard draped on the branches of an acacia tree. It’s a safari “ahaa" moment, compensating for the earlier disappointments. 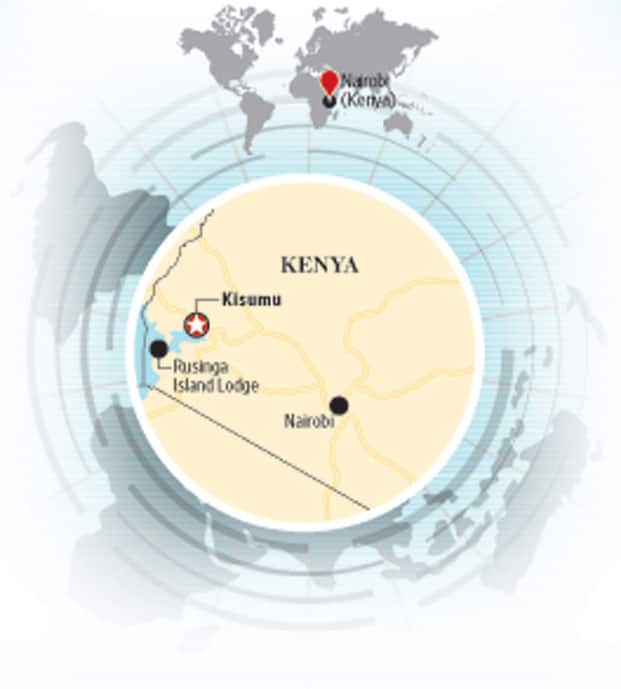 But the day is not over. The jeep gets mired in slushy mud on a narrow stretch inside the national park, and a busload of children on an excursion with Christian missionaries is stranded behind us. This area is known for its schools—there are as many as 35 of them.

That evening, under an old fig tree planted on a slope, Suleiman casually picks up a fragment of an ancient tooth. Strewn in the mud are the bone fragments and teeth of an extinct genus of crocodile, brought to the surface by the erosion of the top soil. Close by is the spot where fossils (carbon-dated to 18-20 million years ago) were found by palaeontologists Mary and Louis Leakey. A powerful volcanic explosion near Lake Victoria preserved these beneath a layer of ash.

When Mary was excavating a hillside in 1948, she found a fragmented skull, as well as two jaws with complete sets of teeth. This skull of an early ape called Proconsul is preserved today at the National Museum in Nairobi. “The ancient Proconsul is the last common ancestor to whom we—humans and apes alike—all trace our past. Dig anywhere on Rusinga Island and you will find a fossil," says Suleiman, pulling out a ceramic replica of the skull from his bag.

On the final day of the trip, I stand watching the lanterns of the Luo fishermen blinking over Lake Victoria, like a city afloat on dreams. From prehistoric fossils that point to the origins of man, to the roots of the man who made history by becoming the first black president of the US; from the traditional ways of the Luo to the vastness of a lake that is among the world’s greatest, there is much that those tiny flickering lights of the night hide.

Fly South African Airways from Mumbai to Nairobi. Fly to Kisumu from there.

The Rusinga Island Lodge on the shores of Lake Victoria is a great place to stay, with wooden huts decorated in an African theme (www.rusinga.com).

Local Kenyan food like ugali (cornmeal) with irio (mashed potatoes and peas), sukuma wiki (greens), nyama choma (roasted meat) and kachumbari salad with onions and tomatoes. You will be surprised to see that most menus feature chapatis too. Try the local Tusker beer and fine Kenyan coffee.