Just over a year ago, M.S. Raghunathan, Homi Bhabha chair professor at the Tata Institute of Fundamental Research (TIFR), was mulling over ideas on how to to break the monotony of a mathematics conference with a dash of culture, related to the theme of the conference. Indeed, the International Congress of Mathematicians (ICM), which is being held for the first time in India this August in Hyderabad, was not among the easiest of gatherings that could be enlivened with artistic distractions. But, as it were, the right equation was round the corner. 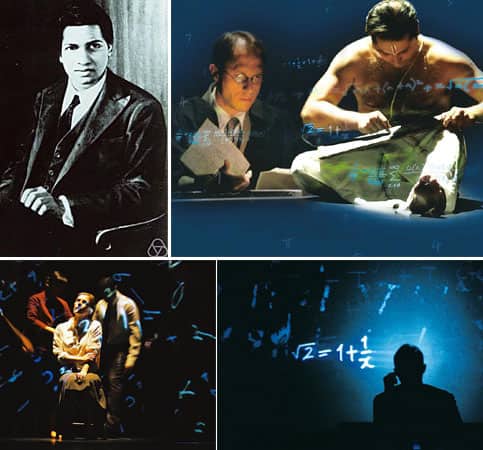 Wizard on stage: (clockwise from top left) Srinivasa Ramanujan. (Photograph: Konrad Jacobs/Mathematisches Forschungsinstitut Oberwolfach gGmbH; Complicite’s play A Disappearing Number uses a lot of technology and has a team of around 25, including a cast of eight performers, that makes it an expensive production. Phtographs: Robbie Jack and Joris Jan - Bos

Having heard of a play on mathematics, Raghunathan, also the chairman of ICM’s organization committee, made enquiries about bringing it to India, only to discover that not far from TIFR in Chembur, Mumbai, Sanjana Kapoor was trying to do the same.

Kapoor, director of the Prithvi Theatre in Juhu, had seen the UK production Complicite’s A Disappearing Number in 2007 and had tried twice, unsuccessfully, to get them to perform here. The production costs were huge, funds had collapsed in previous attempts, and ideas on how to stage it in India were drying up.

That’s when Raghunathan got in touch with Kapoor and told her of ICM’s intention; this led to a further collaboration with the British Council and principal sponsor Tata Photon.

The play relies on technology extensively, has a cast and crew of about 25 and, despite sponsors, its production will cost ICM a substantial portion of its total budget. So why were Kapoor and Raghunathan, from such diverse professions and interests, chasing the same expensive dream?

A Disappearing Number is based on the intriguing relationship between Srinivasa Ramanujan Iyengar and his English mentor G.H. Hardy, and takes its inspiration from the latter’s 1940 essay A Mathematician’s Apology—thereby presenting ICM with a unique combination of theatre and math that could only have been a coincidence.

Kapoor mentions that there is another play on Ramanujan in the US. At least two film-makers in India have announced plans to make movies on him. The reason behind this enduring fascination is the story of Ramanujan itself.

Murali K. Srinivasan, head of the mathematics department at the Indian Institute of Technology (IIT), Bombay, echoes the opinion of his colleagues on Ramanujan’s life, saying a “glance at the ingredients will convince one that: thirst for knowledge, height of creativity, mystery and mysticism, life set in very different cultures, tragedy, ill health and untimely death… there’s nothing which really isn’t there."

Robert Kanigel, in his 1991 biography Man who Knew Infinity: A Life of the Genius Ramanujan, quotes an Englishman in Trinity College, Cambridge, as saying that Ramanujan was a “mathematician so great that his name transcends jealousies, the one superlative great mathematician whom India has produced in the last thousand years". Kanigel himself calls it the story of an “inscrutable intellect and a simple heart".

Math and the man

Born in Erode in 1887, brought up in Kumbakonam in Tamil Nadu, Ramanujan was a mostly self-taught maverick who had mastered college-level mathematics by the time he was 13 years old and “could rattle off numerical values of pi to any number of decimal places". He would finish exams in half the time and solve problems of schoolmates two years ahead of him at a glance. His school headmaster would introduce him as a student who deserved higher than the maximum marks possible, according to Kanigel’s biography.

He reached the peak of his productivity when he worked with Hardy, who not only recognized the talent that shone through his rambling hand-written letters but also went to great lengths to bring Ramanujan to England. The boy who grew up in a conservative, Brahminical world reached glittering Cambridge, shocking the “pristine proofs of Western mathematical tradition with mysterious powers of intuition from the East," Kanigel adds.

Hardy, a cricket lover, prose stylist and distinguished mathematician, formed a mutually influential partnership with Ramanujan, which he called “the one romantic incident of my life".

The story is, therefore, of the two men, not just one.

A Disappearing Number faced the same quandary that Kanigel did when writing his book—to tell the story without getting mired in the complexities of formulae and symbols that are intrinsic to mathematics and intertwined with Ramanujan’s life.

“It’s a human story," says Kapoor, “but the base is actually the philosophical concepts of math the two men worked on."

According to Judith Dimant, the producer of A Disappearing Number, it took Simon McBurney, who conceived and directed the play, more than 10 years after he read the manuscript to figure out how to stage it. “We (Complicite) did Measure for Measure in India in 2005 and that visit inspired Simon. We made A Disappearing Number in 2007 but were committed to seeing it being performed in India," she says over the phone from UK. The play will be performed in Mumbai and in Hyderabad during the 10-day ICM in August.

Dimant adds that Complicite’s need to come to India was obvious—it expects a different reaction in the land of Ramanujan’s birth because people are familiar with the man, even if the reception and reviews have been fantastic in both the UK and the US.

A life cut short by illness—he died at 32—Ramanujan’s legacy is as complex as his work. Even in the late 1980s, around 60 years after his death, a rediscovered Ramanujan manuscript needed an expert in a narrow field of math to understand it, merely a PhD did not suffice, according to Kanigel, emphasizing that his significance has not diminished with time.

The pride of place he holds in India is evident—right from the posters that adorn the walls of Ramanujan Hall at IIT Bombay’s math department. Professors of the department, led by Srinivasan, give the example of the “mock theta functions", which first appeared in Ramanujan’s last letter to Hardy (January 1920). Quoting from the Annals of Mathematics, 2010, they say “Ramanujan’s mock theta functions indeed possess many striking properties and they have been the subject of an astonishing number of important works".

Gadadhar Misra, professor at the Indian Institute of Science, Bangalore, adds: “His math had mysticism. People are still researching the notes he left behind. His understanding is highly respected and unparalleled in 100 years."

Yet, his life and work present a paradox when compared with the idea behind ICM. While the Congress aims to bring over 3,000 of the best minds together to discuss research in mathematics, Ramanujan worked in isolation till he met Hardy, as IIT’s Jugal K. Verma points out. “Math is different from other experimental sciences, where large teams of people bring in different capabilities. Math solutions occur often in a single bid."

Misra, also in the ICM organization committee, adds that in the modern context, “no one person can actually carry the burden of this kind of excellence, because the nature of research is (such that) we need to learn from each other."

Mathematical research in India has not touched the highs in the modern era that it did historically. Verma reasons that the best results come out of developed countries, so a society has to be prosperous and at peace for the arts to develop. “When people were looking at fundamental things like ‘zero’, India was the richest country in the world," he says.

Misra adds: “Do we have three departments that compare with the world? I would say no. We have missed out in the modern era: Individual excellence has been of significance but (you) never hear of a team that has been successful."

Raghunathan’s assessment is kinder. “While the numbers in India are small, the peaks are world-class. ICM’s coming to India is indicative of that." To ensure quality and variety at the ICM, he adds, world champion Viswanathan Anand will be there too: He will play simultaneous chess against 40 delegates—not surprising since, in Hardy’s own words, “chess problems are hymn-tunes of mathematics".

What future mathematical research and excellence has in India is a matter of conjecture. The four professors concur on certain points: There are more institutions than before but the lack of human resource could be a deterrent. There is promise in numbers—IIT Bombay has over 50 PhD students in mathematics, more than ever before. Even if math is not as “glamorous" as some of the other sciences, increasing employment opportunities, besides academics, will generate interest. School education is such that Indian children do not “fear" math as they do in some other cultures, and is more advanced here than in several other countries.

By staging A Disappearing Number, ICM organizers hope to ensure Ramanujan remains in the social consciousness of his native country. As Hardy wrote in A Mathematician’s Apology: “Archimedes will be remembered when Aeschylus is forgotten, because languages die and mathematical ideas do not. Immortality may be a silly word, but probably a mathematician has the best chance of whatever it may mean."

He may well have been talking of the man from Kumbakonam.

A Disappearing Number will play at the Jamshed Bhabha Theatre in Mumbai on 9-11 August; and at the ICM conference in Hyderabad starting 19 August.