Sorry seems to be the hardest word...

Sorry seems to be the hardest word...

The other day, I ran into someone and we ended up discussing my last column on redeeming oneself after a mess-up—admit, apologize, amend. The person in question is a well-mannered professional who apologizes without hesitation when he bumps into someone on the street. But he admitted that when faced with a serious situation at work (or at home), he just didn’t know how to express remorse. He knows he has goofed, that the other party is understandably mad at him, sometimes he’s even genuinely sorry—but the words just stick in his throat. 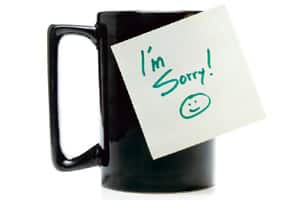 Make amends: An apology should be sincere and real; do not give excuses or justifications.

Yes, it’s hard to do. And thanks to anger, pride, shame, the need for control, the liability issues that could arise and just plain ego, it’s significantly underused, particularly in the business context.

What’s done is done, so why apologize? It may be the hardest part of mopping up a mess, but it’s often the most straightforward way of diffusing a situation. When people want to forgive—and they often do, after they have cooled down—they need to hear the three little words as part of the recovery process. It’s not about the fact that an apology can’t change things, it’s about taking responsibility for letting someone down. It’s about rebuilding a relationship; about beginning to reinstate trust and respect. The apology sets the stage for redemption; it is the line that is drawn between whatever happened, and its resolution.

To start with, be clear what the apology is for, and where culpability lies. How serious was the transgression, and what are the fallouts? Are there legal or employment implications? Reputation risks? Was it an inadvertent personal mistake (hand of god goal?), a premeditated act (insider trading), or a systemic issue which may well happen again (say, a bag lost by an airline)? A breach of faith? A bad business decision? Was it personal or public? The nature and tone of the apology will vary considerably.

Either way, a good apology has a structure. It may be written or spoken, public or personal, but usually involves taking a deep breath, summoning up grace and courage. It starts with a specific explanation of the events, without attempts to broaden the blame, followed by an acknowledgement of the damage caused, feelings hurt, losses incurred. Ownership of responsibility by the company or the individual are a must, as are appropriate expressions of remorse. Lastly, it must outline steps taken towards restitution or resolution.

Sometimes, as soon as possible. An off chance comment to a receptionist about a sleepless night on an uncomfortable bed at a reputed five-star hotel got an instant apology, a night taken off the room bill and an entry in the customer records about a hard bed. Am I going back? You bet. Don’t wait till the judge tells you off, or the customer fires you. Occasionally, it may make sense to wait for things to calm down a bit, but it’s always sooner rather than later.

If the transgression was broad-based or in the public domain, a public apology may be necessary. The media baron accused of phone hacking printed a full-page apology to the affected parties, readers and the public. Else, the apology may need to be one-on-one. If the apology is written, it could be better crafted and more comprehensive, more permanent—also, this gives the receiver time to compose a response. If the apology is in person, as it often needs to be, the apologizer needs to be prepared to deal with the reactions that may follow, on the spot.

On the spot, over a meeting, on the phone, on email, by tweet, on the radio. Make it real. Keep it sincere. Rehearse it if possible, or have it proofread by someone with a little perspective—and of course vetted by the company lawyer, if appropriate. Above all, even though things are probably still unsettled, maintain good grace.

The apology is about the screw-up and nothing else. The fact that he didn’t know, the email server was down, the assistant did it—is irrelevant. And it is less about the events that transpired, and more about the damage caused to the affected party. Stick to the script. Allow the recipient to vent. Listen. Bite back the excuses and the justifications. Think about—or ask —what can be done to make it better. Make amends. And a real apology comes with an assurance—It’s not I’m sorry I got caught. It’s I’m sorry, I won’t do this again.

And what of the other side, the recipient? Upsetting as the situation is, recognize that it will take time and some effort on both sides to reconcile. Respect and validate the attempt to resolve things. Be receptive, hear it out and don’t interrupt. Watch the body language. Do express feelings, be honest about feedback, but try and keep it calm. Should one accept? Listen to well-wishers by all means, but people are best advised to make up their own minds. Let the person know where they stand—provide the closure. If further actions are required, state what they are. If accepted, close the chapter, let it go and move on.

So, what doesn’t work? The “sorry, but". Am sorry, but my assistant goofed up. Am sorry, but the server was down. Am sorry, but the other guy was an idiot. That’s shifting blame to someone else, it’s just an excuse. Also, remember, the apology is not just the words—it’s how they are said, the tone, that demonstrates whether the words are actually meant. Perhaps the worst apology is the “I’m sorry you feel that way"—which is really just shifting the blame to the person being apologized to.

And here’s the catch. Unfortunately, even the most heartfelt, sincere apology sometimes may not do the trick, and the job, customer or reputation may still be lost. The trolls, or the haters, may continue to tweet away. Don’t expect an immediate fix or forgiveness—sometimes it’s going to take more than one apology—and then some. And sometimes sorry isn’t enough, sometimes you actually have to change.

And then again, if you don’t bite the bullet and say the words, you lose anyway.

Write to Sonal at careercoach@livemint.com