Translating just one writer is like doing the daily crossword. In this anthology, the translator has been faithful to 88 different voices

Don’t read this book. Not if you want to continue in the solipsistic trance of instant gratification that passes for urban cool. The Tamil Story isn’t even a book, just masquerading as one. It is, really, a home invasion.

For the past fortnight, 88 writers have usurped my space. They are uncomfortable folk to live with: observant, edgy, argumentative, sardonic, angry. They are also uproariously funny, affectionate, indulgent of all my weaknesses, and oh, how they revel in the stink of life. For a fortnight, I’ve lived as one of their characters, but as I begin to write this, they sulk in critical silence. I’m forced to agree: This is going to be an unfair review. Each story in this book deserves a review of its own. How will I manage that?

The title worried me. The Tamil Story? Is there such an animal? A narrative classifiably Tamil, recognizable in English as Tamil, identifiable in memory as Tamil?

Today, when fragmentation is the law and walls come down everywhere one turns, such an identity is a presumed given. The rest of the country, thanks to Hindi cinema, cherishes a Tamil stereotype. The Tamilian reacts to this insult with a disdain that is the flip side of pain. That effectively ends the conversation—but it begins the soliloquy of injured Tamil pride, exclusive and so darned insular, it can be advanced xenophobia at its pathological worst.

Besides, consider the baggage. This most ancient of Indian languages has a living literature that is almost as ancient. Early Sangam literature, confidently dated to the second millennium BC, is a very mature codification of grammar and poetics. By then, writing was already a very old game. Who wrote, and for what kind of readership? 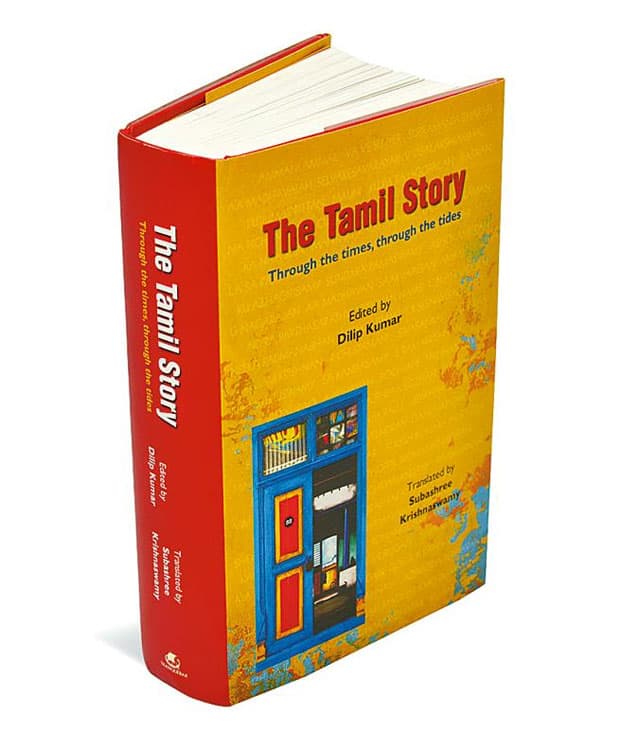 A clay pot from the third century BC has the owner’s name on it. Nakan, the toddy tapper, wrote out a neat label to stake his claim to the toddy. That puts a totally different spin on literacy, doesn’t it? If writing was, in Nakan’s time, a common skill, there must have been plenty to read! Much of what Nakan may have read, still is.

New translations of Sangam poetry appear almost every year. Paradoxically, the very breath of Tamil expression is immediacy. Tamil thrives on street cred—perhaps it did in Nakan’s time too. Innovation and absorption have ever been the nature of this beast, despite the most determined purges towards exclusivity.

When such a language lends itself to a story, whose story will it tell? Freed of the constraints of geographic and linguistic circumstance, is there a Tamil narrative, a logic of thought and expression that can be unerringly diagnosed as Tamil?

Long ago, an editor glossed idli as “fermented rice cake" in one of my books. The scar still throbs each time I pick up a translation. The horrors of over-explanation can only be matched by the opacity of the inexplicable. Would The Tamil Story navigate past such hazards?

The translator, Subashree Krishnaswamy, and the editor, Dilip Kumar, are both familiar names to anyone who has read Bhasha in translation. Dilip Kumar is an acclaimed voice in Tamil literature. As editor of the Manas imprint, Krishnaswamy opened up a treasury of Bhasha writing to monolingual readers like myself. Her Tamil translations have been widely published. The very expertise of these authors made me even more sceptical of the book’s ability to transcend barriers. Not only the barrier of Tamil, but barriers within the language itself. As with other Indian languages, Tamil is a catch-all term for the many languages it contains. The dialects of geography, economics, caste, and creed are legion. You can slot a person before they’ve spoken a line—but if, and only if, you are familiar with the language itself. A quick peek at the authors’ index revealed how diverse they were.

Here were 88 very distinctive voices, yet as I began reading, I found they had something in common that catapulted me into a hyper-alert state of extreme pleasure. And that compelling something was their unstated manifesto against the soft focus. Each story had something urgent to say, and said it with an assured brevity. Stripped of rationalizations, the truth emerged naked and beautiful, to command attention. The stories could be rich with humour and tender with emotion and still remain unsparing and cruel.

They also share a motive force. Hunger is the scalpel that dissects the human condition. The deprivations induced by hunger become the idiom of thought and action equally in the hungry and the affluent. It is used as the currency of affection, and even as the driving force of humour.

In Pudumaipittan’s grim portrait of the city by night, The Great Graveyard, hunger and death are curiosities to a four-year-old and invisible to her angry father. If Indira Parthasarathy’s devastating Husband, Hunger, Human Bonds is a brilliant exposé of the blindness of self-righteous charity, Sujata’s In Search Of Truth demolishes the rationalizations of that blindness.

Hunger also controls the narrative of grief. Ambai’s Yellow Fish and Shenbagam Ramaswamy’s Saga Of Sarosadevi are two very different takes on the death of a child. Hunger takes centre stage in several ruthless stories that deal with the displacements of old age, but to me the most frightening, R. Chudamani’s Outside, Pouring Rain, deals with children.

Prejudice is everywhere, in every moment of every tale. Bama’s Judgement, Rajam Krishnan’s Fisher Girl and Na Muthuswamy’s Ghee Stain are unforgettable.

Patriarchy, in all its pathetic tatters, cuts a tired swagger in the book. Governor Pedda, Meeran Maideen’s delicious account of the governor’s visit to Dargah Street, is a sort of triumph for all the suffering women in this book, not just Peeran Pedda.

As an Indian writing in English, I’m challenged and bedazzled by the ways in which Bhasha controls the rhythms of spoken and written English. An English book that calls itself The Tamil Story not only acknowledges a story that’s identifiably Tamil, but also proclaims its transparency. It places this narrative in a twilight zone from which it can morph into any other language, and still read the same. It allows their story to be read as yours or mine.

The very purpose of translation is to liberate thought from the shackles of language. Translation begins with them and ends in us. But how far can such a liberation retain the writer’s own expression?

Writing is as much about language as it is about thought. It is not unusual for writers to react indignantly to the very idea of translation. To achieve this fidelity in an anthology is even more daunting. Translating one writer, I suppose, is like doing the daily crossword, where, on long acquaintance, the compiler’s mind is practically home ground. But how do you stay faithful to 88 different voices?

Krishnaswamy’s introductory note answers this question, and Dilip Kumar’s thoughtful foreword is educative without being didactic, but they say nothing about the labour of sifting through a forest of stories to pick the right pixels for this panoramic read.

I wonder if the choice of Ammani Ammal’s Expectation And Event as the first story in this anthology was cautionary. Rest assured, the tree in the tale would have been delighted to belong here.

Yes, I agree. This is an unfair review. Dismiss it. Read the book.

Kalpana Swaminathan and Ishrat Syed write together as Kalpish Ratna. Their most recent book is Room 000: Narratives Of The Bombay Plague.