The new rhythms of Sonagachi

The new rhythms of Sonagachi

For what is sometimes referred to as the world’s oldest profession, a mere passage of two decades can seem irrelevant in the life of Sonagachi—the red-light area in Kolkata and among the largest brothel districts in Asia.

Yet, in these 20 years, 38-year-old Swapna Roy has seen a change in the way people refer to her—from being sneeringly mentioned in the coarse Bengali equivalent of slut, Roy today is a jouno kormi—a sex worker.

Roy’s daylight hours are busy—every day she is on the field in areas like Ultadanga and Janbazar as the joint coordinator of a project which sensitizes around 3,000 sex workers on safe and hygienic practices. She also keeps a tab on her two schoolgoing children, one of whom got a first division in the Madhyamik examinations last year. There is no unease about the business of her sundown hours. “We have come to realize that sex work is like any other work and I’m like any other worker. In these two decades, we have learnt to appreciate this." 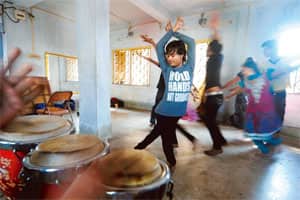 Sex workers are the primary office bearers and stakeholders at DMSC, and in the 20 years of its existence, the organization has been responsible for bringing out into the streets—and into middle-class drawing rooms, through newspaper and television coverage—the issues facing sex workers, including the demand for legal sanction for the profession.

“You will find bank managers trying to woo them for their accounts and senior police officers calling up to seek appointments. Many of them are frequent fliers to Delhi and some travel abroad every three months on official work. There has been a cultural shift in society’s perception of sex workers," says Shubha Ranjan Sinha, a senior DMSC official, sitting in the spacious front room of Durbar’s Nilmoni Mitra Street office, near Sonagachi. Posters with slogans like “Liberty, Equality, Sexuality" and “Only rights can stop the wrong" adorn the walls.

The three-storey office is abuzz. The next day, 15 February, would mark 20 years since a team of medical professionals, led by Smarajit Jana of Kolkata’s All India Institute of Hygiene and Public Health, visited Sonagachi on an HIV intervention research study. In due course, Dr Jana realized that for the sex workers, their children’s education, access to financial services and fending of police harassment and torture by local thugs was more important than urging a client to use a condom. So Dr Jana founded DMSC, with sex workers as stakeholders, based on the value of “collective bargaining power". From 12 members in 1995, DMSC draws its current strength of 65,000 members from 48 branches across the state, each headed by an elected secretary, according to Dr Jana. 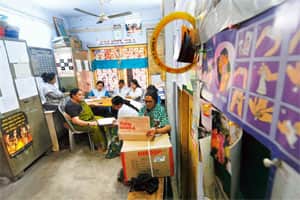 There is much to cheer about, it seems. In 1995, Usha, the consumer cooperative society and micro-credit programme under DMSC, convinced the Bengal government to alter the state’s cooperative law to register it as a sex workers cooperative instead of being wrongly labelled a housewives cooperative. With more than 5,000 members putting in their small savings, Usha, as of 2006-07, had an annual turnover of ₹ 9.75 crore and has disbursed ₹ 2.12 crore in loans to members. This came against the monopoly of Sonagachi moneylenders, some of whom charged 300% interest against loans.

Some sex workers also have health insurance, while some have got voter identity cards with the Election Commission of India recognizing their Usha membership as valid identity proof. State Bank of India has also begun to recognize sex work as a profession while opening accounts, says Dr Jana.

DMSC also runs 17 non-formal schools for children of sex workers, and two hostels at Ultadanga and Baruipur. There are regular teachers who give tuition to boarders (students who are pursuing higher education) in different subjects.

Members of Komol Gandhar, DMSC’s cultural wing dedicated to dance, drama, mime and music and run by the children, get invited regularly for paid shows. Eminent theatre personalities like the late Badal Sircar and Rudraprasad Sengupta have earlier trained its theatre unit. The Durbar football team, largely comprising children of sex workers, has for the first time in the 2011-12 season, participated in the nursery football league conducted by The Indian Football Association, West Bengal. They have won six of the seven games they have played so far, says coach Biswajit Majumdar. Some of the young footballers, says Majumdar, have represented Bengal at national-level junior championships. Mrinal Kanti Dutta, one of the 12 founding members of Durbar, is the author of three non-fiction books, one of which is based on his experience of living in the Kalighat red-light area with his mother. While the three books have been published by Durbar Prakashani, the in-house publishing wing which has around 25 titles and brings out a popular monthly magazine, Dutta’s forthcoming novel, Pakhi Hijrer Biye, will be launched soon by a well-known College Street publisher. Dutta dropped out of college out of fear of getting ridiculed after his batchmates spotted him in the Kalighat red-light area.

Yet, on various occasions, Durbar has been hauled up for its insistence on legalizing sex work, its inability to eradicate violence and exploitation in red-light areas, and for not disclosing to patients the positive results from HIV tests. As Dr Jana says, HIV+ results are not disclosed only on occasions when Durbar has to follow norms under National AIDS Control Organisation’s (Naco) “unlinked anonymous" testing programme, even while admitting that more needs to be done to stem violence.

The terrace party comes across as a zone that is manifestly liberated from the moral scruples of the greater society that surrounds Sonagachi. Here, taboos are taboo and the fringe of Kolkata life—sex workers, their children, cross-dressers and transgenders —are comfortably cocooned through their commingling.

Part of the confidence and inspiration comes from the story of Bharati Dey, secretary, DMSC. Dey is a frequent flier and has already exhausted the pages of two passports. As a sex worker in the mid-1990s, Dey is well-known for the movement she launched in 1997 in the Naihati- Barrackpore industrial belt against the mafia and political extortion. As she speaks, words like attempted murder, lynching, revolver and gang rape flow effortlessly—almost as if she is nonchalant to the indicators of her earlier existence. But, as Dey admits, it is life’s experiences that have shaped her and these days words and phrases like AGM (annual general meeting), Geneva Conference, donor agencies, advocacy and human rights, are uttered as easily.

“We don’t dissuade adult and willing girls from entering the profession. It is easy to say sex work is bad, but most girls come from poverty stricken families and are uneducated," says Purnima Chatterjee, who sits on a self-regulatory board, which works as a watchdog body in all DMSC branches against trafficking and introduction of minor and unwilling girls into the trade. “You don’t expect us to find work in Writers Building do you?"

The barb against Writers Building, the seat of government in Bengal, seems well-timed, though possibly unintended. The newspapers of the day are flooded with reports of Bengal chief minister Mamata Banerjee prematurely dismissing as “concocted" allegations of rape of a 37-year-old woman in a moving car. The allegations were later proved to be true. The state sports minister, Madan Mitra, also finds mention in newspaper reports after questioning the moral code of the rape victim in a television interview: “She has two children, and so far as I know, she is separated from her husband. What was she doing at a nightclub so late in the night?" By all parameters, there is a lot that women in general are up against. “We know of so many girls who got raped when they went to work as household help or in factories. Many of them opted to come to Sonagachi and get paid for sex. Who are we to stop them?" retorts Pushpa Sarkar, who works at Avinash clinic (for sexually transmitted infections) run by Durbar and is also on the self-regulatory board.

It’s close to noon, and outside the clinic, where we meet, Sonagachi is stirring after what must have been yet another late night out in an area that is home to an estimated 11,000 sex workers. Bare-bodied men soap themselves frenetically at a public bath, a juice vendor peels the skin off pineapples, rickshaw-pullers wait for passengers, petticoats and blouses are collected from clotheslines in surrounding brothels. Crows and vultures fly above an overflowing garbage dump next to a black granite-faced building named Night Lovers.

Through this scene, 23-year-old Mita Mondal’s thin voice can be heard. Mondal is the lead vocalist and face of the Durbar band. She was rescued as a minor from the streets of Sonagachi eight years ago. The band practises on the vacant third floor of the building which houses the Avinash clinic, and the strident music filters out of the open windows to the streets below. Mondal occasionally goes off key and the conga player misses a rhythm or two. But everything falls into place when Mondal begins singing the Durbar anthem. It seems well-rehearsed, the dholak player shakes his head like a wound-up toy, and everybody mouths the chorus lines amid a sudden outburst of collective energy.