A glimpse at the list of winners of the Nobel Prize in literature in the last decade shows that the Swedish committee that adjudicates the prize is often willing to honour highly feted, widely read and hotly tipped writers, who for years have had “Nobel Prize" tagged to their names. V.S. Naipaul is one such case, and so are J.M. Coetzee and Orhan Pamuk.

But just as often the committee throws up a name that the vast majority of readers have never heard of, and to my mind this is the more interesting, exploratory side of its work. Who had heard of the Hungarian writer Imre Kertesz or the Austrian writer Elfriede Jelinek before they won the award in 2002 and 2004, respectively? 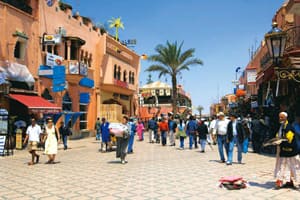 Wanderers: Parts of Le Clézio’s Desert, about a warrior tribe, is set in Morocco. AFP

What the committee is saying, in effect, is that great literature, always being the work of an individual mind, can come from all kinds of unlikely places. Prizes such as the Nobel can be a way of equalizing the iniquities of the literary market and the entrenched power of certain languages and cultures in the world today.

Le Clézio (many of whose works are now available once again in English translation after being out of print for some three decades) is an especially difficult writer to slot because, in addition to the difficulty and often wilful obscurity of his work, there is the difficulty and obscurity of his biography. Although he was born in France, and writes in French, he also claims allegiance to Mauritius, where one side of his family comes from, and where he still lives part of the year. A restless wanderer from the days of his youth, he seems not to have needed a “home" for his work, nor to have cultivated a relationship with a single place or culture as most novelists do. Indeed, his itinerancy—he has spent time in and written books set in Mauritius, France, Mexico, Panama and Africa, a world writer if there ever was one—might seem to resemble that of Naipaul, except that he mostly writes fiction, and his work is more sympathetic to the marginalized people and cultures who are his subjects than Naipaul, with his glowering eye, is.

Among the distinctive emphases of Le Clézio’s writing is his engagement with what he has called cultures “broken by the modern world"—all the tribes and people thrown out of joint by the encounter with colonialism, Western rationalism and the power of the nation state (a good parallel in an Indian context might be someone such as Mahasweta Devi or Gopinath Mohanty, both of whom have written extensively about the problems of Indian tribals). This willingness to move across a boundary, to invert a dominant power relationship, and to imagine the life of the “other" sympathetically from within is best seen in Le Clézio’s work in his novel Desert (1980), thought to be one of the central novels in his oeuvre and now translated into English for the first time by C. Dickson.

A great traveller himself, Le Clézio produces a very close and painstaking description of human beings on the move across a landscape. His attention to the constantly shifting and turning shapes of the universe—no other novelist spends as much time detailing the changing colours of the sky, or the particularities of the light—turns his story into a cosmic drama. Le Clézio is also one of those writers who work absolutely on their own terms. His book is slow-moving and often difficult going, but the writing is frequently beautiful and alert, as when he speaks of the wind that “draws the yellow grasses aside like a hand passing over them", or hears “the faint swish of sand running down the grooves in the rocks" on a cliff. If you consider yourself an ambitious reader, there’s no reason to deny yourself an encounter with this very independent-minded and distinctive sensibility.