A battle against rock bees

A battle against rock bees

If you are human, bees are a relatively bland species. They evoke neither the affection of squirrels nor the aversion of snakes. Bees are nondescript, if a little tiresome. Most people don’t notice these flying insects that belong to the genus Apis, except perhaps to swat them. Unless you live among them. 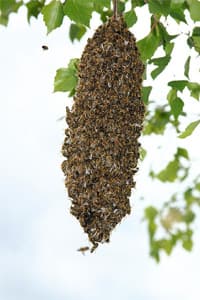 I am no bee lover but I don’t dislike them either. But the pesticide model doesn’t seem to be working so I have decided to become the unofficial Bee Lady of my building. My partner in this venture is a product designer called Sridhar Dhulipala who graduated from NID (National Institute Of Design) and went on to do user interface design for a number of companies in Bangalore. Dhulipala lives on the top floor of our building and has giant beehives just outside his balcony. With his spectacles and wide smile, Dhulipala has the maverick enthusiasm of a designer-turned-software guy.

This is the story of our two-person crusade against the common honeybee.

A search for bee-keepers led us to the association for bee-keepers in Bangalore and Raghavendra Gadagkar, a JC Bose national fellow and professor at the Indian Institute of Science, Bangalore. Gadagkar has a range of interesting links on his website, including one about “social insects" that anyone who is interested in ant colonies and team building ought to see. A cold-email to Prof Gadagkar taught us that what we had in our building were “rock bees" that could not be domesticated and managed by traditional bee-keepers.

Bangalore Rural district, which encompasses seven taluks, has about 1,300 bee-keepers who have domesticated the Apis cerana indica. Tamil Nadu ranks first in bee-keeping compared with neighbouring Kerala and Karnataka. The Kurumba tribals who live in the Nilgiri hills are master honey gatherers. Our first thought was to hire a Kurumba tribal or drive a bee-keeper down from Channapatna to get some expert advice. Before we could execute this, we had volunteers instead. Migrant workers from the North-East spotted the hives and volunteered to evict the bees in exchange for free honey.

Our main point of contact was a man named Mondal who carried a cellphone but was never reachable when we tried calling. Mondal and his band of merry men would come at periodic intervals and smoke the hives. They told us that they burned a certain leaf which irritated the bees and caused them to fly away. Once the giant yellow hexagonally pockmarked hive (a thing of beauty, really) was exposed, Mondal would stand atop Dhulipala’s 10th floor balcony and take heart-stopping risks. His men refused to wear a harness and instead teetered on the balcony like drunks who had eyes only for the honey. They would cut off the beehive using a sword, break it into parts and dump the whole thing into an aluminium can.

At first, all the ladies in the building lined up to buy fresh local honey but then a discussion broke out about whether the honey was pasteurized and whether honey gathered from our pesticide-laden, albeit ornamental, flowers was edible. Soon, everyone stopped buying the honey. The gatherers stood outside our gate and sold it for Rs160 a kg.

After a few such instances, the Bee Committee, aka Dhulipala and me, decided that Mondal’s ad hoc solutions were not working. Dhulipala then began telephoning for contacts at the College of Agriculture in Hebbal, Bangalore. They put us in touch with an assistant professor, R.N. Kencharaddi, who specialized in the social behaviour of bees. This is what Kencharaddi taught us, and it falls under the “did you know?" category. Bees are a beneficial species and so specific pesticides have not been developed against them. That our building has so many beehives is a sign of a robust ecosystem, said Kencharaddi, one that we should cherish, not destroy. In fact, America and Europe are having a tough time because their honeybees are dying from a mysterious infection called Colony Collapse Disorder. India has five species of bees—mellifera, dorsata, cerana indica, to name three. Our bees are hardier, hence no colony collapse.

Bees are marvellous creatures. They spend a bulk of their time trying to keep the hive at a specific temperature of 34-36 degrees Celsius. If it gets hotter outside, they insert water droplets into the hexagonal cells and flutter their wings to cool down the hive. If it gets cooler outside, they crowd together to raise the temperature through body metabolism. Most important from our point of view, bees are migratory insects. As the season turns, our hives will be gone.

The reason the bees keep coming back to the same place to build hives is because they sense the beeswax that is still stuck to the ceiling. The queen bee sends a swarm of “scouters" to find good locations for her hive. The scouting bees first do a trial run which I have personally witnessed. They come in a swarm like locusts and quickly hang from the ceiling to create a temporary hive. If it works, they go back and report this location to the queen, who gives the go-ahead.

Dhulipala got a mad idea. What if we buy yards of muslin cloth and tamp it to all the ceilings in our building so that when the scouting bees start to build a hive, the muslin will drop and they will realize that it cannot hold their weight? So Sridhar and I roamed JC Road on one hot afternoon, and had detailed discussions with the tarpaulin and cloth dealers there. We finally found what we were looking for at the City Market: yards of the fabric used for Chinese fishing nets. We tried a prototype on Sridhar’s balcony. What we didn’t know was that Chinese fishing nets are a pain to cut to the size and shape of a balcony. Thankfully, Sridhar’s wife is a fashion designer and cut it to size.

So far, the bees haven’t reappeared on Dhulipala’s balcony. But we still need to figure out how to tamp down these damn fishing nets on all the exterior ceilings of our building.

Shoba Narayan’s bee saga continues. But her building has learned to coexist with these honey-gathering creatures. Even the kids aren’t fazed. Write to her at thegoodlife@livemint.com