The music rooms of Girgaum

For much of the 20th century, Laxmi Baug, a handsome one-storey building in the heart of Girgaum, a locality in south Mumbai, was one of India’s pre-eminent venues for Hindustani music concerts. The building’s hall on the ground floor reverberated with the music of the century’s top musicians. From the late 1940s to early 1950s, these included women singers of the Jaipur-Atrauli gharana, such as Kesarbai Kerkar, who was by many accounts the highest-paid vocalist of her generation, and Mogubai Kurdikar, the mother of the great contemporary singer Kishori Amonkar, as well as the foremost Agra gharana singers, Faiyaz Khan and Latafat Hussain Khan.

The building, which celebrated its centenary year in 2013, was constructed by Shantaram Narayan Dabholkar, a landlord who had inherited a lot of money. Shantaram’s grandson, Satchidanand Dabholkar, 82, one of Laxmi Baug’s three current trustees, remembers attending several mehfils, or soirées, there. The audience sat on mattresses covered in white sheets, reclining against bolsters. Some listeners sat in the balcony overlooking the hall and others spilled out on to the pavement.

“Concerts often began at 9pm, broke for an interval at about midnight, and went on until 2am, and sometimes, later," says Dabholkar, a retired advertising professional who lives near Laxmi Baug, in another building that his family owns. A graduate of fine arts from Mumbai’s Sir JJ School of Art, Dabholkar remembers his painter friends, V.S. Gaitonde and Mohan Samant, often choosing to spend what was left of the night in Laxmi Baug, sleeping on the mattresses after a concert, heading home only in the morning.

Laxmi Baug was part of an exciting world of Hindustani music that evolved in and around Girgaum from about 1850 onwards, as Mumbai became one of the country’s most important hubs for the art form following the decline of the Mughal Empire and the princely states in the 18th century. As tabla player and music scholar Aneesh Pradhan points out in his book Hindustani Music In Colonial Bombay, the city became the home of new kinds of patrons, such as wealthy merchants and a growing middle class who paid to attend ticketed concerts; it offered opportunities for musicians to teach both these groups, and the city was the headquarters for new recording companies. All India Radio, located in the city, also offered many musicians employment.

A forthcoming exhibition, Making Music, Making Space: Hindustani Sangeet In Bombay/Mumbai, curated by academic Tejaswini Niranjana (see box), also covers some of this ground. The exhibition, which starts on 15 June, is a milestone in a longer, ongoing research project that Niranjana began about three-and-a-half-years ago to understand Mumbai’s relationship with Hindustani music. Along the way, she decided to present her research and that of her collaborators not only through the traditional means of publishing peer-reviewed papers but in other ways, such as through this exhibition and eventually an e-book.

The exhibition, which will comprise photographs, videos of interviews, and a map, shows how Bombay (now Mumbai) offered a nourishing environment for the art form to thrive, focusing on the physical spaces associated with the music. Niranjana also argues that Hindustani music influenced the city. First, mehfils and ticketed concerts united people of different social backgrounds who shared a love of music, thus becoming a means for creating a public domain in the city.

Second, Hindustani music became a shared language and a common source of cultural identity for people from varied linguistic backgrounds—both musicians and listeners. The audience at a Laxmi Baug concert, for example, would have included wealthy Gujarati-speaking merchants—Hindu, Parsi and Muslim—members of the Marathi-speaking middle-class, Konkani-speaking Chitrapur Saraswats, Urdu-speaking Muslims and Kannada-speaking aficionados.

Hindustani music’s links with the entertainment industry added to the diversity of its world. It was closely connected with the Parsi theatre, which used Urdu in the early 20th century, and Marathi musicals, the sangeet-nataks. Both theatrical communities used raga-based music, and employed classical singers to train their actors. Following the decline of these theatrical forms, Hindustani music became associated with the Hindi film industry.

Over time, however, not only Laxmi Baug but Girgaum as a whole began losing its status as the city’s pre-eminent hub for Hindustani music. As the city expanded northwards after independence, other areas, such as Dadar and Vile Parle, became equally active. After the 1990s, the city’s economy began changing, and the consequent demographic shifts contributed further to the dispersal of musical activity.

For the past three decades, Laxmi Baug has had few public concerts. Its trustees have continued to maintain the building well, but it is now mainly a venue for weddings and other private functions. The hall is too small for concert audiences today and the locality does not have enough parking options, says Dabholkar, although these are only part of the explanation. For the duration of the exhibition, however, the trustees have generously allowed the hall to be used for three concerts.

Today, few people in the area remember Laxmi Baug’s links with Hindustani music. Sudhir Mehta, who has worked for the past two decades at an auto-parts shop across the street, has no idea about this history. “All I can see is that it is maintained well and all communities use it for their functions," he says. Down the street, a resident of a building, Suresh Jain, 60, who was born there, has a better inkling. A retired government official, he believes Bollywood actor Govinda’s late mother (who was classical singer Nirmala Devi) performed there. “And perhaps Bismillah Khan," Jain says.

The story is similar with Trinity Club, another former famous venue for Hindustani music nearby, which was later renamed the Trimurti Sangeet Mandal. It is a room located in a chawl on Pandit Bhaskarbuwa Bakhale Path, named after the famous singer. According to Niranjana’s research, “the kholi was dedicated for the use of musicians by one Bodas, who worked for the Shaw Wallace Company and was a fan of Hindustani music, and requested Bhaskarbuwa Bakhale in 1907 to initiate musical activities in the chawl". It was meant for musicians from out of town to use as lodging when they came to Bombay for a concert. Over time, intimate concerts were also held there. But two women residents of nearby buildings did not know who Bakhale was and had not heard of Trinity Club. Today, the chawl is slated for redevelopment, and the club will be accommodated in the new structure, says the club’s long-standing president, Balasaheb Tikekar, 88, himself a singer who was employed with All India Radio. 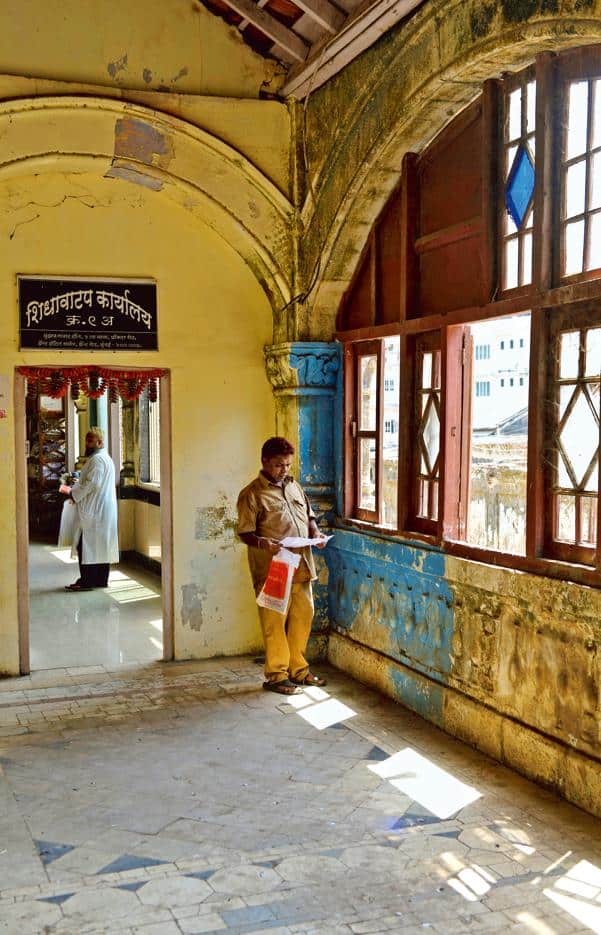 “I have not heard about Muzaffarabad Hall," says Mohammed Baldiwala, 40, a man standing in line at the ration office trying to get his address changed. The businessman has grown up in the locality and lives in a newly developed tower nearby. “I did not know this area was known for classical music. I only know that it is famous for computer parts and electronics."

A few hundred metres away, Raghunandan Betarbet, 78, says he has heard of an orphanage that was located in the precinct on which the ruins stand. “I thought the hall was used for weddings," he says. His daughter learned from the late eminent vocalist, Dinkar Kaikini, who also headed the Bharatiya Vidya Bhavan music school nearby. That is not so surprising, given that Betarbet lives in a housing colony originally meant for Chitrapur Saraswats, a small community with a disproportionately high presence in Hindustani music. Kaikini himself belonged to this community.

The exhibition highlights the role of these venues and others, for they were the physical spaces in which Hindustani music brought people from different backgrounds together. As these spaces disappear or their functions get redefined, such an exhibition points to the need for a more permanent reminder, such as a museum, of not only how Mumbai sustained Hindustani music but how it, in turn, invigorated the city.