Like many action-packed franchise films, you can predict the bedrock of the fourth outing of Mission: Impossible. Ethan Hunt returns and he is still as willing to accept any mission, no matter how dangerous or in which part of the world. Helmed by director Brad Bird, Mission: Impossible—Ghost Protocol (MI 4) opens in Budapest, and travels to Moscow, Dubai, Mumbai and the US. 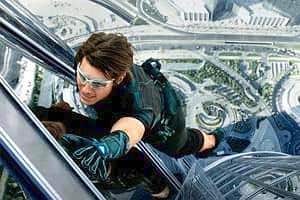 MI 4 sticks to the formula, with invincible agents, bad guys, fast cars, gadgets and leggy women. But it’s the three-set action pieces—starting with Cruise’s introductory fight scene and the Burj Khalifa sequence—that distinguish MI 4 from other films of the genre.

The adrenalin-bursting action is such that you are willing to forgive the shallow story built on the weak spine of US-Russian nuclear war tensions. Hunt and his team (Simon Pegg and Paula Patton) are hot on the heels of Kurt Hendricks, a madman determined to bring the world to the brink of nuclear war. Michael Nyqvist’s lifeless portrayal of the character is one of the film’s striking weaknesses.

Hunt will run through sandstorms if that is what is needed, leap off the world’s tallest building and crash BMWs at back-breaking speed, if it will mean thwarting Hendricks’ plans to trigger nuclear war. When the IMF is shut down, and the ghost protocol has been invoked, Hunt and his team are forced to function as rogue operatives. Hunt also has a new member—an analyst, played by Jeremy Renner. As they try to beat the clock to a nuclear showdown, some significant cameo appearances are made by the likes of Tom Wilkinson, Ving Rhames and Anil Kapoor. Kapoor plays the flamboyant and flirtatious businessman, Brij Nath, with an edge of mischief and humour.

Action-packed: MI 4 meets expectations, but doesn’t go beyond them.

But the true revelation is director Brad Bird. He takes the reins of his first live action film, thus far having only directed animated characters in The Incredibles and Ratatouille, and proves he can work with human beings too. The bad script can be forgiven because of the roller-coaster ride MI 4 is.