Flexing my toes in hot water with salt—bliss for aching feet as you know—I seriously contemplate, for 2 full minutes, bribing Hyat Singh to accompany us as hot water supplier-cum-cook-cum-soothing presence for the rest of the trek.

We had staggered into the ramshackle public works department (PWD) rest house after a 6-7-hour-long walk on a rocky, unshaded path to be greeted like much-loved family by Singh: He’d plied us with cups of reviving tea, plates of pakora, buckets of the above-mentioned hot water and, when it started to get chilly, built a cosy fire, treated us to delectable ghee-doused rotis and practically tucked us into bed.

“Do Pindari (in Uttarakhand), easy-peasy," they’d said when my husband and I were shopping for a route accessible to lapsed trekkers. But after the first day’s walk to Dhakuri—10km of steepish uphill to a small pass (Dhakuri Khal) and then 1km precipitous downhill—I feel distinctly unenthusiastic about the five or six days that lie ahead. Singh’s ministrations, however, lift a lot of the gloom, and the sunset over the peaks dispels the rest of it: the sumptuous range laid out at the first camp spans Bhanwati to Durgakot, Maiktoli to Nanda Kot. 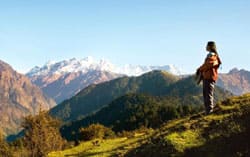 This is the most inhabited stretch of the 84km walk. Village kids say “Namaste, mithai (Hello, sweets)" and for a moment I think this is a special greeting in these parts. But they are only asking for sweets and my day’s stock is soon over. One group gets aggressive when I tell them so and tries to pull out the water bottles from my rucksack’s side pockets. I’m guessing these little terrors will grow up to start a movement to make Pindari a separate state, which will, of course, give them the licence to continue extortion activities.

The Kumaon Mandal Vikas Nigam (KMVN) and the private guest house we’d hoped to stay in at Khati are full, so we settle for a dilapidated PWD room, making ourselves comfortable as best we can. But a group of schoolchildren camping nearby ensure the place is soon ringing with Hindi film numbers in that accursed game, Antakshari.

Urgent action is called for. We decide to stay back one more day at Khati to allow this noisy bunch a head start, and use the day to hike up to Bajlingdar bhagyal, an undulating expanse of grass on a crest with views all around. As we soak in the sun and vistas of the snow range, Kishen Ram, our guide for the day, talks about life in a village bypassed by motorable roads. When someone falls sick in Khati, the whole village bands together to bundle the patient into the only palanquin (also used for weddings) and groups of four take turns carrying it. It’s a hard life but Kishen still returns to the village after a stint in the plains, up to as far as Bangalore.

The next day is fairly long: Khati to Dwali and on to Phurkiya, a total of 16km. The first leg is the easiest stretch of the trek, a gradual up and down, with the Pindar river rushing alongside for long stretches. There’s a spurt in the frequency of waterfalls, some picturesque wooden bridges to cross, and masses of ferns and bamboos. Now we are all fired up and, at Dwali, the third camp, we barely stop for a quick lunch of cheese and crackers by the river. On to the next leg then, mostly uphill, to the last proper camp, Phurkiya. 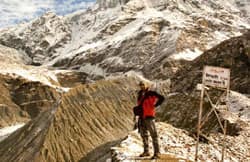 The end of the trail at Zero Point, Pindari glacier. Rimli Borooah

So it is appropriate that we are soon at Pindari Baba’s ashram, 1km short of Zero Point. Looking amazingly young for someone who’s been up here for 20 years, the generous babaji gives us coffee—coffee! At 12,000ft!—and sends us on our way, with instructions to stop by on the way back.

At Zero Point, a sign warns “Aage khatra hain (danger ahead)", and we are happy to heed it: The trail falls away most alarmingly beyond the signboard. On the left, the Pindari glacier nestles snugly between Nanda Khat and Chhanguch. Earlier, one could practically walk upon the glacier; now the snout is several metres away, and supposedly receding at the phenomenal rate of 23m annually, more proof of global warming.

The glacier’s moraine and immediate vicinity is an imposing lunar landscape of ridges and craters in red-brown and grey, topped by pristine white. And to its left and right, a posse of peaks—Baljuri, Panwali Dhar, Nanda Khat, Chhanguch, Nanda Kot—magnificently snow-clad.

Awestruck and silent, we wander back to babaji’s place to be further stunned by the feast laid out for us—puri chhole, halwa, coffee. No wonder the Pindari trek’s so popular. Now all that remains is to go back, and all hell breaks loose as rain and hail turns the trail into slush and muck. But who cares.

The Pindari glacier lies in Uttarakhand’s Kumaon region. The trailhead is the village of Loharkhet. The trek is normally broken up thus:

Phurkiya to Zero Point (the “pinnacle") and back, up to Dwali, 19km

Dhakuri to Loharkhet, 11km; you can hire a cab that day itself to your next stop