On current form, Cristiano Ronaldo is untouchable. The 26-year- old Real Madrid forward has already broken every goal-scoring record of the club, surpassing the legendary Ferenc Puskas this year as Madrid’s highest scorer, breaking the record for the most goals scored in a season in La Liga, and notching up four hat-tricks in the 2011-12 La Liga season. Portugal will be hoping Ronaldo can turn on that shock-and-awe form for his country when they take on Bosnia-Herzegovina for a two-legged play-off (11 and 15 November) that will decide who gets to play at Euro 2012. 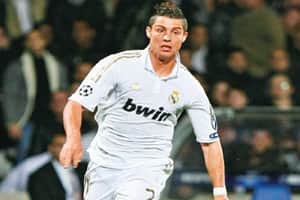 Shock and awe: Ronaldo has been unstoppable for Real Madrid. By Claude Paris/AP

Portugal are taking no chances because failing to qualify for Euro 2012 will be a sporting disaster for one of Europe’s top footballing nations. After missing out on automatic qualification following a 2-1 defeat against Denmark, Portuguese coach Paulo Bento has a full-strength squad to choose from, including Ronaldo’s Real Madrid teammates Pepe and Fábio Coentrão, as well as striker Hugo Almeida, who plays for Turkish club Besiktas JK. The trio were not available for the Denmark game because of injuries.

“I don’t like the favourites’ tag," Bento said at a press conference in Zanic on Tuesday. “We know anything is possible and have a lot of respect for Bosnia. They’ve come far and no doubt want to go further, but since that day (the defeat against Denmark) our thoughts have been on the games against Bosnia."

Like Bosnia, the Republic of Ireland too are driven to make it to their first European Championship in over two decades. They have easier opponents, football minnows Estonia, for whom the play-off is the most high-profile match the team has played in its 91-year history. But the Irish have a poor record in play-off qualifiers, having lost four of their last five, including a controversial loss against France for a place in the 2010 World Cup, where Thierry Henry scored the only goal with his hand. Ireland will be bolstered by the return from injury of their star striker Robbie Keane, but will miss three English Premier League players—Newcastle United striker Leon Best, who is awaiting the birth of his first child, Wolverhampton Wanderers’ striker Kevin Doyle, who is suspended for the first leg, and Sunderland’s John O’Shea, also struggling with an injury. Asked if Ireland are more or less through to Euro 2012 because of the weak competition they face, coach Giovanni Trapattoni produced a gem at a press conference on Tuesday: “Be careful of the cat. Don’t say you have the cat in the sack when you don’t have the cat in the sack."

That is probably more appropriate for what, on paper, looks like the most mouth-watering of the play-off clashes: Turkey versus Croatia. Remember Euro 2008? Turkey had a heart-stopping run to the semi-finals of that tournament, winning through an added-time goal against Switzerland and then overturning a two-goal deficit against the Czech Republic. They then rocked Croatia’s boat in the quarter-final with an equaliser in the dying seconds of extra time, and then outscored them in the penalty shootout. Coach Guus Hiddink will miss Turkey’s Real Madrid midfielder Nuri Sahin, who is recovering from a knee injury, but Croatian coach Slaven Bilic’s squad is even worse hit with injuries. Bundesliga club Hamburg’s forward Mladen Petric, first-choice defender Ivan Strini, and English club Tottenham Hotspur’s influential midfielder Niko Kranjcar are all out of Croatia’s squad, while the shock defeat of 2008 is still fresh in the team’s mind.

“I have plenty of information about Turkey and we have our people there watching them," Bilic told AP on Tuesday in Prague. “We are scouting their players; we have the strength and character to win this tie and reach the finals. We will go into the match in Istanbul like it is the only match of the tie," added Bilic.

Defensive Montenegro will face a struggling Czech Republic, who made heavy weather of the qualifying campaign for Euro 2012 against rookie teams like Scotland, Liechtenstein and Lithuania, in the fourth play-off.