Reliance 's shares are hovering close to an all-time high, and its market capitalisation has risen by around Rs1.49 trillion since Reliance Jio's launch last September

It is understandable that investors of parent company, Reliance Industries Ltd, are a relieved lot.

But, as it turns out, Reliance’s investors are experiencing more than relief. They are in a state of irrational exuberance. The company’s shares are hovering close to an all-time high, and its market capitalisation has risen by around $23 billion (Rs1.49 trillion) since Jio’s launch last September. What’s more, the market capitalisation of Bharti Airtel and Idea Cellular Ltd has cumulatively risen around $3.4 billion since Jio’s launch last September.

In other words, despite all the mayhem Jio’s launch has caused, investors seem to be pricing in a utopian scenario, where large incumbents and Jio both gain from the latter’s disruptive pricing strategy.

While it’s true that tariffs have bottomed out, they are nowhere near optimal levels. They are at a discount of at least 50% to normal tariffs, going by Jio’s posturing on its rate card. And current tariffs imply the company will not even reach the halfway mark in terms of revenues required to break-even. Analysts at CLSA Research and Kotak Institutional Equities estimate Jio’s pre-tax break-even at Rs39,600 crore and Rs44,800 crore respectively, based on extrapolations on the company’s FY17 expenses.

A move towards full tariff can get the company close to a break-even, but this is assuming its subscriber base also grows to around 110 million, and that all of its subscribers are on the flagship plan.

But a moot question is if the 80 million or so active subscribers on Jio’s network (as of April) will all stay if monthly cost doubles from current levels to around Rs340 per month. The fact that Jio is taking gradual steps after offering services free for seven months suggests that there may be dropouts with every increase in tariff. 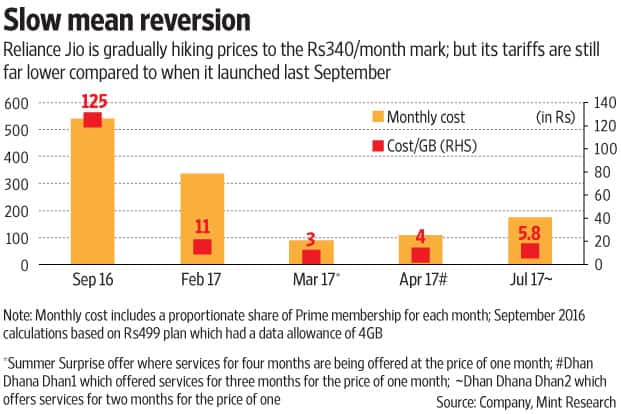 Clearly, there are a number of question marks still on how soon Jio can recoup its massive investment. And while there is some excitement about its highly anticipated low-priced 4G feature phone launch, it must be noted that customers in this segment generate considerably lower Arpu (average revenue per user). It remains to be seen by how much Jio can move the needle by entering this segment. Needless to say, a lot depends on how much it subsidises its new handsets, and whether it can entice low-value subscribers to switch by offering far lower tariffs as well.

If it succeeds in doing so, it will be another blow for incumbents, who are already reeling from the large hit on Arpus from smartphone users. Strangely, despite these risks, their stocks are doing fairly well.