Thanks for Visiting Mint
You seem to have an Ad Blocker on. Please turn it off in order to continue, or whitelist Mint
HOW TO TURN OFF AD BLOCKER
OR
REFRESH IF YOU ALREADY TURNED OFF THE AD BLOCKER
Home >Money >A V-shaped recovery, for now

A V-shaped recovery, for now

A V-shaped recovery, for now

The manufacturing Purchasing Managers’ Index (PMI), which has now estab-lished a decent record as a leading indicator, has been forecasting this recovery, and according to it, manu-facturing growth should be high in July as well.

There’s little doubt about the momentum behind the recovery. The problem is that the market is nervous the V could turn into a W as a drought looms ahead.

Nevertheless, the numbers have come in much stronger than anybody had expected, with strong performance by both capital goods and consumer durables.

HSBC economist Robert Prior-Wandesforde says the sharp rebound is the result of rebuilding inventories, evident from the rise in the “stocks of purchases" component of the PMI. While this is also the reason why such a high rate of growth may not be sustainable, such inventory build-ups are also a normal feature of any recovery. 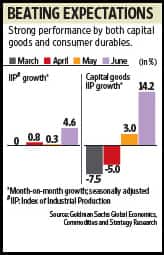 Both China and India have shown a sharp recovery in industrial production, but markets in both countries are edgy. The reasons for the nervousness, however, are very different.

In China, some of the huge amount of lending being done by the state-owned banks ended up in the stock market, driving prices higher. But with Chinese bank loans falling by 77% from the June figure, the flow of funds into the Chinese market will ebb, which is what is driving the Chinese market down.

In India, however, the concern is about the fallout of the drought. The 7.8% growth in the Index of Industrial Production shows that the stimulus is working.

But when will the impact of the drought start showing up in manufacturing demand? That should occur once the harvest is in, around September-October. A wary eye should also be kept on the two-wheeler sales numbers every month, as any rural distress should be reflected there.

The key question is: Will the strength of the recovery, coupled with a fiscal push by the government, be enough to offset the impact of the drought? Support from export growth is not expected to start kicking in till later this year, as the recovery in the West picks up steam.

A. Prasanna, an economist with ICICI Securities Ltd, says the government has no alternative but to support demand and liquidity.

The strength of the recovery in the non-agriculture sector will weigh down sentiment in the bond market, just as it led to a spectacular rebound in stocks on Wednesday. But Prasanna points out that over time, the bond market, too, will appreciate and the central bank will have no alternative but to keep liquidity abundant because of the drought.