Thanks for Visiting Mint
You seem to have an Ad Blocker on. Please turn it off in order to continue, or whitelist Mint
HOW TO TURN OFF AD BLOCKER
OR
REFRESH IF YOU ALREADY TURNED OFF THE AD BLOCKER
Home >Market >Mark-to-market >PMI: services offset manufacturing weakness, but confidence still fragile

The Business Expectations Index of the services PMI recorded its second lowest reading in the history of the survey in December, highlighting a weak degree of confidence

The services sector is insulated from the chill deflationary winds blowing from China, which could account for its bounce. The chart shows that at 51.6, the composite PMI isn’t exactly going great guns—it’s about the same level as it was last September and well below the pace at which it was growing in the beginning of 2015. That’s why Markit economist Pollyanna De Lima says “Overall, the PMI data continue to portray a struggling economy, weighed down by weak underlying demand. Indeed, cost inflation continues to surpass charge inflation, highlighting the intense competitive environment." 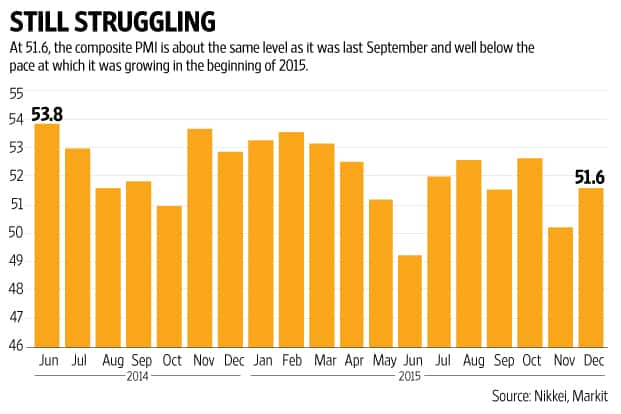 Nevertheless, since much of the fall in the manufacturing PMI was due to the floods in Chennai, the manufacturing gauge should do better in future and that should pull up the composite PMI. The chances of the bounce in the services sector being sustained are high, given the solid increase in new business. Survey respondents also said increased demand enabled them to pass on some of their rising costs. That ties in with other evidence of robust urban consumer demand, partly the result of falling inflation and partly the effect of lower interest rates.

However, the boost to consumption may be tempered this year, as the impetus provided by falling fuel prices wears off. That could be why, in spite of some improvement, the Business Expectations Index of the services PMI recorded its second lowest reading in the history of the survey in December, highlighting a weak degree of confidence.