The estimated 596,000 bars weigh 7,449 tonnesonly the US government and Indian households are thought to account for more

The London Bullion Market Association this week lifted the veil on how much gold is stored in vaults in the city, which instantly joined a list of the world’s biggest hoards.

The estimated 596,000 bars weigh 7,449 tonnes—only the US government and Indian households are thought to account for more.

Most London gold is stored in the Bank of England, with the rest in private vaults, including those operated by HSBC Holdings Plc and JPMorgan Chase and Co.Bloomberg

Raise rates? Central banks should be keeping it easy

For all the talk of higher interest rates and monetary policy being “normalized" nearly a decade after the global credit crisis, the case for central banks staying easy is building.

In emerging markets, real—or inflation-adjusted—interest rates are at a three-year peak and the highest relative to developed market rates since the crisis. In developed economies, wage growth remains stubbornly and somewhat puzzlingly weak. 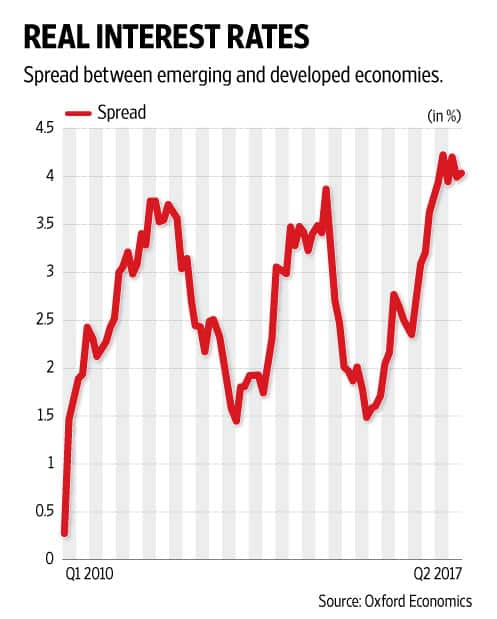 Bluntly put, inflation is low and there’s little sign of it rising. If anything, inflationary pressures are pointing to the downside.

This presents a headache for policymakers, who are keen to start dismantling post-crisis stimulus measures but wary of acting while price pressures remain weak.Reuters

Oil bulls aren’t out of the woods yet

Oil investors seem to buy the idea that recovery is finally underway after three years of gluts, but a price boom seems unlikely as the options market shows that at least until Opec’s supply deal expires, producers will pounce on any rallies.

The oil price has gained about 20% in the last two months to above $52 a barrel, doggedly posting higher highs and higher lows, which would suggest this rally is more robust than the recoveries seen in March and May this year.

“It has been a good rally since June but now crude oil has to prove that it can break its downtrend channel," Petromatrix analyst Olivier Jakob said.

Investors have been rattled by nagging doubt about the ability of the Organization of the Petroleum Exporting Countries and its partners to stick with a pledge to restrict output by 1.8 million barrels per day until March, especially given resurgent output from Libya and Nigeria, which are exempt.

A 10% rise in US production this year and the painfully slow decline in global oil inventories, which Opec says must return to their longer-term average before the output restriction can disappear, has fed trader and investor scepticism. Reuters