Reliance Jio’s results raise more questions than answers, and the true picture of its finances is yet to emerge

Mumbai: The highlight of Reliance Industries Ltd’s (RIL’s) September quarter results announcement were the financial details the company shared about its telecom subsidiary, Reliance Jio Infocomm Ltd. The company has been capitalizing expenses so far, and while its annual report gave a glimpse about expenses incurred last year, this is effectively the first time the company has issued a profit and loss statement for its telecom operations.

But the mystery surrounding Jio’s finances remain, with reported revenue and operating profit being far higher than what the Street had anticipated. The biggest surprise was the reported average revenue per user (Arpu) of Rs156.40 per month.

Jio’s current flagship plan entails an outgo of Rs399 for a period of 84 days, which results in an Arpu of around Rs122 net of tax. Tariffs were even lower in earlier months.

It appears that revenues on account of an earlier scheme—Summer Surprise—have been accounted for largely in the September quarter, even though payments were made in March and April. This is because of the manner in which the scheme was structured—those who signed up got the first three months’ services for free and then had to pay Rs303 to avail of services in the fourth month. So while effectively Arpu for this customer would be around Rs72, customers for whom the fourth month’s services happened to start in July, the revenues that were factored in would be Rs263 (net of tax). This would apply to a large portion of users at the time, since Summer Surprise applications picked up around end-March and peaked in early April.

“This quarter there is revenue coming from the previous quarter. We have said that it’s three months of free service and one month of charged service. So for those customers their entire revenue is coming in," said Anshuman Thakur, head of strategy and planning at Reliance Jio.

In effect, reported Arpu and revenue are bloated to an extent. It’s difficult to estimate what the adjusted Arpu will be currently, although the Rs122 figure mentioned above based on the Rs399 plan looks like a figure that’s close.

While there seem to be no immediate plans to raise tariffs, current tariff plans are at discounted levels and maybe raised at some point in the future. In a presentation to analysts, the firm said multi-SIM usage results in an understated Arpu. Adjusted for this, it estimates the Arpu per subscriber in the smartphone segment is Rs329 for the industry, compared with the estimated average revenue per SIM of Rs277. 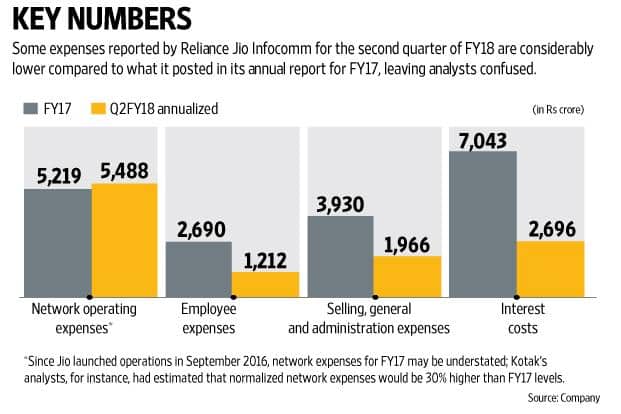 While the reported Q2 revenue is higher than warranted, expenses, too, look lower than estimates. The chart alongside compared expenses reported in Q2 with those in the FY17 annual report. Annualized staff expenses, selling, general and administrative expenses and finance costs are about half of what was reported for FY17. While network operating expenses seem to be on par, it must be noted that last year’s numbers may be understated as commercial operations began only in September 2016.

As such, the reported earnings before interest, taxes, depreciation and amortization (Ebitda) of Rs1,442 crore, or Ebitda margin of 23.5%, also look overstated, and something investors shouldn’t get unduly excited about—unless, of course, there’s good reason to believe FY17 expenses were overstated and current results reflect the true picture.

All told, Jio’s results raise more questions than answers, and the true picture of its finances is yet to emerge. To the company’s credit, its average subscriber base of over 130 million in the September quarter is far higher than estimates. That is clearly good reason for investors to be excited about the company’s prospects.

Meanwhile, RIL’s refining business reported a gross refining margin of $12 a barrel, a nine-year high, according to the company. However, many analysts were expecting the measure to be over $12 a barrel, thanks to the otherwise strong operating environment for refining firms. Despite the disappointment from the refining business, which contributed as much as 55% of RIL’s consolidated total segment Ebit, the buoyancy in Jio’s subscriber and profit numbers should please some investors.

Kalpana Pathak contributed to this story.

The writers do not hold any positions in the companies mentioned above.