There could be double trouble ahead for emerging market investors

If Treasury yields continue to rise and the premiums on developing world bonds go back to normal, DonaldTrump's first year in office could hurt emerging market debt investors

Singapore: Forget trade wars, protectionism and all the tough talk coming from the Twitter account of President Donald Trump. It hasn’t been this safe to own emerging market bonds for a couple of years. Or has it?

The average premium paid on debt included in the Bloomberg Barclays Emerging Market Hard Currency Index dropped to a two-year low on 18 January and has remained around that level. 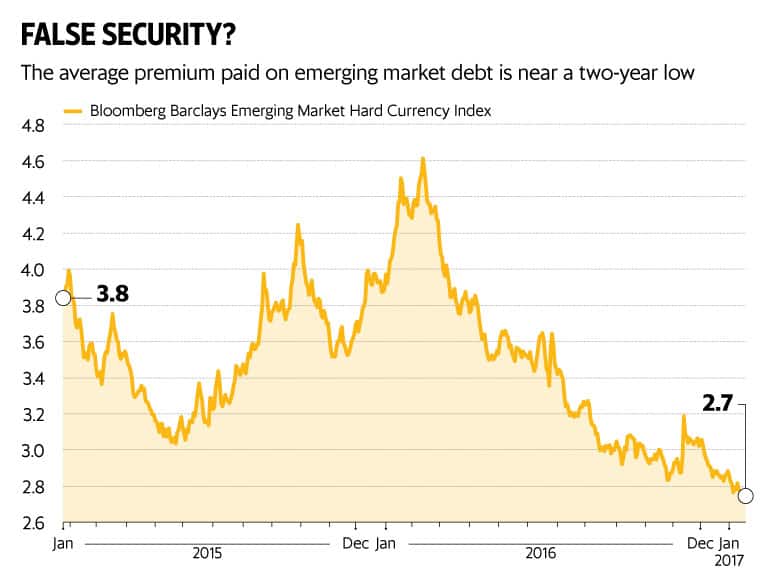 Similarly, the spread paid for insurance against default on emerging market bonds is hovering near two-year lows. The Markit EM CDS Index is at 238 basis points, a stone’s throw away from the two-year low of 226 points it touched on 22 September. The problem is that both moves may be explained by a technical issue that has little to do with the actual risk of defaults or losses. 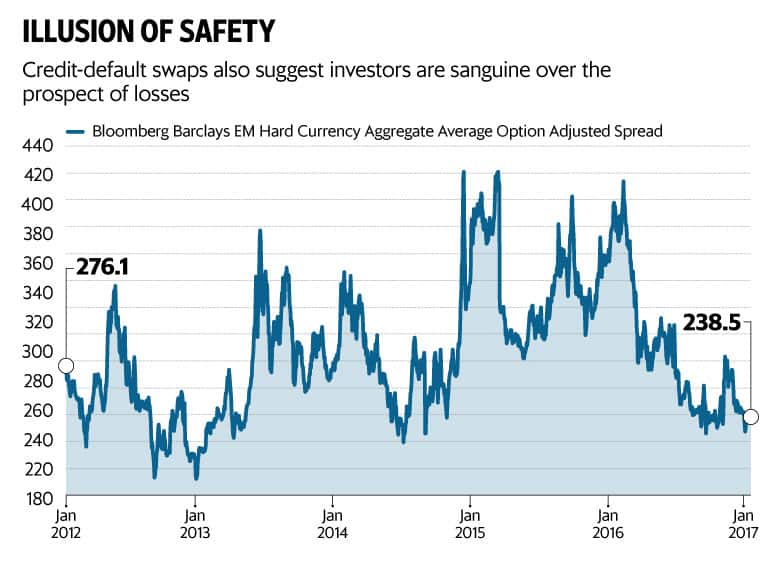 Consider that on 10 January, Moody’s Investor Services said it took 10 negative rating actions in 2016 on Asia-Pacific sovereigns and only one that was positive. Normally, weakening credit scores should translate into higher premiums on both bonds and CDS.

Treasury yields, however, have risen so fast since the election of Trump that less liquid emerging market bonds haven’t been able to follow. Premiums have been squeezed, therefore, not because investors perceived less risk in the asset class, but because they couldn’t sell fast enough.

Spreads on dollar bonds and CDS tend to move in tandem. As premiums dropped, so did the insurance contracts. Again, this is more of a technical phenomenon than a reflection of reduced risk. That means double trouble could be ahead for emerging market investors. The median forecast of analysts surveyed by Bloomberg has the yield on the benchmark 10-year US Treasury at 2.75% at the end of the year, 32 basis points higher than the current 2.43%.

Meanwhile, emerging market spreads averaged around 348 basis points over the past two years, 75 basis points higher than current levels. If Treasury yields continue to rise and the premiums on developing world bonds go back to normal, the first year of the Trump presidency could be painful for emerging market debt investors. Bloomberg