IndiGo profit crash-lands in Q1, management hopes for the best

Unless IndiGo bounces back with a strong performance in the second half of the year, it is likely to fall significantly short of Street estimates for this year's profits

InterGlobe Aviation Ltd’s shares have fallen 33% in the past three months. One of the triggers was the unexpected resignation of Aditya Ghosh, a key executive. Another was the sharp drop in profits in the March quarter. InterGlobe runs IndiGo, India’s largest domestic airline.

In the June quarter, things became far worse, with the company’s profits all but vanishing into thin air. IndiGo’s pre-tax profit fell 97% to ₹ 31.3 crore, or 0.5% of revenue. A year ago, pre-tax profit stood at nearly 20% of revenue. 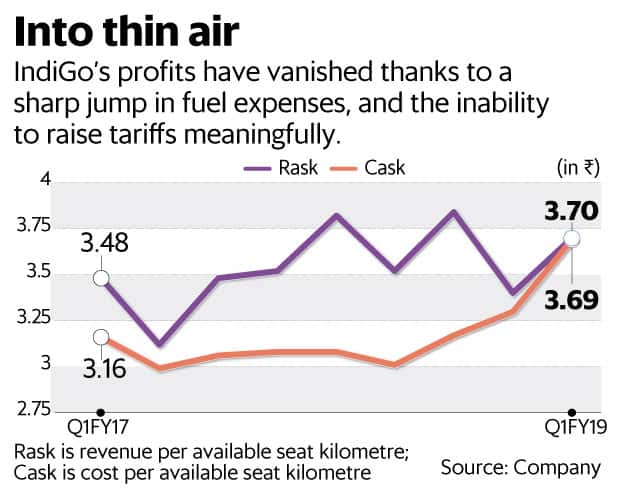 Most analysts tracking the company had anticipated a drop in profits, but none had envisaged a crash-landing. According to Bloomberg, analysts were expecting a 33% fall in pre-tax profit on an average. A loss of ₹ 246 crore on account of unfavourable foreign exchange movements and certain non-recurring maintenance costs were partly to blame, but that is little comfort in what is a disaster from an investor’s perspective.

The big worry is the pressure on yields at a time when fuel costs are rising sharply. Competition is especially high for tickets sold in the 0-15 day period from the date of travel. Traditionally, airlines subsidized other travellers by charging relatively high tariffs for bookings made closer to the travel date. But in recent quarters, airlines have been undercutting tariffs even in this lucrative segment.

And worse still, the IndiGo management had no answer for analysts who asked when yields would recover. While it said that current tariffs are unsustainable, it provided no visibility on when fares would improve.

According to an analyst with a domestic institutional brokerage firm, “It is difficult to fathom why airlines can’t raise airfares to recover the incremental cost of fuel. It’s not like they are dealing with a large influx of capacity which is resulting in lower fares."

Most analysts have been caught wrong-footed in estimating the company’s yields. And unless IndiGo bounces back with a strong performance in the second half of the year, it is likely to fall significantly short of Street estimates for this year’s profits.