I have been a victim of mis-selling myself

I have been a victim of mis-selling myself

India’s mutual fund (MF) industry is going through trying times. Learning to cope with the regulatory changes that threaten to make a dent in the industry’s earnings and at the same time having to battle competition from the insurance industry, the Association of Mutual Funds of India (Amfi), the MF industry’s trading body, has tough tasks ahead—of balancing the needs and demands of its members as well as ensuring fair practices for the retail investor. 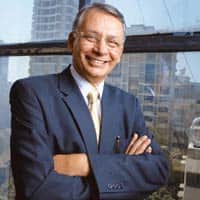 How come a banker such as you is suddenly heading Amfi?

I have been a banker all my life—for about the past 45 years. But it’s not that I did not have much idea about asset management companies (AMC) because I have—till I became Amfi’s CEO—been on the board of ICICI Prudential AMC. Banks use AMCs essentially to offer customers an alternative avenue of investments. It is also a part of their wealth management product. So, there is alignment between banks and the MF industry.

I was invited to take over since A.P. Kurian (present Amfi chairman) is due for retirement soon. There is a lot of work ahead for Amfi. There is scope of adding on to some of the best practices that are already followed in the MF industry. The Indian MF industry is well-regulated by the Securities and Exchange Board of India, or Sebi, but it is not as tightly regulated as the banks are. To that extent, I think Amfi has a role to play in terms of bringing about some kind of self regulation.

What are your immediate tasks as Amfi’s CEO?

Investor education is still very little. If you want to expand the reach of the MF industry, financial literacy is necessary. For that, some initiative from the industry or Amfi is needed. We have miles to go in this area.

Also, there is no adequate machinery to address the grievances of small investors, unlike in the banking system which has an ombudsman scheme. An Amfi committee is working on this already. You can expect some kind of regulator force for the creation of a structure similar to the ombudsman facility.

With Sebi getting more active, especially since the 2008 crisis that hit the MF industry hard, what is Amfi’s importance?

Ask yourself. Why would a regulator become active? There are a large number of small investors, who are gullible on account of lack of financial literacy—they do not understand complex products. So, when the industry does not do something on its own, Sebi steps in as it can’t be a silent spectator. With Sebi stepping in (this way), the time has come for the industry to wake up and do something on its own, much more than what it has been doing until now.

There are two ways to deal with this issue. Firstly, it’s not necessary that you have to be consistently in a confrontationist position with the regulator. There can be a collaborative effort with the regulators. We must go and meet the regulator to find out their areas of concerns. If these areas can be taken care of by the industry itself without any kind of mandate or directive from the regulator, it’s much better.

One of the first things I would like to do is to make our coordination with Sebi more active and together try and chart out a healthy course for the industry. K.N. Vaidyanathan (Sebi’s executive director who oversees the MF industry) would be very happy if we could take some of the load off him.

Honourable intentions, but one of Amfi’s biggest challenges is getting its members to implement its recommendations. When Amfi says something, some fund houses don’t listen. When Sebi says something, everybody falls in line. Like the no-objection certificate rule. Sebi had to intervene despite Amfi’s age-old directive.

To what extent our writ would run on our members is an issue that Amfi faces. Since this is a voluntary organization, members may feel it’s okay not to obey at times. But if Amfi comes out with guidelines, I think forceful implementation is very important. I am very sure that initially we may go through some kind of persuasive method, but later on if I think some kind of stick is to be used, we’ll see how best we can do that.

There are two ways to look at it. We (the MF industry) can simply run to the regulator and request it to regulate us. The other way is to make an attempt to see that our members (fund houses) fall in line in their own interest. Here, some kind of ingenuity would be required at Amfi’s level to make the members realize why they need to abide by self discipline. It’s a challenge. But it is worth trying out.

It is perceived that Amfi members are primarily bothered about their own interests and investors come second in their priority list.

It is the process of evolution for any association. When people come together to form an association, one of the first things they think is how best they can use this collective bargaining power to their advantage. And every business looks at profit maximization as their top priority. At that time, there is some kind of element of selfish interest in forming associations, be it Ficci (Federation of Indian Chambers of Commerce and Industry), Assocham (Associated Chambers of Commerce and Industry of India), CII (Confederation of Indian Industries) and so on.

But as organizations such as these and others mature, they start realizing that there is some kind of responsibility towards others. And you can’t simply look at profit maximization as the sole purpose of forming an organization. More so, in an industry which is dependent on small investors. In the financial services sector, either he is a small depositor or a small investor.

His interest has got to be uppermost in the minds of concerned associations. If they try to jettison that, the association has no right to live. But associations won’t mature overnight. First, everybody comes together with a selfish motive to protect their own interests, their own profitability and that is why many associations in their nascent stages do not come to any conclusion on any issue. I am sure Amfi, too, went through this stage. But now I find Amfi is progressing in that area, various committees are formed to make the life of the small investor easy.

Mis-selling is rampant despite Amfi laying down a code of conduct for funds and distributors. Is there a way out?

I have been a victim of mis-selling myself so I would know. When I took over Amfi, the first thought that came to my mind is how do we stop somebody from mis-selling or misguiding gullible investors. More and more fund houses are launching complex products that frankly even many agents would not understand properly. Not only do some of them mis-sell, they also misguide. Something needs to be done. I have no ready answer at this stage, but this is on top of my agenda.

Is Amfi keen on becoming a self-regulatory organization?

My first impression is that in India, something like self-regulation still doesn’t work. We are not given to self discipline. For example, in our personal life, we spit on the road, among other things. So, we still need a teacher’s stick and the regulators will continue to play a role. As far as Amfi is concerned, it is difficult to say at this stage, but looking at the system and environment as a whole, the concept of self-regulation is still far away.