OTHERS : Mumbai: Indian benchmark indices BSE Sensex and NSE’s Nifty 50 declined after the Reserve Bank of India kept its monetary policy unchanged as expected. RBI’s monetary policy committee (MPC) voted unanimously to keep the repo rate at 6.5%, but voted 5-1 in favour of maintaining the policy stance as “calibrated tightening”. Shares of metal companies suffered heavy losses today, with the Nifty Metal Index falling over 3%, as prices of industrial metals declined over trade war concerns. Auto, healthcare and banking stocks were also major contributors to the losses.In global markets, European and Asian stocks dropped on Wednesday following a rout on Wall Street, though declines were contained and U.S. equity futures rose after China pledged to start delivering on trade agreements reached with America. Oil fell as a rising supply glut and signs of an economic slowdown weighed on crude prices a day ahead of an OPEC meeting. Here are the highlights from the markets:

The BSE Sensex closed 249.90 points, or 0.69%, down at 35,884.41 and the Nifty 50 ended 84.55 points, or 0.74%, lower at 10,784.95. The BSE mid- and small-cap indices fell 1.2%. All the sectoral indices on BSE declined, with metal losing most at 3.8% followed by auto, basic materials healthcare and power, which fell over 2%.Hindustan Unilever, HDFC, HDFC Bank, Wipro, Reliance and HCL Tech were among the top gainers on the key indices, whereas Sun Pharma, Tata Steel, Vedanta, Hindalco, Tata Motors and Indiabulls Housing Finance were among the major losers. 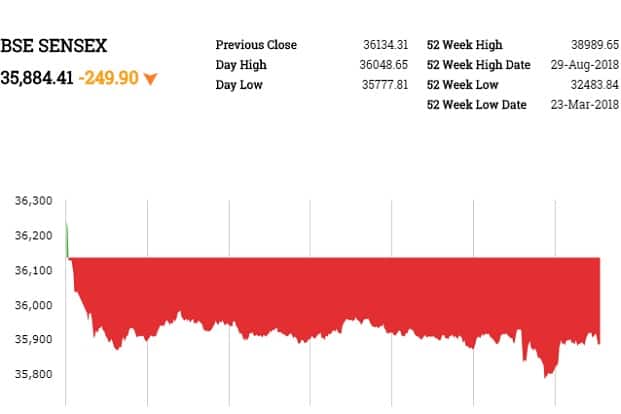 With a fall in inflation and global crude prices, most of the analysts had expected the RBI to keep its repo rate unchanged. https://t.co/aAnRdklIcF

Maruti Suzuki India shares traded 1.17% down at Rs 7634.25 per share. The car maker said it will hike prices across various car models next month to mitigate the impact of high commodity prices and foreign exchange rates, the automaker said on Wednesday. “It has become imperative for the company to pass on some impact of the...additional cost to customers through a price increase across various models in January 2019,” the company said in a regulatory filing. The price hike will vary for different models, the company said.

HDFC AMC and HDFC Trustee Company on Tuesday settled a case of alleged violation of mutual fund norms case with Securities and Exchange Board of India (Sebi) by paying Rs 3.78 crore towards settlement fee. The so-called consent mechanism allows the entities to settle violations by paying a penalty without admission or denial of guilt. HDFC AMC shares traded 0.23% down at Rs 1568.05 per share.The regulator had initiated adjudication proceedings against HDFC Asset Management Company and HDFC Trustee Company in April for alleged violations of several provisions of mutual fund regulations. Both firms submitted separate applications with Sebi to settle the case on payment of settlement charges. Read more

Sun Pharma shares down over 2%

Shares of Sun Pharmaceuticals Ltd traded 2.02% lower at Rs 433.85 per share. The stock rose briefly to hit a high of 445.45. Sun Pharma shares traded lower for the third day today after reports emerged that Sebi has reopened an insider trading probe against the company. The stock failed to recover despite a statement from Sun Pharma denying the media reports.

RBI monetary policy today: Key things to watch out for

Investors are watching how Urjit Patel will respond to the state's push for more say over the central bank's rolehttps://t.co/MfUDQoX3QD

Shares of metal companies traded lower today as prices of industrial metals declined on the London Stock Exchange as US-China trade tensions resurfaced, raising concerns over demand in the world’s top metals consumer China. The Nifty Metal Index was down 2.5% dragged by Jindal Steel, SAIL, Hindalco, Vedanta and JSW Steel, which fell 2.5% to 4.4%. Jet Airways shares rose as much as 2.75% to Rs 311.75 per share after the company said that it would bring on board a new investor in two-three months to help fund the cash-strapped airline. Top officials of Jet Airways, led by chief executive Vinay Dube, offered the assurance at a 26 November meeting with the pilots’ union, National Aviator’s Guild, reported Mint, citing two people aware of the matter, requesting anonymity. Shares of Kesoram Industries Ltd fell as much as 7.8% to Rs 89.60 per share after the company said it was demerging its tyre business. The separated business ‘Birla Tyres’ will remain listed. Jan. 1, 2019 has been fixed as appointment date for the business spin-off. Birla Tyres will issue 1:1 equity share to Kesoram Industries at nominal value of Rs 10 per share.

Rupee falls further against US dollar

The Indian rupee weakened marginally against the US dollar, tracking losses in its Asian peers and ahead of the key Reserve Bank of India’s policy decision today after 2.30pm. At 9.05am, the rupee was trading at 70.74 a dollar, down 0.31% from its Tuesday’s close of 70.51. The currency opened at 70.67 a dollar. The 10-year government bond yield stood at 7.558% from its previous close of 7.573%. So far this year, the rupee has declined 9.41%, while foreign investors have sold $4.87 billion and $7.79 billion in the equity and debt markets, respectively.

Oil prices fell 1% on Wednesday, weighed down by swelling U.S. inventories and a plunge in global stock markets as China’s government warned of increasing economic headwinds. International Brent crude oil futures were at $61.37 per barrel, down 71 cents, or 1.1% from their last close. U.S. West Texas Intermediate (WTI) crude futures were at $52.64 per barrel, down 61 cents, or 1.1%, from their last close.Gold prices were steady early Wednesday as the dollar edged up, while palladium dipped from record highs touched in the previous session but was in close proximity to the bullion. Spot gold was at $1,236.85 per ounce. In the previous session, prices touched a peak of $1,241.86, their highest since Oct. 26. U.S. gold futures were down 0.4% at $1,241.4 per ounce.Metals: Industrial metals on the London Metal Exchange fell on Wednesday as U.S.-China trade tensions resurfaced, raising concerns over economic growth and demand. Three-month LME copper fell 0.3% to $6,189 a tonne, while the most-active contract in Shanghai lost 1.4% to 49,250 yuan ($7,206.30) a tonne. London aluminium fell 0.2% to $1,971 a tonne, while nickel eased 0.1% and zinc was 0.4% lower. Reuters

Asian equities dropped in the wake of the biggest slide in stocks on Wall Street since the mid-October downdraft, though U.S. futures advanced after China officially echoed President Donald Trump’s optimism over bilateral trade talks. Losses eased as the trading session wore on for stocks across the region and declines from Sydney to Shanghai were less than the 3.2% tumble in the S&P 500 Index.The MSCI Asia Pacific Index fell 0.9% as of 11:42 a.m. Tokyo time. Japan’s Topix Index declined 0.3%. Australia’s S&P/ASX 200 Index lost 1.2%. Hong Kong’s Hang Seng dropped 1.5% and the Shanghai Composite fell 0.7%. Futures on the S&P 500 rose 0.4%. The S&P 500 fell 3.2%, while the Nasdaq 100 slumped 3.8% on Tuesday. Bloomberg