Titan Co. Ltd’s jewellery business, which accounts for a lion’s share of its revenue and profits, did well in the December quarter despite demonetization. That impressive run has continued in the March quarter—in fact, growth has been better this time around.

Sure, successful studded jewellery activation (of promotions) last quarter helped but the base was favourable considering that jewellery activation had started in December of financial year 2016. Further, mandatory permanent account number (PAN) card for purchases above Rs2 lakh and a strike related to the imposition of excise duty had cumulatively impacted walk-ins and sales in the March 2016 quarter. 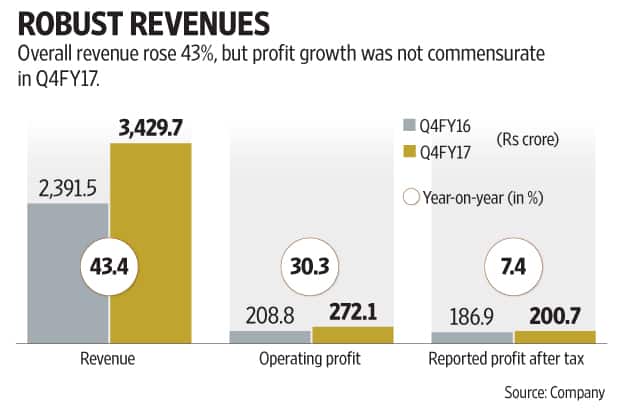 Titan’s watch business contributed 14% of revenue last quarter and increased 11%. The upshot: overall revenue rose 43%. However, profit growth was not commensurate. Net profit increased just 7.4% to Rs200 crore. That’s because, firstly, operating profit growth was at a relatively slower pace of 30%. Higher advertising costs, thanks to new product launches, is one culprit. Operating margin declined 80 basis points to 7.9%. One basis point is one-hundredth of a percentage point. Further, slower other income growth and a sharp increase in tax outgo weighed on net profit growth.

The Titan stock has gone up about 52% so far this calendar year. At Rs495 a share, Titan trades at 42 times and 36 times estimated earnings for fiscals 2018 and 2019, respectively. Valuations are rich and the sharp run-up in the stock price may cap further appreciation.

Nevertheless, the implementation of the goods and services tax, or GST, is expected to be positive for Titan, as market share gains are anticipated from the unorganized sector. Moreover, the firm indicated in its conference call that this fiscal year has started on a strong footing.

An increase in the share of wedding jewellery and network expansion are expected to boost the jewellery segment. The watch segment can be expected to benefit from new product launches. Emkay Global Financial Services Ltd expects a revenue compounded annual growth rate (CAGR) of 16.5% in FY17-19E, driven by a 17% CAGR in jewellery revenue. Needless to say, if Titan manages to keep the momentum in growth rates, then valuations can get some support. In the near term, investors would do well to keep a tab on GST rates.