Mumbai: Indian banks are likely to slow lending to infrastructure developers as they face an increasing mismatch between their deposit and loan portfolios.

“We may not see the same pace of expansion, in terms of credit disbursement to the infrastructure sector, in the next two years that we have seen in the past two years." 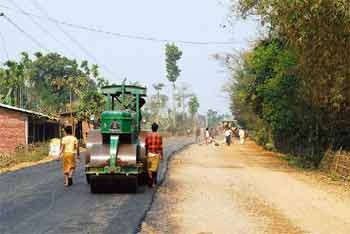 Officials of many state-run banks said they have either reached or fast running out of available headroom due to shortage of resources and sectoral exposure limits set by the Reserve Bank of India (RBI).

RBI rules say a bank can only lend up to 15% of its capital to a single borrower and 40% of capital funds in the case of a borrower group. This makes lending to infrastructure companies even more difficult for smaller banks.

“Maximum loan proposals are coming from this (infrastructure) sector. All are big-ticket proposals," said P.K. Anand, executive director of Punjab and Sind Bank. “Banks will have to see their loan book and see what their headroom available for lending."

T.M. Bhasin, chairman and managing director of Indian Bank, said his bank has reached 75% of its internal limit for the power sector while for other infrastructure segments, it has exhausted 60-70% of the limit. Of its limit of Rs15,000 crore for infrastructure, the bank has already lent about Rs10,500 crore.

Indian banks have lent Rs482,189 crore for infrastructure projects as on 19 November, according to rating agency CARE Ltd.

Shortage of funds to finance long-term projects could slacken the pace of economic growth as banks are expected to fund a significant portion of an estimated $1 trillion required in the next five years.

A gap in the maturity profile of loans and deposits has increased in the recent past due to slower deposit mobilization by banks.

Bank deposits have grown at 16.4% compared with the 17% target set by the central bank for the fiscal year ending 31 March. Credit is growing at a much faster rate of 23.6%, RBI data show.

Central bank governor D. Subbarao said on 25 January that a rapid credit growth without a similar increase in deposits was not sustainable.

“The Reserve Bank will constantly monitor the credit growth and, if necessary, will engage with banks which show an abnormal incremental credit-deposit ratio," Subbarao said in the third-quarter review of monetary policy.

The mismatch between loans and deposits have widened in recent years due to increased infrastructure lending and lower deposit collection, CARE data show.

Nearly half of the lending was to fund power projects and nearly 20% was given out in to telecommunications firms, the agency said.

Bigger banks, too, have started feeling the heat of a rising asset-liability mismatch. Bank of India has lent about 24% of its advances to infrastructure against its internal cap of 30%.

Bank of Baroda executive director R. K. Bakshi said the bank’s exposure to the power sector has reached its ceiling and the bank is “going cautious and selective on power projects."

While headroom is available for different industries in infrastructure, Bakshi said managing the asset-liability mismatch will be a challenge “the way it is building up."

Analysts say raising the foreign investment limit in the local corporate bond market and routing that money to develop country’s infrastructure sector could be a way out.

“One of the solutions to increase fund availability to the sector is to raise the foreign investment cap in corporate bond further and reserve the increment for investments only in the sector," said Soujanya Pantula, head of public sector bank ratings at CARE.

Bankers are also seeking permission to float long-term tax-free infrastructure bonds on the lines of firms such as Infrastructure Development Finance Co. Ltd and India Infrastructure Finance Co. Ltd (IIFCL). IFCL plans to do take out financing for banks worth Rs3,000 crore by March from over 10 banks, chairman and managing director S. K. Goel said. It has already approved proposals for Rs1,500 crore, he said.

“We are aware of the problem of asset-liability mismatch and feel that current (business) group exposure norms are high," Goel said. “This has to be addressed. Banks feel that they are reaching saturation point." Infrastructure firms, however, said there are no immediate concerns of bank funding drying up.

“There is no immediate concern as the banks will take time to implement if RBI issues any guidelines on the infrastructure lending," said Issac A. George, director and chief financial officer at GVK Power and Infrastructure Ltd said.