"storyDirectUrl"
OPEN APP
Home >Market >Mark-to-market >Infosys needed a clean break from its founders, but settles for a patch-up

Infosys needed a clean break from its founders, but settles for a patch-up

Nandan Nilekani as new chairman of Infosys doesn't solve the larger problem related to the interference of the founders in the board, say analysts

Infosys Ltd’s shares have risen more than 6% from the depths they reached after Vishal Sikka’s sudden resignation and the resulting deadlock between the company’s board and its founders. Investors’ nerves were calmed by reports that Nandan Nilekani, a co-founder, is likely to be back at the helm. A late evening press release confirmed these reports, with Nilekani being appointed as non-executive chairman.

This is a strangely myopic view. However accomplished Nilekani might be, to put a co-founder at the helm is a clear sign that N.R.Narayana Murthy has won the very battle investors hoped he would back away from. The string of resignations from the Infosys board gives further rise to concerns that the founders are now calling the shots.

For perspective, a portfolio manager at Oppenheimer Funds had written to the Infosys board earlier this year stating that it should “contain inappropriate interventions by non-executive founders".

He also asked the founders to “come to grips with the reality that (Infosys) is a public company".

While no one else spoke up like Oppenheimer, this was the general sentiment among investors, according to a number of analysts who regularly speak with investors.

Those celebrating Nilekani’s return—including a bunch of domestic institutional investors who made a clarion call for it—are reinforcing the blinkered view that Infosys will become great again if only its founders have a say in how the company is run. They are conveniently forgetting that Infosys has struggled with leadership for nearly a decade now, and that the saviours they are looking to now had failed the company when it came to succession planning.

Infosys had given up the mantle of technology bellwether years before Sikka appeared on the scene—during the tenure of S. Gopalakrishnan, a co-founder, to be precise. When S.D. Shibulal, another co-founder became CEO, things got far worse, forcing Murthy to take back the reins for a brief period. 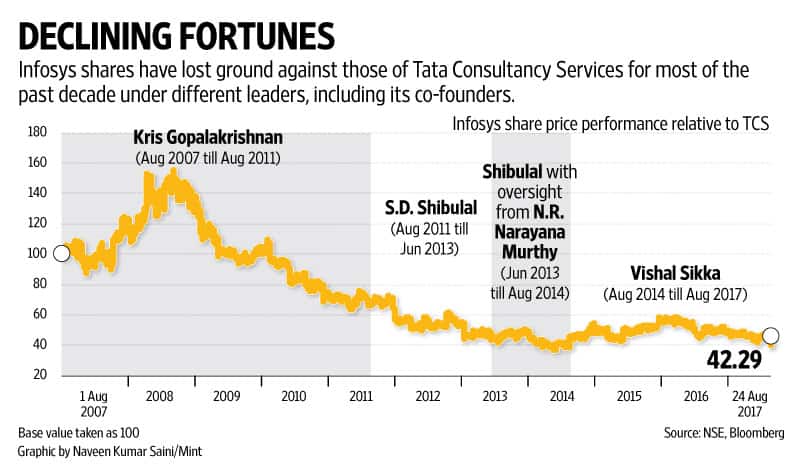 If anything, Sikka brought some stability at the top. As this column pointed out earlier this week, Infosys shares had completely wiped out the valuation discount vis-à-vis Tata Consultancy Services Ltd’s shares within two years of his joining the company.

It’s true that Nilekani’s return will steady the Infosys ship, and give some confidence to customers and other stakeholders—after all, the current board has lost the confidence of nearly everyone. But having said that, it is clearly no lasting solution.

According to analysts at two multinational brokerage firms, Nilekani’s return doesn’t solve the larger problem related to the interference of the founders in the management of the company.

If investors are coming around to a view that Infosys can now only be run by the founders and their cohorts, they must realize that it will seriously cripple the company in attracting top talent.

On the contrary, they should push for clear terms of engagement between the company’s board and its founders. Unless there is clarity on that front, Infosys will remain in a state of flux.

Sikka’s exit had left one huge imponderable: Which leader worth his salt will want to take the reins at Infosys, knowing what Murthy and his followers are capable of from behind the scenes? With the founders visibly leading from the front, there’s no point even asking that question—unless Nilekani, by some miracle, can prove that the board and management he constitutes is fiercely independent of the founders.