What the new green norms for thermal power plants imply

According to industry estimates, firms need to spend anywhere between Rs0.5 crore and Rs1.5 crore per megawatt to meet the new emission norms

For a change, India is at the leading edge of (proposed) pollution norms. Emission rules for certain sulphur and nitrogen compounds from thermal power plants are stricter than the European Union and US standards. These norms are not only for units under construction, but have been imposed (with varying degrees of relaxation) on existing operational thermal plants as well which have to comply within two years.

There are two implications from these decisions which have power producers crying foul. One, there would be a cost to compliance—which would ultimately lead to higher tariffs and be borne by consumers. Two, these new norms may provide a much-needed boost for the capital goods industry, but are they in any shape to take advantage?

According to estimates from the Association of Power Producers, an industry lobby, to meet these new emission norms, companies need to spend anywhere between ₹ 0.5 crore and ₹ 1.5 crore per megawatt (MW). As the table shows, there is 132 gigawatt (GW) of operational thermal plants built between January 2004 and December 2016, and another 54GW that will be commissioned after January 2017. 1GW equals 1,000MW. A back-of-the-envelope calculation shows that at the higher end of these estimates, the total cost of revamp and retrofit would amount close to ₹ 2.8 trillion. 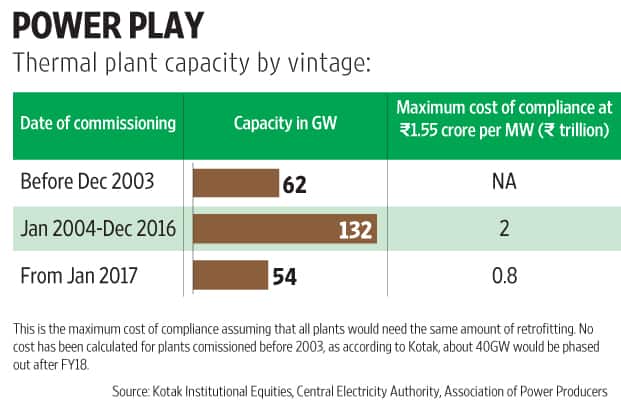 However, these plants are of varying vintage. “Given the per MW estimates are imprecise and some plants may have lesser requirements, we think that the total opportunity size could range between ₹ 1-1.7 trillion," analysts from Kotak Institutional Equities estimate. The cost of implementation would translate into an increase in tariffs by 50 paise to ₹ 1.25 per unit, according to Association of Power Producers.

Secondly, it might be some time before capital goods makers see order inflows. That’s because even though thermal power plants have to comply with these norms by December 2018, it is likely that they will get an extension simply because system installations would typically require a time frame of more than 30-48 months. Thus, these would happen over a period of time.

This revamp and retrofit opportunity is in addition to another 40GW of very old plants which would be phased out completely, as per Kotak estimates, and need to be replaced. But a capacity utilization of 61% and the narrowing gap between thermal and renewable tariffs might act as a dampener.

Kotak estimates that the pace of project awards will likely pick up only from fiscal year 2018 onwards. It might be too early for capital goods companies to cheer.