Which commodities were hit the most by CTT

Turnover on MCX falls 38.9% on 1 July compared with the daily average in the first six months of the year

The newly introduced commodity transaction tax (CTT) had its expected impact on exchange-traded commodity volumes on Monday. Turnover on the country’s largest commodity exchange, Multi Commodity Exchange of India Ltd, fell 38.9% to ₹ 34,685 crore on 1 July, compared with a daily average of ₹ 56,779 crore in the first six months of the year. (Business done on Saturdays has been excluded as that’s a fraction of the turnover on other days and skew the picture.)

Again, not surprisingly, natural gas and silver were among the contracts that were hit the most. Both are among the most volatile contracts in terms of price movements and attract heavy speculative interest. Natural gas contracts, which account for about 6% of the exchange’s turnover, witnessed a 65% drop in volume. Silver, which is the second largest traded commodity on the exchange with a turnover share of nearly 24%, witnessed a 53% drop in volume. 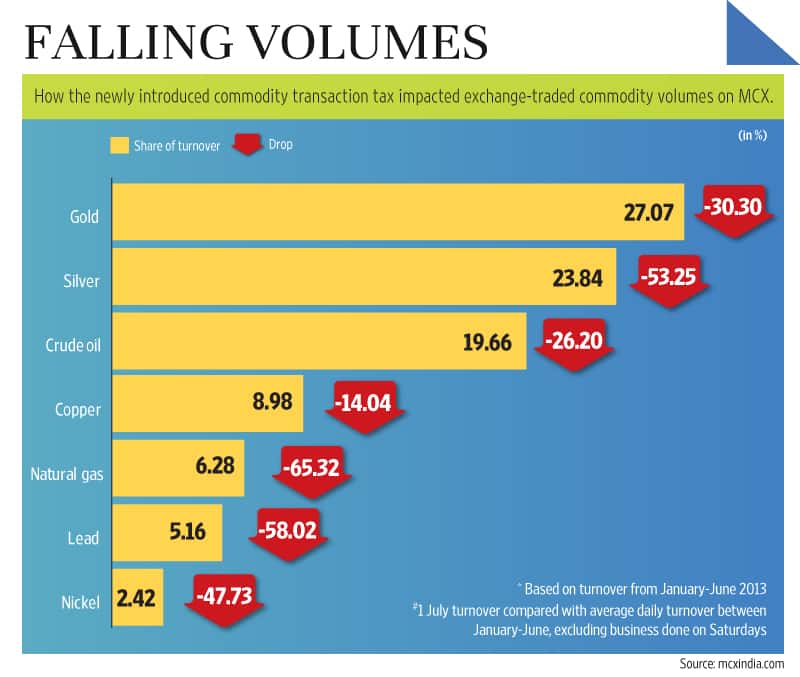 Gold, the largest traded commodity, saw a much lower 30% drop in volume and crude oil volume fell 26%. Copper volume fell by only 14%.

It’s heartening to note that while volumes have fallen, they are still at fairly healthy levels, with exchange-wide turnover at nearly ₹ 35,000 crore. But as one commodities trader puts it, it’s still early to assess the impact of CTT. The real test will be when there is low volatility and trading interest falls to low levels.