While RBI's game plan may help the corporate bond market retain its recent cost advantage, it may not help reduce reliance on the banking sector in a big way

The Reserve Bank of India (RBI) appears to have landed an ace with its decision to kill the liquidity deficit that has persisted in the system for years now. There are some lingering concerns over how deftly RBI will be able to implement the strategy, which requires it to infuse cash through a mix of foreign exchange operations and bond buys. However, the broad consensus is that RBI’s move is a smart one.

The new strategy, as the RBI governor articulated after the monetary policy announcement, has been brought in to ensure that the broader economy benefits from the policy rate cuts announced. As is widely known, banks have failed to pass on the full extent of previous rate cuts and have blamed tight liquidity for this. RBI has now addressed those concerns.

So will bank lending rates start to fall now?

Most analysts say they will. But there is still a debate on how soon rates will fall and how far they will drop. Bankers have been cagey. They have all welcomed RBI’s move, but none have gone on record to say that rates will come down any quicker now. They are waiting to see liquidity conditions actually improve and are also assessing how far they can drop their deposit rates without hurting deposit growth (which has fallen to a 63-year low) further. That is not to say that rates won’t fall. They probably will, but eventually rather than immediately.

The quantum of the fall may also not be as large as some expect. Citi Research, for instance, in a note on 6 April, said the marginal cost of funds-based lending rate (MCLR) will fall 10-25 basis points from here. One basis point is one-hundredth of a percentage point.

In the interim, it’s advantage bond markets. Short-term borrowing rates in the bond market have already started to fall, which means the gap between the cost of market borrowings and bank borrowings continues to be wide.

According to Bloomberg data, the going rate on three-month commercial paper borrowings has fallen back below 8% and is currently at about 7.75%. The cost of one-year borrowings by AAA-rated companies is also below 8%. At these levels, the bond market offers a substantial cost advantage. The comparable MCLR rates in the banking sector for three-month borrowings are all above 9%. The one-year MCLR is at 9.2% and above.

If this rate differential persists—and it looks like it might—then companies may prefer to shift a larger part of their short-term borrowings towards the bond market. This is a shift that has already started and an acceleration of the trend will be positive for the economy in the long term, even though it may hurt banks in the short term.

In an Ambit Capital report, Who’s moving my cheese?, released in January, its analysts highlighted that banks have been losing market share. Indian banks have lost about 500 basis points in market share to the bond market over the past two years, said the report. Data collected by analysts, Pankaj Agarwal, Ravi Singh and Rahil Shah, had shown that the share of corporate bonds in the corporate credit segment has risen to about 34% as of September 2015 from 29% in September 2013. They added that in the case of larger companies, there has been a 10 percentage point shift with bigger firms now sourcing 64% of their debt requirements from non-bank sources in fiscal 2015 as compared to 54% in fiscal 2012. The reason for this has been largely cost driven as bond yields have fallen quicker than bank lending rates. As such, if the cost differential between markets and banks persists, the shift may become more pronounced. 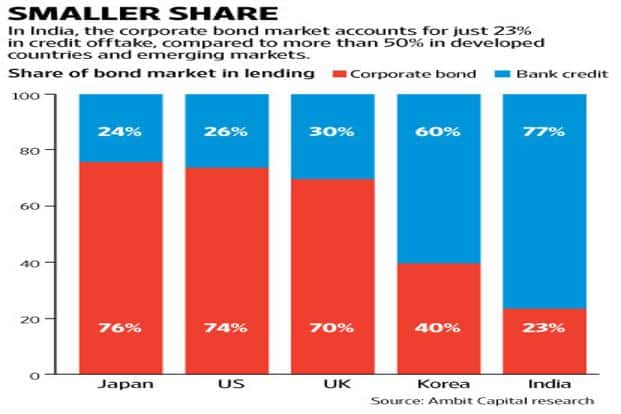 Why does it matter where companies borrow from? It matters for two reasons. First, it puts competitive pressure on banks to bring down rates. Second, it forces greater credit discipline among corporate borrowers.

It’s the latter that is most essential in the Indian context right now. Companies that have issued traded debt securities have been under greater pressure to control run-away debt and have moved quickly to sell assets to prevent a spike in the yield on their debt, which in turn impacts new borrowings costs. If a larger proportion of Indian companies had been borrowing from the corporate bond market, they would have been penalised for an increase in debt at every step. This may have prevented the build-up of stressed corporate assets that we see in the system now.

The caveat here is that the corporate bond market remains relatively illiquid and also inexperienced in handling a wide range of corporate debt. Most of the issuers are highly rated companies that have been regular issuers. The pool of issuers had started to widen as the concept of credit opportunity funds picked up over the past couple of years. But accidents such as the default on the Amtek Auto Ltd bonds came as a reality check and sent investors running back towards safer credit.

So, while RBI’s game plan may help the corporate bond market retain its recent cost advantage, it may not help reduce reliance on the banking sector in a big way. In that regard, India continues to lag far behind markets like Japan, the US and South Korea.