Risks to Bharat Heavy Electricals Ltd’s (Bhel) earnings are only increasing. Earlier concerns about falling order inflows at the country’s largest power equipment maker have now given way to concerns on its existing orders.

The recent controversy on coal fields could jeopardize its revenue and earnings growth, which is already on the decline. A section of analysts estimate that nearly one-fifth of its current order book of ₹ 1.39 lakh crore is linked to projects that may directly or indirectly be impacted by the controversy.

A report by JPMorgan Chase and Co. says that Bhel has a 42% market share in the 12th Five-Year Plan’s coal-based projects, in terms of projects outlined by the Planning Commission for execution in the five years ending March 2017. Further, mere orders seem inconsequential given the current state of the power sector. Analysts estimate that between fiscal 2007 and 2012, about 135,000 megawatts (MW) worth of orders were placed, but only 53,000 MW were commissioned. With a huge exposure to the power sector, given its paucity of gas and coal linkages, analysts say existing projects are likely to be delayed or even cancelled. 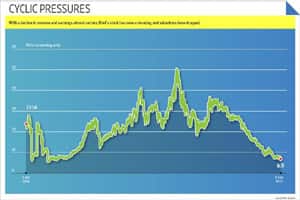 Besides, rising raw material and work-in-progress inventory levels, as reflected in the June quarter, are not expected to ease in the near term. This will also impact cash balances.

All these reasons certainly suggest cyclical pressures for Bhel, which will see earnings momentum drop drastically from a compounded annual growth rate of around 20% between fiscal 2007 and 2012 to a mere 5% between 2012 and 2015.

At the current market price of ₹ 202.5, Bhel’s stock may look inexpensive, trading at about nine times its one-year estimated earnings. Going even by historic data for little over a decade, the stock trades at a mere one-third its past average price to earnings multiple (PE) and at around one-fifth the highest PE scaled during the period. But this is no reason for investors to be positive on the stock, as the increasing risk to earnings is now threatening valuations.