Why IndiGo is the Reliance Jio of aviation

In the last one month, budget airline IndiGo (InterGlobe Aviation Ltd) announced two discount sales applicable on travel up to 15 April. The deals seemed attractive, with flight ticket prices starting at ₹ 899, and one million seats on offer for each sale event. The announcements came at a time when airlines operating in India approached the government to help them get unsecured credit from oil companies and airports. More importantly, Jet Airways (India) Ltd, the country’s oldest private airline, is struggling to keep flying, thanks to its high debt, bloated cost structure and cash burn at current yields. 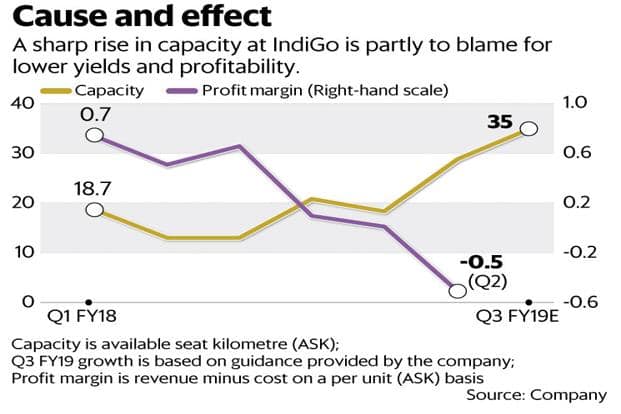 In this backdrop, it’s hardly surprising there is chatter that IndiGo is going for the kill when airlines are at their weakest. In the telecom sector, quite a few firms folded up after Reliance Jio Infocomm Ltd entered the market in 2016 with huge investments and cut-throat pricing. Is IndiGo having a similar effect on aviation?

The company, however, is quick to dismiss any such notion. The discounts and offers on flight ticket prices, it has pointed out to analysts, are offered periodically to attract customers to its portal. Besides, two million seats amount to only 5-6% of estimated capacity for the next six months and, even within this, only a fraction gets sold at prices as low as ₹ 899.

IndiGo has also told analysts that competitors are responsible for driving down yields. “You must understand that we are not leading the charge in terms of low fares. What you are seeing today in the marketplace (is that) there are players in the industry who are really hurting. And for them to raise short-term cash, they have to do lower fares. And, we as a company, have no choice but to match them," Rahul Bhatia, co-founder and interim chief executive officer of IndiGo, said in a post-earnings conference call with analysts last month.

But as Santosh Hiredesai, an analyst at SBICAP Securities Ltd, says: “While it’s difficult to figure out which airline first lowers fares, it’s fair to say that the airline that is adding the most capacity is most responsible for the pressure on yields."

IndiGo’s capacity, measured in available seat kilometre (ASK), has increased 23.5% in the first six months of the fiscal year, and its guidance for the year ending March 2019 suggests capacity will grow by 35% in the second half.

Shannon Attari, an aviation restructuring expert and partner at Attari Capital, says: “New capacity on new routes typically entails lower fares to stimulate demand. While this explains part of the pressure on yields, it’s also clear that airlines, including IndiGo, are pricing aggressively on select routes to gain market share. Though the capacity addition may have been planned years ago, the fact remains that high growth in supply is causing trouble in the near-term."

IndiGo’s version is that its focus is on the long term. “There may be somewhat of a bubble in our capacity during the next two quarters…but we continue to believe we are on the right strategy to build a long-term, viable, positive network for the company," the company said during the analysts’ call.

Broadly speaking, this isn’t very different from Reliance Jio’s strategy, which is adding capacity at a frenetic pace with a view on the long term. But the similarity pretty much ends there. The difference between Reliance Jio’s revenues, and total operating and capital expenses was about ₹ 26,500 crore in the first half of this year. In IndiGo’s case, cash burn in the first half is likely to be around ₹ 2,500 crore at most, even after assuming that its capex in H1 FY19 was almost double of what was incurred in FY18.

Besides, this was a seasonally weak period, and things will improve in the second half of the year, operationally. IndiGo also has cash worth ₹ 13,200 crore on its books, which means that the cash burn isn’t really stretching it in terms of leverage.

But given the fragile state of some Indian airlines, such as Jet Airways, even the willingness to burn cash only over the short term can cause much long-term damage. Therefore, it seems fair to say that IndiGo is having a similar effect on aviation that Reliance Jio had on the telecom sector, without having to spend much.