What to do when you don’t have an RWA

Aura is a residential project by Mahindra Lifespaces Developers Ltd on Dwarka Expressway, which falls roughly between Gurgaon and Dwarka (on periphery of New Delhi). According to the developer, the project has a total of 799 units. Phases 1 and 2 have been handed over, possession of phases 3 and 4 are on, and occupation certificate of phase 5 is expected in a couple of months. Over 450 owners have taken possession of their houses. But they do not have a residents’ welfare association (RWA). This, say many residents and house owners, is preventing them from taking up issues with the developer in a cohesive manner.

They say the super built-up area was increased by 4.2% and maintenance charges are high, even though facilities such as club house and swimming pool are not operational. “The maintenance charges are high, and they are not providing break-up of cost or access to books of accounts," said apartment owner Dinesh Kapoor. At present, maintenance charge is 3.21 per sq. ft, besides other charges such as 200 for parking even if the owner has bought a parking spot. “We don’t have utility connection yet. We get water from tankers and electricity from generators. Electricity charges are 7.50 per unit, plus a fixed charge of 577, irrespective of consumption," said Rajesh Yadav, another house owner. 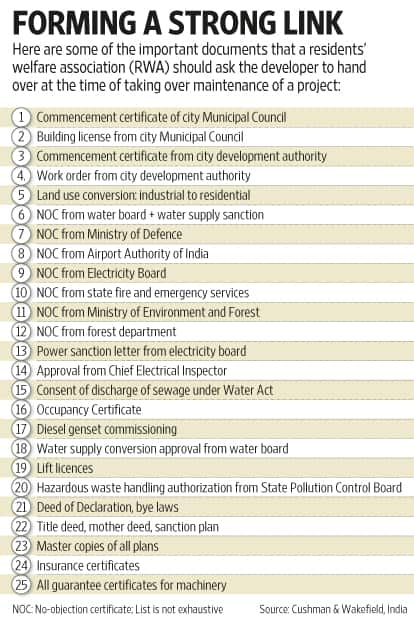 There is customer service facility but owners are not satisfied with it. “The Customer Relationship Management team does not pay heed to our requests. It works as a shield between the developer’s higher management and buyers," said Sameer Sharma, an apartment owner.

When Mint contacted Mahindra Lifespaces, Anita Arjundas, managing director and chief executive officer of the company, said, “During the process of possession, the developer facilitates the management of common areas by managing the site till the RWA is formed. This allows apartment owners to settle down before taking charge of running the project. There is a Common Area Maintenance charge taken from residents to run the development during this period." But owners claim the developer is purposely delaying RWA formation. “All apartment owners were asked to sign blank RWA-related papers at time of possession. If someone opposed, possession wasn’t given," said Anurag Dixit, a house owner.

Arjundas, however, says this was done for convenience. “To ensure ease of process during formation of RWA, home owners have signed a document agreeing to be inducted into association, at the time of taking possession. This allows for ease of logistics to ensure that home owners anywhere in India or the world can easily become part of RWA," said Arjundas. “We have already indicated to home owners that the RWA will be formed within the next 6 months," she added. Some home owners say that while this has been conveyed to them verbally, there has been no formal communication.

Usually, once the construction of a residential project is complete and a reasonable number of owners occupy their apartment, the next step is to hand over project maintenance to residents by initiating the formation of an RWA. This is an association of house owners in a particular society. Its responsibilities include day-to-day maintenance of the complex, including services like security, housekeeping, upkeep of amenities, collecting maintenance charges and other things within the society complex. If the developer does not initiate the formation of RWA, residents can do so on their own.

Often, developers do not allow RWAs to be formed to be able to retain control over maintenance and other charges.

Ideally, formation of RWA should be initiated by the developer. “Builders have to hand over the building to residents within a few months of receipt of occupation certificate," said Nellie Samuel, joint chief executive property, Knight Frank Property Services Pvt. Ltd. If that doesn’t happen, or if apartment owners are not satisfied with the maintenance services provided, they can take over the management.

“Usually, after an ad hoc one-year’s maintenance by the developer, the residents can come together and form an RWA," said Sajit Sankar, managing director, integrated facilities management and asset services, Cushman & Wakefield India.

How to form an RWA?

Either the builder or the residents can mutually call for an annual general body meeting of residents to form the RWA and an ad hoc committee. “To form an RWA under the Societies Registration Act, seven or more persons have to give their names to the memorandum of association," said Aradhana Bhansali, partner, Rajani Associates, a Mumbai-based law firm. If many residents are interested in becoming a part of the management committee, then usually elections have to be conducted.

Besides interacting with the developer, the committee also makes rules based on suggestions by residents and according to laws. These rules are known as bye-laws and are applicable to all members of the society. “Bye-laws are contracts entered into by and between the members and they bind the society and its members," said Samuel.

The laws vary across states. “Maharashtra has been a pioneer in apartment laws in India. The state government has society bye-laws and every housing complex has to follow the norms as embodied by the bye-laws," said Samuel. “In Karnataka, three types of apartment communities can be formed. A promoter can float a company or a cooperative society under Karnataka Apartment Ownership Act (KAOA). Alternatively, a third option is for the builder to form an association of owners under KAOA. Similar laws are there in Delhi and NCR wherein RWA guidelines are formed to manage housing complexes."

Once the ad hoc committee or a management committee is in place, the next step is to verify whether documents, books of accounts and facilities are as promised. “The committee usually does not take over the society if it finds any discrepancy," said Samuel. If there is a discrepancy but the developer refuses to take responsibility for it, “residents can file a case against the builder," said Samuel.

Among the important documents that the committee needs to see are occupancy certificate, property title, sinking fund details, books of account, deposits received for different facilities such as club, gym, spa and others. “Since forming an RWA is not a requirement under law, it is not necessary to register it, unless the RWA intends to collect funds from its members and others for the purpose of implementing its objectives," said Bhansali. Registration gives the association a legal standing. “Once registered, it enjoys certain legal benefits such as legal status separate from its members. It can acquire and hold property; and it can sue and be sued," said Bhansali.

The RWA can either manage affairs on its own or hire a maintenance agency (which will cost extra). The average cost of professional residential project management varies across agencies and the type and location of the project. “5.5 per sq. ft for 1,000 flats built on 15 acres is commonly accepted," said Sankar. There are many Indian as well as international property advisories that also provide management services. They can be contracted for all management services or some of them. Even if getting an external party to manage things, members should take a keen interest in the way it works, especially regarding books of accounts.

The cost of running a housing complex is a function of available facilities, demand for services and the number of units in the complex. “Maintenance charges are usually worked out to include all expenses required to operate and maintain the society," said Charu Thapar, managing director–project and asset management, JLL India. All expenses incurred are clubbed and a per sq. ft cost is determined. House owners may be charged based on their unit’s size or at a uniform rate.

If a developer is not initiating the formation of an RWA, residents can get together and form one on their own. This will help speed up resolution of some if not all problems in the society. But an RWA’s influence is not all encompassing, and short comings from the developer’s side may not be addressed.

The real estate bill, yet to be passed, talks about many issues faced by home buyers, including maintenance and RWA formation. For instance, it states that the developer is responsible for providing and maintaining essential services, as specified in the service level agreements, on reasonable charges, till the residents’ association can take over. It also says that the developer has to take steps for the formation of an association of the allottees.