Patanjali's interest was to use the Ruchi Soya acquisition to leapfrog to the No.2 position in the packaged edible oils business. If Adani Wilmar succeeds, it gains size and a competitive advantage

A fast-growing market for packaged edible oil is seeing two companies battle it out to acquire debt-laden edible oils and foods company Ruchi Soya Industries Ltd. Lenders will take a lower haircut than expected, adding to cases where the insolvency process has extracted value. Adani Wilmar Ltd is set to acquire Ruchi Soya, paying a handsome sum for a business that will add to its market share for sure, but also keep Patanjali Ayurved Ltd from snapping at its heels.

Adani Wilmar’s bid has been accepted but Patanjali Ayurved has appealed this decision in the bankruptcy court, according to news reports. How litigation affects the outcome remains to be seen. 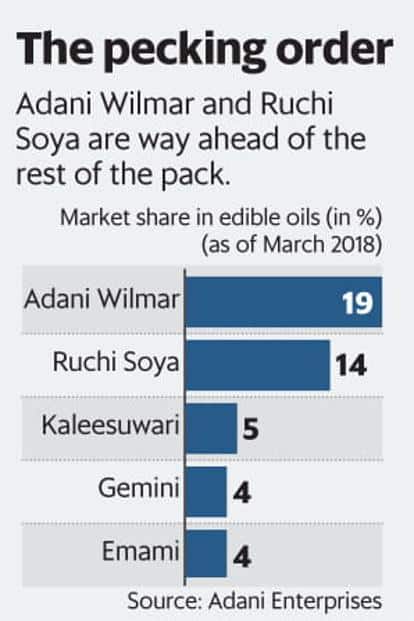 Adani Wilmar is believed to have offered lenders ₹ 6,000 crore against the total amount of ₹ 9,106 crore owed to financial creditors as of 31 July. The amount offered is a significant jump from the earlier rounds. Lenders will be happy as they will recover two-thirds of their outstanding amount.

While Ruchi Soya’s shares rose by 4.9% on news of this bid, it seems premature. Remember that lenders have still taken a haircut. Then, there are operational creditors. Once the details of the resolution plan are made available, shareholders will have some idea where they stand.

Why is Ruchi Soya an attractive target? The growing market for branded packaged edible oils is the main reason. The packaged segment has a 40% share of total consumption, according to a June Rabobank report. It calls out a significant shift from loose oils, and packaged oils are growing at double the rate of net consumption. Rabobank has predicted that packaged edible oil sales will increase by 6-8% annually over the next five years, with soy oil, sunflower oil and blended oils leading growth.

Adani Wilmar already has a significant share in the packaged oils market, with a market share of 19% as of 31 March, according to a company presentation. Add Ruchi Soya’s brands and 14% market share, and Adani Wilmar will have a third of the market. That will give it a strong position from where it can defend its position well. But it also has to make Ruchi Soya’s operations more profitable.

Packaged edible oils are only part of their business, with foods and trading also contributing to revenue. A combined operation can yield significant benefits, right from procurement of raw materials to distribution, with significant scale benefits.

Patanjali’s interest was to use this acquisition to leapfrog to the number two position in the packaged edible oils business. If Adani Wilmar succeeds, it gains size and a competitive advantage. The acquisition price and terms of the deal and relatively low profitability of Ruchi Soya may be a drag on its performance initially. It may have calculated that’s better than playing a bruising price war with an aggressive competitor.