OTHERS : Mumbai: Indian shares advanced over 1% today, recovering from sharp losses in the previous session, after US Federal Reserve signalled a pause in rate hikes and crude oil prices fell on no Opec supply cuts. A rebound in global stocks also supported the local markets. The Sensex surged 361 points to close at 35,673.25, and the Nifty 50 closed 92.55 points up at 10,693.70 led by finance and auto stocks. Kotak Bank, Reliance and Infosys are top contributors to the Sensex rally. Underperfomring the benchmark Sensex, the BSE MidCap edged up 0.23%, while the SmallCap index was down 0.27%. Among the sectoral indices on BSE, bankex and finance rose most at over 1% followed by FMCG, capital goods and auto. On the other hand, utilities, telecom, metal, oil and gas, power and healthcare declined.Kotak Bank shares rose 8.5% over reports that Warren Buffett’s Berkshire Hathaway is in talks to buy a 10% stake in the bank. Kotak Bank denied of having any knowledge of any such developments. HCL Technologies shares closed nearly 5% down after the company agreed to buy certain software businesses from IBM. Adani Ports, Bajaj Auto, Asian Paints and Baja Finance were other top gainers on the key indices, whereas Sun Pharma, Coal India, Yes Bank, India Bulls Housing Finance and NTPC were among the major losers.In global markets, European stocks rebounded from the worst day in more than two years and Asian shares posted modest gains as investors sought to end a bruising week on a more upbeat note. Oil prices declined Friday as OPEC discussed a potential exemption from cutting output for Iran and as the producer club sought to get heavyweight supplier Russia on board.Here are the highlights from the markets today: Kotak Mahindra Bank shares erased half of their gains after the bank clarified to the stock exchanges that it is unaware of any purchase plans by Warren Buffett’s Berkshire Hathaway Inc. The stock traded 6.47% up at Rs 1257.95 per share.Earlier, CNBCTV18 reported that Berkshire Hathaway is looking to buy a 10% stake in Kotak Bank valued at between $4 billion and $6 billion. Following the announcement, the stock surged as much as 13.87%, its biggest jump since May 2009, to hit a high of Rs 1,345.35 a share.

Why HCL-IBM deal is failing to excite investors

The HCL-IBM deal, which accounts for nearly 22% of HCL Technologies's annualized revenue, is expected to close by mid-2019. https://t.co/Hwyte1HR4y

Dilip Buildcon shares traded 2.58% up at Rs 443 per share. The company said it has received a letter of acceptance for a new contract valued at Rs 1,000.36 crore by the Mahanadi Coalfield Ltd, a unit of Coal India. Further, the company has denied a news report that it was fined Rs 33.78 crore for excavation work in Maharashtra as reported by MoneyControl.com. The company said it has not received any such demand notice.

Order flows for heavy-duty Class 8 trucks in North America have taken a U-turn, and fell 35% in November. https://t.co/hl9MCIbie8

SEBI in talks with industry on mutual funds norm

Sebi is in talks with industry to deal with fears of contagion effect on mutual funds due to a liquidity crisis faced by the country’s non-banking finance companies (NBFC), Sebi chief Ajay Tyagi said. “We are examining, in consultation with the industry, and will gradually take appropriate action,” Ajay Tyagi, chairman of SEBI said in response to a question if changes are needed in mutual fund regulations.

■ Girish Pai, head of equity research at Nirmal Bang Equities Pvt, said: “The market is grappling with the question of whether HCL has bitten too much, too early with this deal. This is a bet the company is taking as a new source of growth, but this revenue stream isn’t going to deliver you great return ratios.”■ Neerav Dalal, an analyst at Kim Eng Securities Pvt. in Mumbai said, “The market is divided on whether it is a good thing to get into an intellectual property business, which has inherent risks and volatility. Post this deal, the IP business will contribute roughly 20 percent to HCL’s revenue from the current 12 percent.”HCL Tech shares fell as much as 7.6% intraday to Rs 935 per share on BSE.

Shares of Kotak Mahindra Bank jumped as much as 7.8% to Rs 1274 per share after CNBCTV18 reported that Warren Buffett’s Berkshire Hathaway Inc is planning to invest about $4 billion to $6 billion in the bank. Berkshire Hathaway may invest in the lender by buying promoter stake or through a preferential allotment, the television channel reported.

The telecom sector is at the cusp of an anomaly with no clear market leader emerging on key growth metrics. https://t.co/DCCFFQCw2J

HCL Tech shares extended losses and fell as much as 6.8% to Rs 943.10 per share on BSE. The company today said it has agreed to acquire seven IBM software businesses focused on markets such as e-commerce and human resources for a total consideration of $1.8 billion.

Power Finance Corp Ltd shares as mucha s fell 4.7%, while REC shares rose 1%. Finance Minister Arun Jaitley said the Cabinet Committee on Economic Affairs approved strategic sale of 52.63 percent stake in REC to PFC. along with management control. He expected the deal to be completed by the end of the financial year. A Government official said with PFC buying government’s stake in REC, Government’s divestment receipts will reach around Rs 53,000 crore to Rs 54,000 crore. 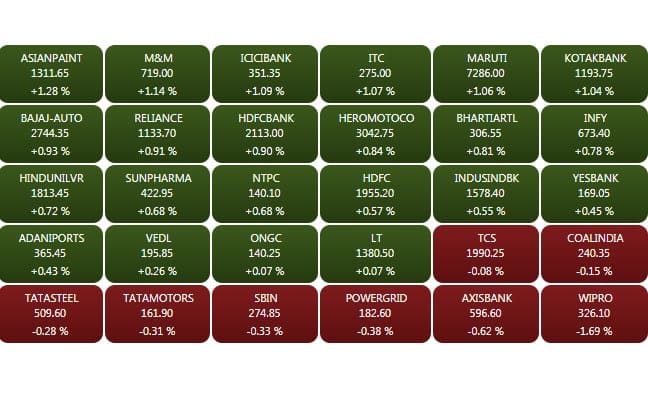 Jet Airways shares rose as much as 3.7% to Rs 288.55 per share after Mint reported that Etihad Airways PJSC of Abu Dhabi has offered to guarantee loans worth $150 million that Jet Airways (India) Ltd needs to keep the airline operational. The development follows several rounds of talks between the two sides which also included a potential equity infusion by Etihad Airways and adding a third Indian partner.

HCL Tech shares down over 3%

Shares of HCL Technologies fell as much as 3.3% to Rs 978.50 per share. The company today said it has agreed to acquire seven IBM software businesses focused on markets such as e-commerce and human resources for a total consideration of $1.8 billion.

The Indian rupee strengthened against the US dollar after crude oil prices fell below $60 per barrel after OPEC delayed its decision on output cuts. Traders await exit poll results of five state elections due after market hours today. At 9.10am, the rupee was trading at 70.52 a dollar, up 0.54% from its Thursday’s close of 70.90. The currency opened at 70.56 a dollar. The 10-year government bond yield stood at 7.401% from its previous close of 7.423%.

Cryptocurrencies continued their slide with a fresh bout of losses Friday after the SEC dashed hopes that a Bitcoin exchange-traded fund would appear before the end of this year. Bitcoin, the largest cryptocurrency, slumped as much as 7.8 percent, taking it down past $3,400 to the lowest level since September 2017, according to consolidated pricing compiled by Bloomberg. The wider Bloomberg Galaxy Crypto Index sank 10 percent as rival tokens including Ether, Litecoin and XRP also retreated. The Securities and Exchange Commission plans to decide by Feb. 27 whether to approve a proposed ETF from financial-technology company SolidX Partners Inc. and asset manager Van Eck Associates Corp., the agency said Dec. 6. Bloomberg

Oil prices fell, pulled down by OPEC’s decision to delay a final decision on output cuts, awaiting support from non-OPEC heavyweight Russia. International Brent crude oil futures fell below $60 per barrel early in the session, trading at $59.50 per barrel, down 56 cents, or 0.9 percent from their last close. US WTI crude futures were at $51.24 per barrel, down 25 cents, or 0.5 percent.Gold prices rose slightly and were headed for their best week in 15, as the dollar weakened following a decline in U.S. Treasury yields, while investors awaited U.S. nonfarm payroll data for clues about the health of the world’s top economy. Spot gold was up 0.1 percent at $1,239.24 per ounce, as of 0125 GMT, having hit a near five-month peak at $1,244.32 per ounce in the previous session. U.S. gold futures were up 0.1 percent at $1,244.6 per ounce.Metals: London copper climbed 1 percent on Friday as reports that the U.S. Federal Reserve could pause from raising interest rates helped the metal recover from its steepest slide in five weeks in the prior session. Three-month LME copper was up 1% at $6,129.50 a tonne. The most-traded February copper in Shanghai slipped 0.1% to 49,090 yuan ($7,130) a tonne. LME aluminium edged up 0.5 percent to $1,945.50 a tonne and zinc gained 0.1 percent to $2,596.50. Reuters

Asian stocks posted modest gains Friday following an afternoon rally in the U.S. that erased most of the day’s losses, as investors grappled with shifting indications on U.S.-China trade talks and prospects for a pause in Federal Reserve tightening. Shares rose in Hong Kong, South Korea and Australia, though Japan’s benchmarks struggled to hold their early advance. Futures on the S&P 500 Index were little changed after the U.S. equity market recovered the bulk of the day’s declines on Thursday, though still ended lower.The MSCI Asia Pacific Index was up 0.3% as of 10:37 a.m. in Tokyo Japan’s Topix index added less than 0.1%. Hang Seng rose 0.4%. The Shanghai Composite rose 0.2%. Australia’s S&P/ASX 200 Index gained 0.7%. Futures on the S&P 500 were little changed. The S&P 500 fell 0.2% on Thursday. Bloomberg