So far so good for DCB Bank

Of the three banks that have declared results so far, DCB Bank Ltd seems to have gained the most from the 50 days of demonetization in the third quarter. The lender saw its deposits surge with the current and savings account ratio rising to 26%, an expected outcome. But its core income and loan growth held up and its bad loan stock declined—these are places where the currency withdrawal was supposed to hurt.

Net interest income grew by 31% to Rs209 crore, enabling the bank to increase its profit by 25% to Rs51 crore for the quarter ended December. Its loan book also grew by 24%, a shade lower than the 26% growth seen in the previous quarter but nevertheless closer to the average of recent years. 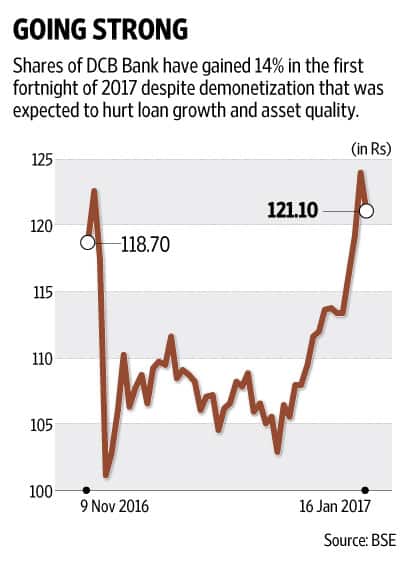 Much like the other two private sector peers (IndusInd Bank and South Indian Bank), DCB Bank’s management indicated that loan disbursals took a hit in the initial days of demonetization, only to recover later.

But the lender gained the most on bad loans. Its gross non-performing assets (NPAs) fell both in absolute terms and as a percentage of total loans. Its gross NPA ratio slipped to 1.55% from 1.75% in the previous quarter, while net NPA ratio fell 20 basis points to 0.74%. This fall was mainly in the mortgage loan, SME (small and medium enterprises) and corporate loan portfolios.

DCB Bank has indeed met investors’ expectations on most metrics and should justify the near 14% surge in its stock price in the first two weeks of 2017. Recall its stock shed 10% in the 50 days of demonetization.

But it would be good to note some potential misgivings. Many of its SME customers repaid loans in old notes, according to the management. Thus, recoveries shot up to Rs641 crore and this could be a one-off. In light of slippages rising and upgrades showing not much improvement, the surge in recoveries may not be repeated. Investors should watch out for one more quarter to judge whether the price- to-book value, at a multiple of 1.4 times its estimated earnings for 2016-17, is a decent valuation.