OTHERS : Mumbai: The BSE Sensex and NSE’s Nifty 50 fell 1.5% on Wednesday, mainly due to losses in IT, auto and telecom stocks. Shares of auto companies such as Mahindra and Eicher Motors declined after disappointing September vehicle sales data. The rupee weakened past the 73 mark against the US dollar for the first time today after crude oil prices surged above $85 per barrel. Meanwhile, FIIs sold shares worth Rs 1,841.63 crore on nets basis on Monday, while DIIs purchased equities to the tune of Rs 1,804.94 crore, provisional data showed. In global markets, European stocks climbed alongside the euro, and Italian bonds rallied on reports the government will rein in spending plans. Asian stocks dropped as investors weighed continuing concerns in Indonesia and India and strength in commodity prices. Oil traded above $85 a barrel and near a four-year high, supported by expectations that US sanctions on Iran will tighten supply. Here are the highlights from the markets: 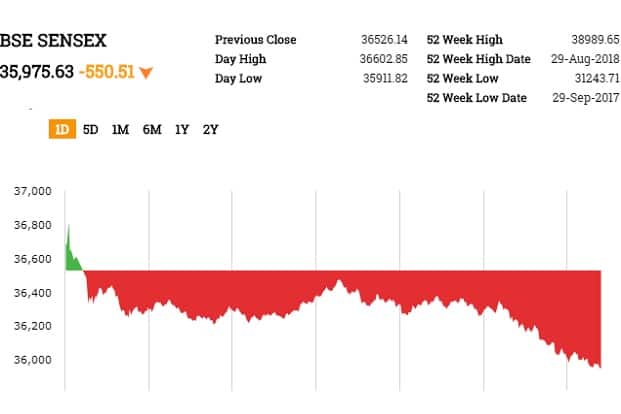 Rupee trades below 73 a dollar: 5 things to know

The rupee today fell sharply to hit a new low against the US dollar, amid a surge in global crude prices. The government is mulling a special NRI deposit scheme to boost dollar inflows, news agency NewsRise reported, citing an unnamed finance ministry official. The rupee hit an intra-day low of 73.42 against the US dollar. Read more

Auto stocks extended losses with the Nifty Auto Index falling over 2.6% dragged by Mahindra and Eicher Motors. Passenger car sales fell for the third straight month in September, hit by a slew of factors led by erratic monsoon rainfall and a devastating flood in Kerala. Car makers on Monday said unfavourable macroeconomic conditions and the high base of last year also contributed to the decline. Read more 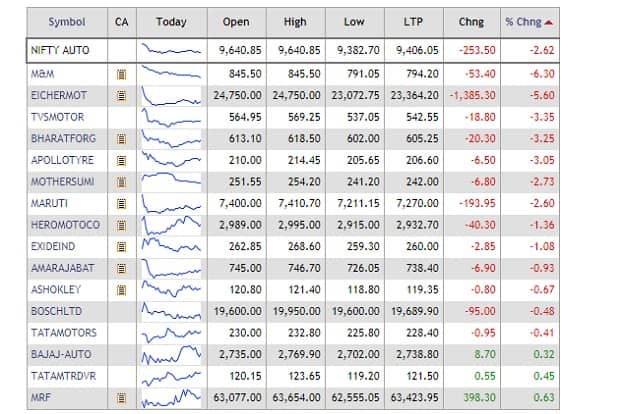 After delaying salary to pilots and engineers along with the senior management, Jet Airways has now defaulted on the payment of September salary to other categories of employees as well, reported PTI, citing an airline source said on Wednesday. Employees in A1-A5, O2 and O3 grade, or whose salaries were up to Rs 75,000 per month, were paid on 1 October, while the rest of the staffers in the M2, M3, E1 and above grades had not been paid yet, the source added. Shares traded 3.08% up at Rs 177.20.

Dr Reddy’s recalls around 70,000 vials of Zoledronic acid injection from US

Dr. Reddy’s Laboratories Ltd’s US unit is recalling around 70,000 vials of Zoledronic acid injection manufactured by Gland Pharma from the US market, according to the latest report of the USFDA. The vials are being recalled on account of “Out-of-specification result observed for related substance: unknown impurity,” the report said. The product was distributed to retailers, distributors, physician officers and medical facilities throughout the United States, it added. Shares traded 0.75% down at Rs 2,492.50. PTI

Global gold prices hit highest in more than a week on Wednesday as the dollar softened and demand for the safe-haven metal got a boost on concerns surrounding Italy’s plans to tackle budgetary deficit. Risk appetite was hit after European Union (EU) officials expressed concerns about Italy’s budget plan, which would widen the deficit significantly. The deficit blowout revived fears of the eurozone debt crisis. However, the debt fears were tempered on reports that Italy will cut its budget deficit at a faster pace than expected. Read more

Hindustan Oil Exploration Co. Ltd shares rose 5.29% to Rs 134.25. The company said it has signed a revenue sharing contract with the government for an oil and gas block in Assam that it had won in the first round of Open Acreage Licensing Policy.

Metal stocks traded higher as metal prices rose. The Nifty Metal Index rose 2.68% led by National Aluminium Co., Welspun Corp. and Vedanta. Aluminium prices climbed to the highest in more than a month on Wednesday, supported by tighter global supply with stockpiles of the metal in London Metal Exchange warehouses falling to the lowest in more than a decade, reported Reuters. Three-month aluminium on the LME was up 0.9% at $2,137 a tonne by 12.42pm, after earlier hitting $2,142, its loftiest since Aug. 31. 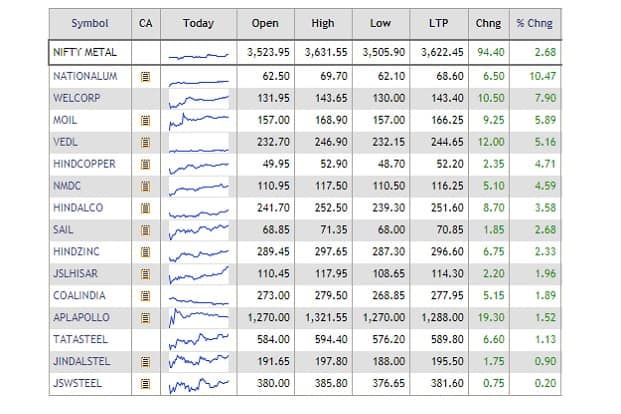 The London and Paris stock markets rose at the start of trading on Wednesday, amid a holiday closure in Frankfurt. In initial deals, the British capital’s benchmark FTSE 100 index of major blue-chip companies was up 0.3 percent at 7,498.24 points. In the eurozone, the Paris CAC 40 climbed 0.3 percent to 5,485.02, compared with Tuesday’s closing level. AFP

Maruti Suzuki India Ltd said it will recall 640 Super Carry vehicles manufactured between January 20 and July 14 to inspect for a possible defect in fuel pump assembly. Starting October 3, dealers will reach out to the customers for inspection and replacement of the faulty part free of cost, the company said in a BSE filing. Shares traded 2.035 lower at Rs 7,314.

Cabinet set to raise support prices for wheat by 6%: Report

The government is set to raise the government-mandated prices for wheat by 6% on Wednesday to Rs 1,840 ($25.17) per 100 kg, two government sources told Reuters. The sources declined to be named ahead of an expected official decision later on Wednesday. The government announces minimum support prices for most crops to set a benchmark. Reuters

Tata Steel shares rose as much as 1.74% to Rs 593.70. Thyssenkrupp AG’s supervisory board unanimously approved a plan on Sunday to split the company into two units, and named Bernhard Pellens as its chairman. Under the restructuring, Thyssenkrupp Industrials will manage the elevator, automotive supplies and plant construction businesses while Thyssenkrupp Materials will run steel and metal-focused operations. The executive board had proposed the changes on Thursday.

Thyssenkrupp's split could give Tata Steel an advantage @ravi_ananth https://t.co/Nparj3WqtF

Shares of auto companies traded lower following disappointing September sales data. Passenger car sales fell for the third straight month in September, hit by a slew of factors led by erratic monsoon rainfall and a devastating flood in Kerala. Car makers on Monday said unfavourable macroeconomic conditions and the high base of last year also contributed to the decline. Read moreIndia’s top five carmakers—Maruti Suzuki India Ltd, Hyundai Motor India Ltd, Mahindra and Mahindra Ltd, Tata Motors Ltd and Honda Cars India Ltd—together sold 237,009 units last month, a 2% drop from the figure a year ago. Auto makers in the country consider factory dispatches to dealerships as sales.Motilal Oswal Securities: “We believe that Sep-18 wholesale volumes need to be seen in light of the timing difference of the festive season this year vis-à-vis the last year, as reflected in the decline in tractor and PV volumes. However, 2W volumes benefited from inventory build-up ahead of the festive season. CV demand also remained strong, despite the noise around an increase in rated load. Exports of 2Ws and 3Ws remained robust. Key highlights from Sep-18 wholesale volumes (incl. exports).” The brokerage listed Maruti Suzuki and Motherson Sumi Systems as top picks among large caps, and Ashok Leyland and Exide Industries among midcaps.Prabhudas Lilladher: “With all players pumping in inventory before the start of the festive season, retails in October would be key for both 4Ws & 2Ws to ascertain consumer sentiment and demand. We expect growth momentum for the CV and Tractor segment to continue over the festive season. For that reason, M&M and Ashok Leyland remain our top pick.” 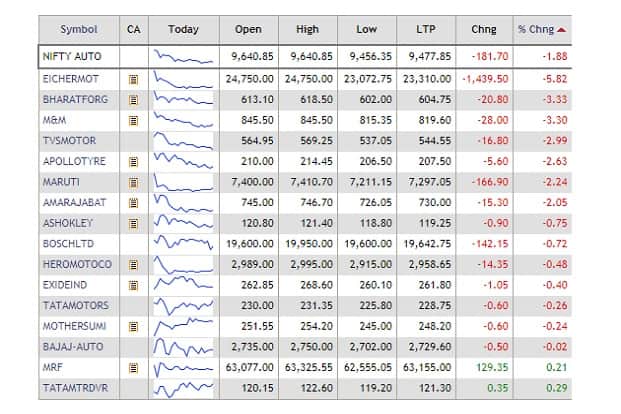 Yes Bank shares traded 6.11% up at Rs 213.50 per share. The bank on Monday released a part of its unaudited financial statement for Q2 of FY19 and said that gross bad loan ratio fell 47 basis points (bps) year-on-year (y-o-y) to 1.35%. Gross bad loan ratio is total non-performing assets (NPAs) as a percentage of gross advances. In early trade, the stock surged as much as 10.65 to Rs 222.70 per share.“While the near term uncertainty will remain till the new management takes charge and enunciates the business strategy, we believe that post sharp correction the stock is trading at reasonable valuations,” said Motilal Oswal Securities. The brokerage maintained “buy” rating with a TP of Rs 350.

DCM Shriram Industries shares rose 9.17% to Rs 178 per share after the company said it has received industrial licences by the government’s department of industrial policy and promotion.

Shares of ILFS group companies hit their upper circuit after the NCLT approved the government’s appointment of new directors, including Uday Kotak as non-executive chairman. IL&FS Transportation Network rose 19.85% to Rs 32.30, IL&FS Engineering and Construction Company gained 19.98% to Rs 19.22 and IL&FS Investment Managers was up 9.91% at Rs 9.43.

Oil prices trade near $85 per barrel on Iran sanctions

Oil prices were firm on Wednesday on expectations of tighter markets once U.S. sanctions target Iran’s petroleum industry from next month, although a strong dollar and rising U.S. crude supply curbed gains. Brent crude oil futures were at $84.86 per barrel at 9.10am, up 6 cents from their last close. U.S. West Texas Intermediate (WTI) crude futures were up just 1 cent at $75.24 a barrel. Read more

Shares of Hathway Cable and Datacom Ltd rose as much as 9.8% to Rs 27.80 per share after the Economic Times reported that Reliance Industries has initiated talks to acquire Hathway Cable in a bid to speed up the commercial launch of its home broadband services. Reliance shares rose 0.06% to Rs 1,232.25 per share.

Shares of Maruti Suzuki India fell 3% to Rs 7240 after its sales fell for the third month in a row. The country’s largest automaker sold 1.62 lakh units last month, a decline of 0.5%.

Bringing matters to a head, IL&FS defaulted on several payment obligations since Augusthttps://t.co/FeSVEJPWRu

Rupee slips below 73 a dollar for first time

Oil: Oil prices were firm on expectations of a tighter market once US sanctions start targeting Iran’s petroleum industry from next month, although a strong dollar and rising US crude supply curbed gains. Brent crude oil futures were trading at $84.89 per barrel, up 9 cents from their last close. US WTI crude futures were up 5 cents at $75.28 a barrel.Gold: Gold prices edged up after gaining over 1% in the previous session, buoyed by safe-haven demand as Italy’s budget plan sets it on course for a potential clash with the European Union. Spot gold rose 0.3% to $1,206.09. US gold futures were up 0.3% at $1,210.10 an ounce.Metals: Copper edged lower and zinc retreated from a near three-month peak as the dollar strengthened against a basket of currencies, with Asian activity still muted by a week-long break in top metals consumer China. Three-month LME copper was down 0.2% at $6,269 a tonne. Zinc was little changed at $2,664.50 from Tuesday’s close. Reuters

■ Asian markets opened lower. Overnight, US stocks closed mixed amid concerns about the US-China trade relations and Italy’s mounting debt.■ Care Ratings has put certain debt instruments of Yes Bank under watch. The rating was influenced by the Reserve Bank of India’s (RBI’s) decision to cut short the tenure of the bank’s managing director and chief executive Rana Kapoor.■ Reliance Industries Ltd has initiated talks to acquire cable operator Hathway Cable & Datacom in a bid to speed up the commercial launch of its home broadband services, reports The Economic Times.■ The average truck utilization rate for transporters rose sharply in the September quarter, making it the best in five years, reports Business Standard. According to the report, typically the demand is subdued during monsoons.■ Tata Motors Ltd expects to clock 20% growth in its commercial vehicles segment in fiscal 2018-19, riding on an overall uptrend in the economy, reports PTI.■ Coal India is in talks to buy stake in an Australian coal mining company, reports Business Standard. According to the report the company plans to set up an office in Brisbane this year. R. Sree Ram/MintWith inputs from Reuters