How markets fared in Samvat 2073

Despite demonetisation and GST disruptions, a constant flow of fundsfrom domestic and foreign investorspushed BSE Sensex and Nifty to a record high by the end of Samvat 2073

Indian stock markets, much like the larger economy, experienced two major shocks in the just-ended Samvat, the period between one Diwali and the next.

One was the 8 November demonetisation (invalidation of high-value banknotes), which caused an unprecedented cash crunch, and the other was the 1 July implementation of the goods and services tax (GST) which disrupted supply chains and squeezed corporate earnings.

Yet, a constant flow of funds, initially from foreign investors, and through the year from domestic investors, pushed markets to a record high by the end of Samvat 2073. The Sensex gained 16.67% and the Nifty 18.38%. Small-cap and mid-cap indices rose even more. Optimism about government reforms and a second straight year of good monsoon rains, expected to spur consumption, were key reasons for the rally. Although Indian markets have risen to records this year, they have underperformed other Asian markets—Hong Kong, Korea and Japan. While Indian stock indices have outperformed many developed markets, high valuations and a delayed corporate earnings recovery have crimped gains. 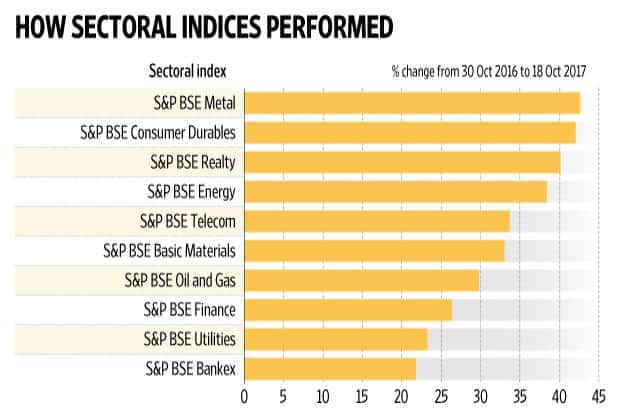 Healthcare stocks underperformed throughout the year, falling over 13% in Samvat 2073. Technology stocks were also under pressure. Metal company stocks gained as metal prices increased due to a revival in global demand and expectations of Chinese production cuts. Oil and gas stocks also jumped as international crude prices rose. Brent oil prices were near a 26-month high in September. Domestic liquidity flows in Indian stock markets grew robustly in the year because of a lack of positive returns from other asset classes such as gold and real estate. It was a record year for mutual fund inflows into equities. Overall investments by domestic funds and insurance companies were the highest in at least 10 years. Foreign institutional investors, however, started pulling out in the latter half of the year because of a delayed earnings recovery. 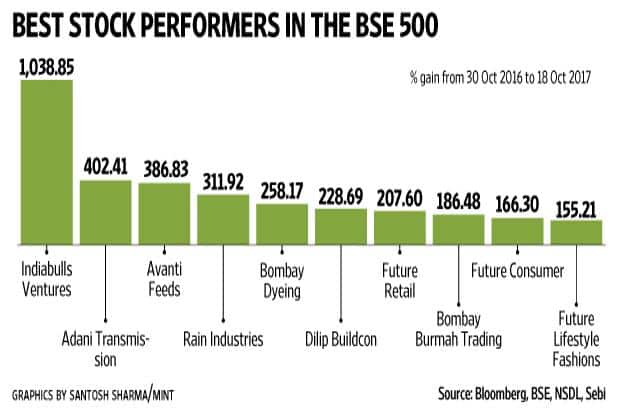