The drop in two-wheeler sales growth is a cause for concern. According to cumulative data provided by the Society of Indian Automobile Manufacturers (Siam), two-wheeler sales between April and September grew by a paltry 3.1% over the same year-ago period. Compare this to the scorching 17.4% growth rate in April-September 2011.

The outlook, too, is grim. Siam aggressively cut its growth forecast twice in the last four months for the auto universe. Its two-wheeler sales growth forecast for fiscal 2013 at 5-7% is nearly half its earlier estimate.

Of greater consequence is the shift in industry dynamics. First, the consumption pattern is changing in favour of gearless scooters from motorcycles. Corroborating this is the 20.5% growth clocked by scooters compared with the 0.8% decline in motorcycle sales in the six-month period under review. This could be because of the higher number of women opting for two-wheelers as a mode of transport, giving priority to easy handling and trendy looks. The share of scooters as a percentage of overall two-wheeler sales has risen significantly in the last few quarters. 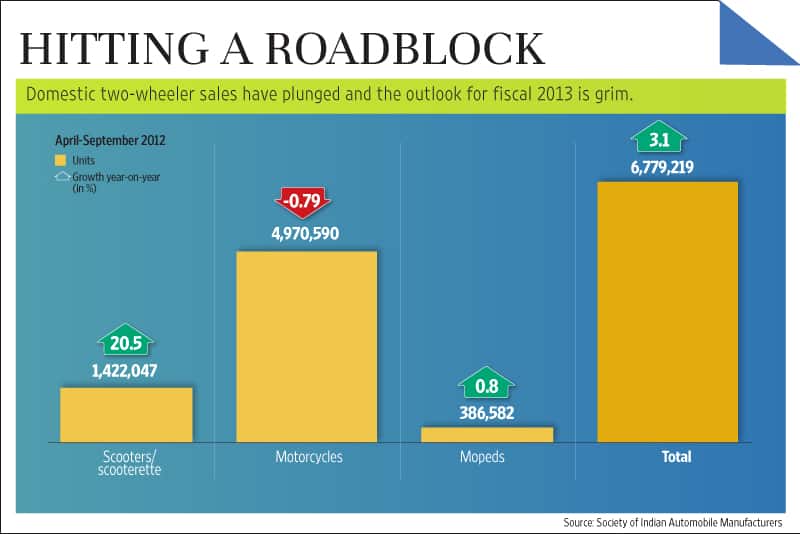 Second, global companies such as Honda Motor Co. Ltd and Yamaha Motor Co. Ltd are giving the two home-grown market leaders—Hero MotoCorp Ltd and Bajaj Auto Ltd—a run for their money. CLSA points out in a recent report that in spite of the growing size of the motorcycle market, Hero’s share of the pie could drop from 56% in fiscal 2012 to 52.7% in the current year. Bajaj’s share may fall from 25.4% to 24.8%. Eating into this pie would be companies such as Honda, whose share is estimated to climb from 7.6% to 12.1%.

Third, more companies during a slowdown lead to higher discounts to lure customers. Obviously, along with falling sales volumes, this is bound to hit revenue and profit margin growth. For example, according to Brics Securities Ltd, a volume growth of 14% during the September quarter for Hero is insufficient to support revenue expansion—net revenue is estimated to be about 12% lower than in the year-ago period. The same trend is expected at Bajaj, too. More importantly, operating margins for the quarter will be lower by 100-150 basis points for these two firms. A basis point is one-hundredth of a percentage point.

Weak demand, rising competition and a changing product mix could lower earnings growth for both Bajaj and Hero. In fact, most brokerage firms have lowered their earnings estimates for two-wheeler makers for fiscal 2013 and 2014. The drop in the stock prices of these firms is, therefore, not surprising.