Thanks for Visiting Mint
You seem to have an Ad Blocker on. Please turn it off in order to continue, or whitelist Mint
HOW TO TURN OFF AD BLOCKER
OR
REFRESH IF YOU ALREADY TURNED OFF THE AD BLOCKER
Home >Money >Calculators >Ignore the gadgets, go for the cash discount

Ignore the gadgets, go for the cash discount

Chetan Verma, 29, and Babita Soni, 26, got married last year. They prefer to live in an apartment and are looking for a 3-bedroom apartment that fits their budget in the National Capital Region. Though Verma works for a bank in Gurgaon, he finds the property prices of ready-to-move-in projects there too high. Which is why he is considering properties in Noida and Ghaziabad, where property prices are relatively lower. He is taking into consideration various festival deals that have been announced by developers, so that he can get some extra benefit and make a decision soon.

Developers and buyers both look forward to the end-of-the-year festival season, which typically starts from October and ends around March, because, apart from these days being considered auspicious, many people receive bonuses, which along with discounts, offers and freebies attract buyers. Buyers can cash in on the schemes if they find a suitable property. However, unlike past few years, the buzz is lesser this year, and fewer discounts and schemes are being announced. Last year, the sentiment was more positive owing to the new government and some home buyer-friendly announcements that it had made. This year, the pace of economic recovery has been slow. Anuj Puri, chairman and country head, JLL India, said, “Overall, the market has not been performing according to expectations."

Some industry participants feel that properties have become more affordable now as there is no upward move in prices for quite some time, but the number of transactions have remained low. This is a situation that works in the favour of buyers. “There is increased affordability for potential buyers," said Sanjay Dutt, managing director, India, Cushman & Wakefield, adding that developers, however, are not seeing the level of activity they were expecting. 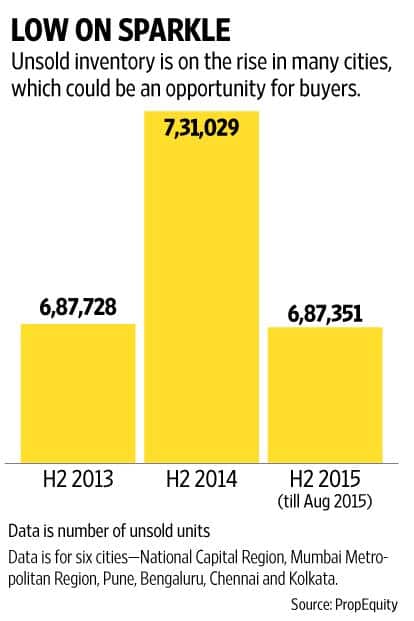 Another indicator of a dull market and which is good news for home buyers is that unsold inventory is high even as project launches have come down. According to real estate data analytics firm PropEquity, the number of unsold units in six cities (NCR, Mumbai Metropolitan Region, Pune, Bengaluru, Chennai and Kolkata) in the second half of 2013 was 687,728, which increased by about 7% to 731,029 in the second half of 2014. Till August 2015, the number was already 687,351.

The number of transactions may be low, but there are many home buyers out there like Verma and Soni who are keen to take a decision soon, provided they find a suitable property. And they will be keenly looking out for discounts and other offers.

The most common offers are cash discounts, giving home appliances or vehicles and lucky draws. This year, too, there are such offers for home buyers. For instance, SVP Group, an NCR-based real estate developer is offering air conditioners in all bedrooms in Mohan Nagar and a discount of 5 lakh on its projects in Raj Nagar Extension. Fairwealth Group, an investment solution firm that has ventured into real estate is offering home buyers a chance to win a Renault Kwid car on its project Breeze Homes, Bhiwadi, during this festival season. Noida-based Amrapali Group is offering a discount of 250 per sq. ft for the festival season in their newly launched project in Greater Noida. Vianaar Homes Pvt. Ltd has announced a draw where if one buys a property from it in Goa this season, she will have a chance to get a free-of-cost furnishing done. Among the bigger developers, some offer such deals to home buyers, while others don’t.

While these offers look attractive, home buyers may still get more attracted towards flexible payment plans. “Offers and incentives such as subvention schemes and flexible payment options have been in the market since a few quarters, and we foresee these to continue to evince buyers’ interest," said Dutt.

Others continue to see this as an opportunity to attract buyers. “Keeping in mind the festival season, which begins mid-October, we will be launching our One Nation One Price campaign again this Diwali in which buyers will be able to buy units at a uniform price across our projects in Ahmedabad, Bengaluru, Mumbai, Pune and Chennai," said Brotin Banerjee, managing director and chief executive officer, Tata Housing Development Co. Ltd.

Though there are various types of offers and schemes floating in the market, a home buyer has to critically analyse them before making a buying decision. Here’s a look at some to understand what they really mean.

Cash discounts: These are something that home buyers could consider. “Hard discounts are definitely the most desirable scenario for end users and investors. But even in the case of discounts, investors should establish what the prices were prior to the discount announcement," said Puri. While some developers offer cash discounts upfront, with others you may have to negotiate hard. “Discounts in the range of 15-20% may be made in across-the-table discussions," said Samir Jasuja, founder and managing director, PropEquity.

Other schemes that will bring down your cost of acquisition can be considered. “Offers wherein developers waive stamp duty and registration can also be considered, as this translates into an actual saving on the cost of the property," added Puri.

Pre-launch offer: The heaviest discount that you are likely to get is typically in a project that is to be launched or has recently been launched. These discounts can even be as high as 250-500 per sq. ft. So, a 1,000-sq. ft house that cost 40 lakh otherwise at 4,000 a sq. ft would cost 35-37.5 lakh. However, considering the prevailing market conditions, try to avoid pre-launch projects, irrespective of the discounts. There are many instances of construction starting only 18-24 months after a project has been launched.

Risk is high in projects that are under construction, especially those that are already running way behind schedule. According to a recent report by Moody’s Investors Service, project execution delays are expected to persist. Especially avoid projects that are expected to take longer than 6-12 months to complete from the time you decide to buy it. Though these are cheaper, go for a ready-to-move-in house because project delays will eventually eat up the cost benefit.

Freebies: Freebies such as electronic appliances, consumer goods, gold coins, holiday packages and gift vouchers are likely to be on offer this year too. But these translate into very marginal discounts. For the more expensive things, the cost is bundled with the apartment cost. Your decision should not get influenced by these offers; adhere to the more important and fundamental factors such as developer’s reputation, project quality and features.

Though these offers and discounts coupled with some reduction in interest rate of home loans are likely to attract home buyers, what they really want is a real decrease in prices. “Selling prices must come down before any significant revival can take place. Reduced interest rates alone are not sufficient," said Puri.

If you have found a suitable property and have the required money, this is a good time to make things work in your favour, negotiate hard with builders and take a decision.