Mark to Market | Steel producers hope for a revival

The optimism seems a bit premature, and is based on hope authorities will succeed in reviving growth

All major steel producing regions saw a decline in crude steel production in August, dragging down production to a decline of 1% year-on-year (y-o-y). The economic worries facing prominent regions that prompted some leading central banks around the world to provide monetary support are evident in the steel sector’s performance.

China’s steel production declined by 1.7% y-o-y and fell by 4.9% sequentially. Rising steel inventories with local producers and a slowdown in demand would have been the main reasons for the decline. China’s influence on steel output is undeniable, as it has a 47% share in output, but the western world gets more credit for the decline.

The European Union’s output declined by 4.4%, reflecting the impact of the region’s slowing economic growth. Apart from a demand effect, the cut in output also reflects capacity reductions by companies as they try to balance the demand-supply situation. Sequentially, the decline was a sharp 14.5%. 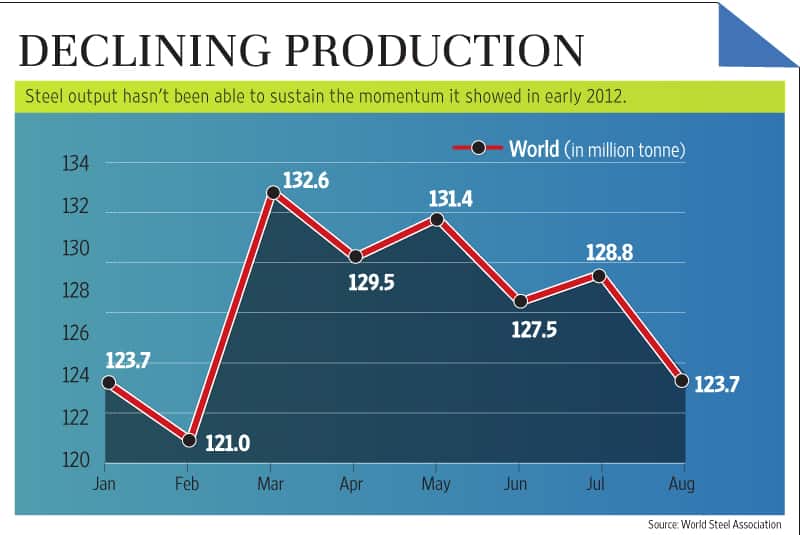 Companies have been saying, especially in Europe, that they are shuttering unviable units to cut losses. That may explain why reported capacity utilization has declined from 81.1% in June to 75.5% in August. If this leads to a more balanced situation, then in time steel prices may begin to get support from a tighter supply situation.

That is one positive for steel makers, especially if they continue to exercise restraint on production. Another is the liquidity support being provided by central banks in the western world, which gives growth a better chance at recovering.

Closer to home, China appears to be keen on supporting an economic revival, which seems to have been taken by the market for granted. In the past fortnight, Chinese flat steel prices have risen by 10%, while iron ore prices are up by 20% (some of this could be attributable to the suspension of iron ore mining in Goa).

The optimism seems a bit premature at this stage, and is based on hope that monetary authorities and governments will succeed in reviving economic growth. Their success or failure will determine if the steel industry can get out of the rut it finds itself in.