The disclosure that Japan's cryptocurrency exchange Coincheck lost about $400 million in NEM coins is spooking investors in a country still wary of such venues 4 years after the collapse of Mt. Gox

Tokyo/Singapore: The disclosure that one of Japan’s biggest cryptocurrency exchanges lost about $400 million in NEM tokens is spooking investors in a country still wary of such venues four years after the collapse of Mt. Gox.

After hours of speculation Friday night, Coincheck Inc. said the coins were sent “illicitly" outside the venue. Co-founder Yusuke Otsuka said the company didn’t know how the 500 million tokens went missing, and the firm is working to ensure the safety of all client assets. Coincheck said earlier it had suspended all withdrawals, halted trading in all tokens except bitcoin, and stopped deposits into NEM coins.

“We know where the funds were sent," Otsuka said during a late-night press conference at the Tokyo Stock Exchange. “We are tracing them and if we’re able to continue tracking, it may be possible to recover them. But it is something we are investigating at the moment."

The disappearance likely ranks among the biggest losses or thefts of investor assets since the advent of digital currencies with the launch of bitcoin in 2009. Japan’s Financial Services Agency said in a statement it is “looking into the facts surrounding Coincheck." 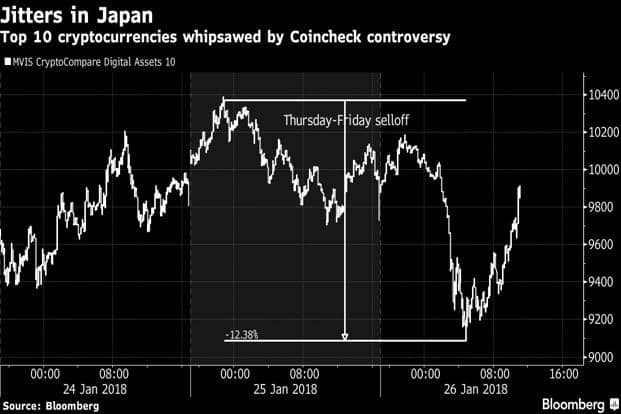 NEM, the 10th-largest cryptocurrency by market value, fell 11% over a 24-hour period, to 87 cents, as of 2:30pm Tokyo time Saturday, according to Coinmarketcap.com. Bitcoin dropped 3.4% and ripple retreated 9.9% on Friday, according to prices available on Bloomberg.

“Caveat emptor," said Yvonne Zhang, who had spoken on a panel on the future of cryptocurrencies at an Association of Futures Markets conference in Bangkok on Friday. “The ‘investors’ that did not do due diligence and take time to understand what they’re trading in, both venue and subject matter, face unhedgable risks. If they continue to ‘trade’ the same way knowing the murky nature of this market, they’re gambling."

“I’m shocked," Takeshi Fujimaki, an opposition Japan Innovation Party politician who once served briefly as an adviser to George Soros, tweeted on Saturday. He wrote that he has an investment of more than ¥10 million worth of bitcoin in Coincheck. 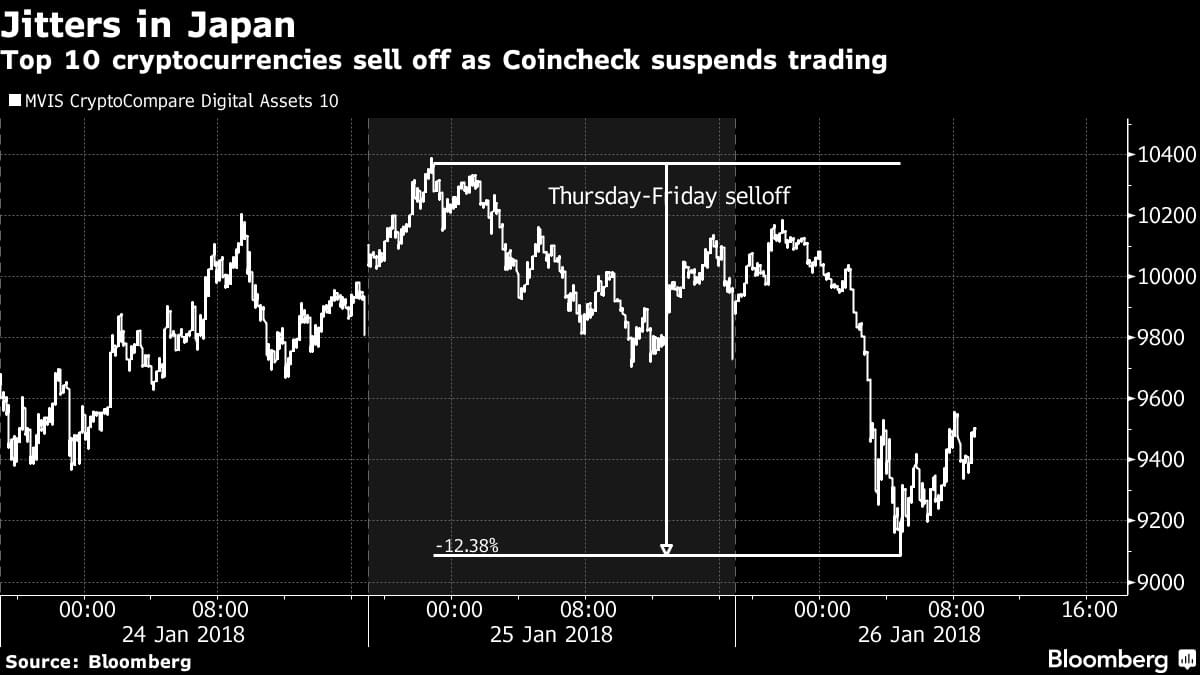 In Japan, one of the world’s biggest markets for cryptocurrencies, policy makers have introduced a licensing system to increase oversight of local venues, seeking to avoid a repeat of the Mt. Gox exchange collapse that roiled cryptocurrency markets worldwide in 2014. At that time, the theft of bitcoin was estimated at about $450 million, though the figure was revised down later.

Coincheck had applied with the agency for a license as an exchange, and was able to continue operating under the FSA’s rules while awaiting a decision. As a result, Coincheck falls under the supervision of the agency, an official said.

Cryptocurrency exchanges, many of which operate with little to no regulation, have suffered a spate of outages and hacks amid the trading boom that propelled bitcoin and its peers to record highs last year.

“What’s the lasting impact? It’s hard to tell," said Marc Ostwald, global strategist at ADM Investor Services International in London. “Japan is one of the most pro-crypto trading countries, among the G-20. In Japan they don’t really want a wholesale clampdown. So it will be interesting how Japanese regulators respond to this, if they indeed do."

Like bitcoin, NEM is a cryptocurrency built on top of blockchain, but it uses a more environmentally-friendly method to confirm transactions, according to its website. Bitcoin mining requires significant computing power, while NEM says it does not.

Coincheck, founded in 2012, had 71 employees as of July with headquarters in Tokyo’s Shibuya district, an area popular with startups that was also home to Mt. Gox, according to Coincheck’s website. Last year, it began running commercials on national television featuring popular local comedian Tetsuro Degawa. Bloomberg