The Indian life insurance industry has begun to recover and is likely to report 12-15% growth in financial year (FY) 2016-17, according to an ICRA paper analysing the performance of nine life insurance companies in India, one in the public sector and eight in the private sector. Together, they represent over 87% of the total annualised premium equivalent (APE) of the life insurance industry during first nine months (April-December) of FY16.

During the last few quarters, LIC reported poor APE performance following the contraction in its regular premium collections and the weakness in its unit-linked insurance plan (Ulip) portfolio against the backdrop of an upbeat domestic stock market. In FY15, the regular segment contracted by 27% y-o-y and reported volumes of 23,000 crore. However, in first nine months of FY16, contraction in the regular premium segment reduced to 4% y-o-y. 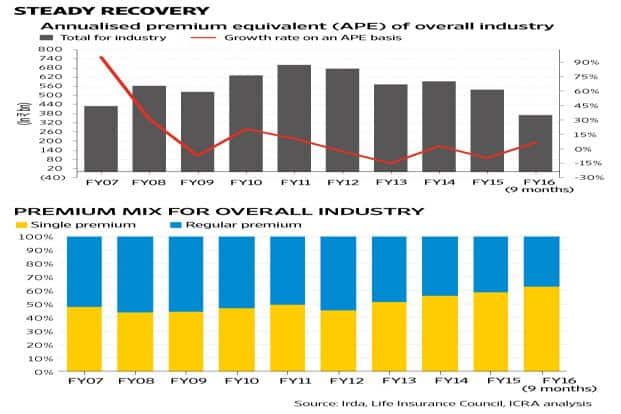 LIC’s regular premium segment contracted 4% y-o-y during the reported period, while that for the private companies analysed grew by 12% y-o-y during this period. Industry APE drew adequate support from declining LIC contraction rates and marginal improvement in the regular premium growth rate for private companies (29% y-o-y in first nine months of FY16, as against 25% in FY15).

In line with the trend witnessed during the past few years, especially since the regulatory changes of September 2011, the proportion of single premium in the total new business premia generated by the industry continued to rise in the first nine months of FY16. It rose to 63% during the stated period from 58% both in FY15 and April-December FY15.

But contrary to the trend of maintaining the single-premium proportion stable at around 30% during the past few years, private companies reported an increase in the proportion to 34% in the said period of FY16, as against 31% in the year-ago period. The increase followed the sharper focus that they brought to the single-premium segment. LIC, on the other hand, continues with its historical trend of growing its new business mix in favour of single-premium products. As of December 2015, single premium accounted for 75% of LIC’s total new business, versus 70% in December 2014.

Private insurers, who till last year had not paid much attention to the single-premium segment, have turned more aggressive.

Single-premium collections for them grew at a faster pace (29% y-o-y), compared with LIC (24% y-o-y), enabling industry collections in the segment to rise 25% y-o-y in this period.

The regular-premium segment has remained on a marginally lower growth trajectory. For private insurers, this segment grew 12% y-o-y during the period, while for LIC it contracted 4% y-o-y (contraction of 27% in FY15). Consequently, for the overall industry, the growth rate in the regular premium remained at the sub-5% levels in 9M FY16 (as against a contraction of 10% y-o-y in FY15).

As of the first half (April-September) of FY16, domestic life insurance companies remained well capitalised, partly because of the low growth in gross premium collections. The capitalization levels are comfortable, despite deteriorating profitability matrices largely on account of the large cushion of capital available—over and above the minimum regulatory requirement.

After the passage of the Insurance Laws (Amendment) Bill, 2015, which sets a higher cap on foreign investment in insurance joint ventures (JVs), nearly all foreign JV partners have shown interest in increasing the equity stake in their respective JVs.

The announcements made so far suggest 10,000-crore deals have been executed or are in their final stages of execution in the life insurance industry. But a significant part of the capital may go to the Indian JV partners concerned as they look to monetise their investments. In most of these deals, the post-money valuation of the JV stands between 1.0 times and 4.0 times their FY15 Gross Premium Written. If one were to use another multiple, such as Price/Net Worth, the range would stand substantially wider between 6.0 and 7.0 times.