Bangalore: With at least 450 million phones in India, conventional wisdom among venture capitalists and entrepreneurs says software applications related to maps, to news alerts, to music on cellphones make for good business.

For instance, wouldn’t software that converts a dictated message into a text message obviate the need to key in messages and help the illiterate use the service? Perhaps, yes. But entrepreneurs behind such nifty applications are discovering that tapping into India’s booming mobile phone market, the world’s second biggest after China by subscribers and the fastest growing, is easier said than done. 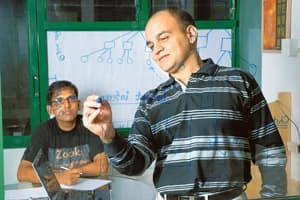 Scaling high: Ziva Software’s CEO Ajay Sethi says a friend of his at Erasmic Ventures introduced his firm to Just Dial. The link worked well for Ziva, which later signed on Just Dial as a customer. Hemant Mishra / Mint

“People are sceptical. The first reaction is amazement and then disbelief. SMS or ringtones are well known and accepted. Anything besides that makes people very hesitant and they do not take it up easily," says Tarun Anand, chief executive officer and chief technology officer at MIL mScriber Pvt. Ltd. The firm is launching its voice recognition applications this month, which convert voice into text.

Anand says that for a company entering the market, it is crucial to have friendly, sophisticated customers who can take a leap of faith with a start-up. “Once you get the early adapters, then you have references that you can show to future customers," he says.

The whole process of meeting the right executive, making a pitch and convincing them about its feasibility and the overall business plan also eats up a lot of time and energy, says an entrepreneur who has been through the grind.

“We are in an advanced stage of talks with a famous brand to offer our service through them. It takes a lot of time in getting approval from these people. It’s a very tedious and time-consuming process," says Raxit Sheth, co-founder and chief executive, Mobile 4 Mumbai, which provides bus route details on mobile phones. What will likely help Sheth in ratcheting up users for his service is that the application is available for a one-time fee of just Rs5.

Affordability, many mobile phone service start-ups are discovering, is key even if their offerings make for a major breakthrough.

“The paying capacity of users is always a concern," says Dasharatham Bitla, chief executive, Bitla Software Pvt. Ltd, which has an email to SMS messaging solution called Mobee. “Affordability is crucial for us, we can’t not have a customer because our offering is expensive."

Mobee enables mobile phone customers to access emails on their handsets without installing anything for a monthly fee ranging from Rs30 to Rs79. The firm worked out its costs and added a nominal margin on it, and decided to offer this service at prices which, it believes, will not be a hurdle for a user to sign up.

Meanwhile, entrepreneurs say the age-old practice of having a strong reference or relationship can take a new business a long way. Ajay Sethi, chief executive, Ziva Software Pvt. Ltd, which has developed an interactive mobile answer engine, says a friend of his at Erasmic Ventures introduced his yet-to-be-on-its-feet firm to directory services firm Just Dial Pvt. Ltd. The link worked well for Ziva, which later signed on Just Dial as a customer. Another customer, Infomedia 18 Ltd, came to Ziva through Nokia Oyj’s India operations. “One existing or a previous relationship can take you a long way. Without reference, it is much tougher," he says.

Still, early-stage technology investors think the difference between a successful mobile value-added services provider and one that is not is the ability to scale. “Companies with offerings for a niche market find it difficult to scale. Products with a mass market appeal are more likely to be a success," says Harish Gandhi, executive director, Canaan Partners.