OTHERS : Mumbai: Indian shares snapped a four-day winning streak pulled down by oil and banking and financial services companies as investors were cautious as December-quarter earnings season. Besides, muted sentiment in global markets and a surge in oil prices overnight also hurt the local stock market. After a choppy morning session, the BSE Sensex closed 106.41 points, or 0.29%, up at 36,106.50, and the Nifty 50 ended 33.55 points, or 0.31%, higher at 10,821.60.The BSE midcap and smallcap indices bucked the trend and rose 0.5% and 0.2%, respectively. Among the sectoral indices on BSE, consumer durables, healthcare, utilities and capital goods rose most, while oil and gas, bankex, energy and finance led losses.Tata Motors, NTPC,Titan, Bajaj Auto, Eicher Motors, M&M and Infosys were among the major gainers on the key indices, whereas IndusInd Bank, Kotak Bank, ONGC, Maruti Suzuki, Axis Bank and HPCL were among the top losers.In global markets, stocks in European stocks declined along with US futures after losses in Asian shares, where Japanese markets dropped most. US oil and Brent crude oil prices fell by 1% on rising US supply. Both benchmarks rose by around 5 percent the previous day. Here are the latest updates from the markets:

Infosys Q3 results tomorrow: 5 thing to watch out for

Oil drops by 1 percent on US supply surge

Oil prices fell by more than 1 percent on Thursday on swelling U.S. supply and amid caution after talks between the United States and China finished without any concrete details on a resolution to their trade disputes. US WTI crude oil futures were at $51.66 per barrel, down 70 cents, or 1.3%, from their last settlement. International Brent crude futures were down 1.2%, or 72 cents, at $60.72 per barrel. Both oil benchmarks rose by around 5 percent on the previous day.

Bandhan Bank posted a 10.4% rise in third-quarter profit on Thursday, boosted by a surge in interest income. Net profit was Rs 331 crore for the three months ended Dec. 31, compared to Rs 300 crore a year earlier, said the Kolkata-based bank which listed last year. But its asset quality worsened, with gross bad loans as a percentage of total loans standing at 2.41 percent at the end of December, compared with 1.29 percent in the previous quarter and 1.67 percent a year earlier. Bandhan Bank shares rose as much as 2.8% to Rs 467.15 per share.

After a bumpy second quarter, IndusInd Bank Ltd seems to be firmly back on its historic steady growth path. The lender has managed to reduce exposure to troubled sectors such as infrastructure and real estate writes @aparnaviyer02https://t.co/gY7yETsxYg 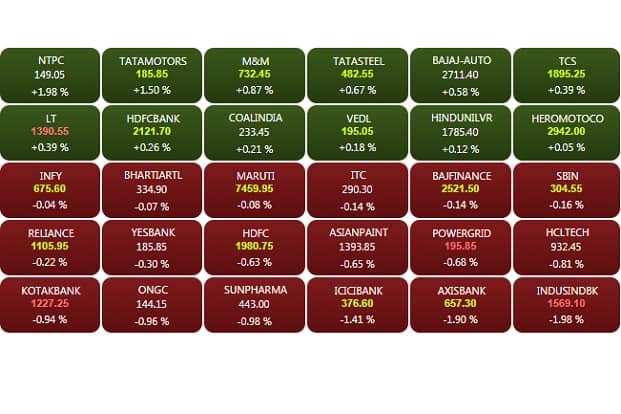 Shares of oil marketing companies traded lower as oil prices jumped over 5% in the previous session. However, Brent crude prices fell around 1% today. HPCL shares fell over 3%, while BPCL and Indian Oil were down around 1.5%

Maruti Suzuki India announced a price change for select models owing to increase in commodity prices and foreign exchange rates, among others. The price change varies across models and ranges upto Rs 10,000 (Ex-Showroom - Delhi), the company said today in a regulatory filing. The new prices are effective from 10th January 2019. Shares traded 0.05% up at Rs 7,469.30 per share. The stock hit a high and a low of 7502.05 and 7448.40, respectively.

Bandhan Bank shares up over 2% ahead of results

Bandhan Bank shares rose as much as 2.06% to Rs 463.75 per share ahead of December-quarter earnings due later today. According to Bloomberg analyst estiamtes, the lender is expected to post a profit of Rs 527 crore.

Vakrangee shares rose 5% to Rs 38 after the company Vakrangee said Ministry of Corporate Affairs found no irregularities after inspecting the company’s books of accounts for a period of three financial years. However, the parliamentary findings have made few observations related to unspent CSR funds, franchisee funding and certain financial disclosures.

The Indian rupee strengthened marginally against the US dollar, tracking gains in Asian peers after minutes from the US Federal Reserve confirmed patience on rate hikes. At 9.10am, the currency was trading at 70.36 a dollar, up 0.15% from previous close of 70.47. The home currency opened at 70.53 a dollar and touched a high and a low of 70.35 and 70.54, respectively. Yield on the 2028 bond was trading at 7.46% from its Wednesday’s close of 7.47%.

Oil prices fell by 1% on swelling U.S. supply, although the mood in global markets was increasingly confident amid hopes the United States and China may soon end trade disputes that have undermined global economic growth. US WTI crude oil futures were at $51.75 per barrel, down 61 cents, or 1.2%, from their last settlement. International Brent crude futures were down 1%, or 63 cents, at $60.81 per barrel. Both oil price benchmarks had jumped by around 5% the previous day.Gold prices held near seven-month highs as the dollar was pressured by rising expectations the US Federal Reserve will keep interest rates steady this year, while investors also waited for further news on Sino-US trade talks. Spot gold was a tad lower at $1,292.46 per ounce, hovering near Friday’s peak of $1,298.42 - a level last seen in June. US gold futures rose 0.1 percent to $1,293.20 per ounce. Palladium dipped 0.8% to $1,316.00.Metals: London copper was little changed in early Asian trade as the red metal sought to cling on to gains made from optimism over the latest round of US-China trade talks in Beijing. Three-month LME copper was flat at $5,956 a tonne after ending 0.9 percent higher on Wednesday. The most-traded March copper contract in Shanghai edged down 0.1 percent to $6,974.01 a tonne. The base complex was mixed, with London nickel down 0.1% and zinc losing 0.4%. LME aluminium climbed 0.1% and tin, which rose above $20,000 for the first time in over six months on Wednesday, added another 0.2% to $20,100 a tonne, its highest since June 26, on concerns of tight supply. (Reuters)

The post-Christmas rally in global equities stalled on Thursday in Asia as investors took a step back in the absence of any concrete details on trade negotiations. The yen and Treasuries gained. The steepest declines were in Japan. S&P 500 Index futures retreated as while the U.S. and China laid the ground for resolving trade issues, negotiations seem likely to continue indefinitely. Shares fell in South Korea and Hong Kong, and fluctuated in Shanghai. The offshore yuan stayed at the strongest since August. The dollar was steady and crude pulled back after climbing above $52 a barrel and entering a bull market.Japan’s Topix index fell 1.2 percent as of 11:55 a.m. in Tokyo. The MSCI Asia Pacific Index slid 0.5 percent following five days of gains. S&P 500 futures declined 0.5 percent lower. The S&P 500 rose 0.4 percent. (Bloomberg)

Share Via
Close
No Network
Server Issue
Internet Not Available