Since January, Maruti Suzuki India Ltd’s stock has fallen by 19%, much sharper than the 3% fall in the BSE Sensex and the 3.8% drop in the BSE auto index. What made this outperformer and darling of the bourses fall from grace? That, too, at a time when the firm’s car sales are growing at a faster pace than its peers and it is steadily chipping away at their market share?

One key concern on the Street is that the firm’s profitability may have hit a temporary roadblock. The 8% appreciation in Japanese yen in the last three months is bound to hit Maruti’s margins, given that about one-fifth of its cost (including royalty) is yen-denominated. As currency impact comes with a lag, analysts have watered down the operating margin for fiscal 2017 although just a tad bit.

Another reason is the hunch that Maruti may feel a capacity crunch in the near term in spite of debottlenecking efforts. Mihir Jhaveri, an analyst at Religare Capital Markets Ltd, says that as the firm’s new capacity at Gujarat will add up numbers only in fiscal 2018, “production constraints would limit the CAGR (compounded annual growth rate) in fiscal 2016-18 to a mere 11%, in spite of new launches." Perhaps, analysts believe that it could be an opportunity lost for Maruti, especially since the firm bites off nearly half the market pie in cars. 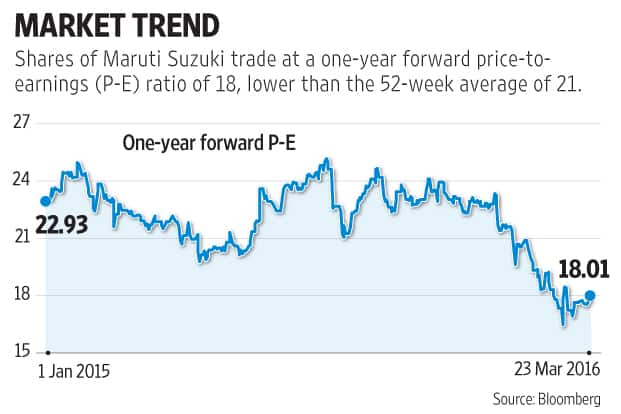 Most analysts have trimmed earnings estimates for fiscals 2017 and 2018 by around 10% to accommodate lower margin and a capacity constraint that will stymie growth at least in the near term.

Investors have obviously factored this in already. At ₹ 3,735 apiece, shares of Maruti trade at a one-year forward price-to-earnings ratio of 18 (25 March 2016), which is down from about 24 six months ago and also lower than the 52-week average of 21. The stock has, therefore, priced in the moderation in forecast.

That said, Maruti continues to rule the roost in the passenger car segment. Undoubtedly, in the long run, higher capacity will kick in the benefits of operating leverage to get profitability back on track. Meanwhile, as demand improves, discounts could reduce, too. The firm will also gain most, compared with the others in the flock, from the sharp 16% drop in petrol prices (since January 2014). Note that petrol cars comprise almost 75% of the cars sold by Maruti.

This suggests that the decline in the stock price has factored in the near-term challenges.