In the last decade, there has been a continuous and massive trade gap between India and China, except during bouts of sharp rupee depreciation, when the trade gap shrank

India’s trade balance against China continues to deteriorate. Imports from China have jumped by one-fifth to $60 billion in FY15, compared with a year ago, while exports have plunged to $12 billion, leading to a huge trade gap (see chart 1), according to a note by Kotak Institutional Research on 10 June.

In the last decade, there has been a continuous and massive trade gap between India and China, except during bouts of sharp rupee depreciation, when the trade gap shrank. “Land, labour and capital are cheaper in China, compared with India, though, of course, labour in China is getting expensive now. Indian workers lack the much-needed skills, while land and capital continue to remain expensive," said Tirthankar Patnaik, strategist at Mizuho Bank.

India needs to streamline fuel supply and policy issues such as easing of strict labour laws to compete with China. Also, the government needs to pass key bills on goods and services tax and the amendments to the land acquisition law. 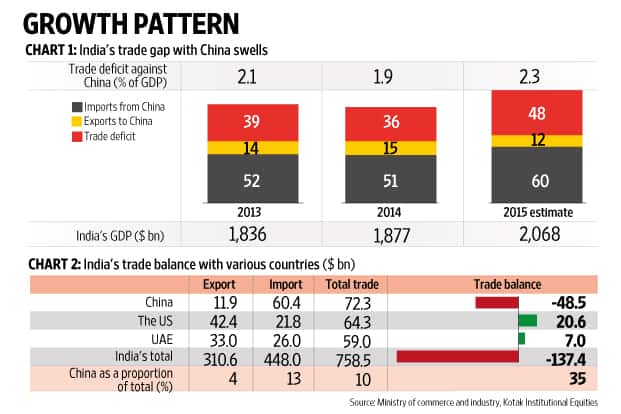 Around 13% of the Indian imports are from China, while only 4% of exports head to China (see chart 2). A closer look at the imports shows that electrical machinery and equipment parts make up around one-third of the overall imports. This is followed by nuclear reactors, boilers, machinery and mechanical appliances, which make up for around one-fourth of the imports. India also imports organic chemicals, fertilizers, iron and steel and projects goods in large amounts. The list of exports to China include cotton, copper, mineral fuels, organic chemicals—making up around half of the total exports, according to Kotak Institutional Research.

India can gain access to the Chinese market, where it has a competitive advantage, and try to meet the requirements of Chinese consumers as they re-orient their economy towards consumption; but it is unlikely to happen soon. That means the trade imbalance is very likely to continue in the near future.