Thanks for Visiting Mint
You seem to have an Ad Blocker on. Please turn it off in order to continue, or whitelist Mint
HOW TO TURN OFF AD BLOCKER
OR
REFRESH IF YOU ALREADY TURNED OFF THE AD BLOCKER
Home >Market >Mark-to-market >Sugar: can ending stock limits alone support prices?

Will the government’s decision to withdraw stock limits for sugar be enough to support prices? Stock limits on sugar were anyway due to end on 31 December unless the government extended the date. 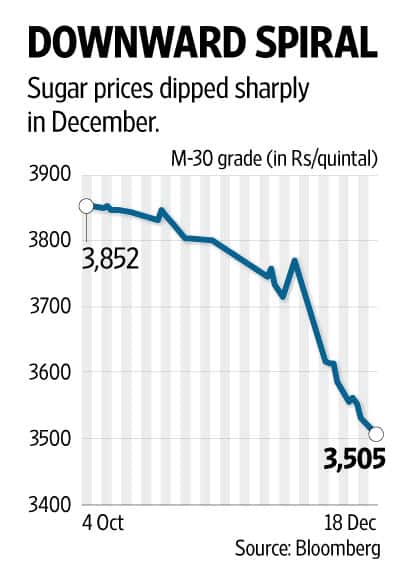 That it decided not to wait for a mere 10 days indicates the government was keen to support prices, especially after news reports said sugar mills may delay payments to cane farmers due to falling prices. Wholesale prices of M30 grade sugar have fallen by 6% over a month ago.

The withdrawal of stock limits gives dealers the freedom to buy and stock sugar, matching supply to demand and hold out for better prices.

The hope is that this move will lend more stability to the market and therefore to sugar prices.

These limits were needed when sugar output was lower in the previous season, due to unfavourable weather, and are useful to keep prices in check.

But the current sugar season, which runs from October to September, is expected to be better.

The Indian Sugar Mills Association estimates output to be 25.1 million tonnes compared to 20.3 million tonnes a year ago. While the increase is significant, it is due to a relatively low base. As of 15 December, sugar output is up by 29.8%.

ISMA also attributed the dip in prices to rumours of the next season (2018-19) being a bumper one, which it said was untrue as only 10-15% of cane area has been actually planted.

Still, the broad expectation is that next year’s crop will be a good one. ISMA also reported that bids for ethanol supplied by sugar mills have been healthy this season, which result in higher income from sale of ethanol. More cane crushed should yield higher income from by-products too.

In the near term, stock limits may support prices to an extent but the focus will shift back to how the final output numbers will look and then the sowing pattern for the next season.

Any further supportive policy measure could help mills too. In a note after the limits were lifted, Care Ratings said it expects prices in 2017-18 to be stable on the back of higher consumption, offsetting the increase in output.

International prices are another factor and here, sugar prices have been declining in December. The US Foreign Agricultural Service has estimated global sugar output to increase by 4.6% in 2017-18, while consumption is expected to increase by 1.5%.

While this is seen as negative for the price outlook, stocks remain in the historical range as output in previous years was relatively lower. Financial positions can influence movements, depending on the view funds take.

The lifting of stock limits is a boost to sentiment but it will be back to watching international markets and domestic output trends.

That may also explain why sugar stocks went up on Tuesday as news of the stock limits being removed reached markets, but Wednesday saw some of them decline.