Manappuram Finance continued to decline on Wednesday, dropping 14.26% on the BSE

Mumbai: Shares of gold-loan company Manappuram Finance Ltd continued to decline on Wednesday, dropping 14.26% on the BSE, adding to Tuesday’s losses following a cut in earnings estimates by brokerage firms.

“We expect an under-recovery of revenue on certain gold loan portfolios due to correction in the gold price. This may result in reduction in profit numbers for the fourth quarter ending 31 March 2013," the Kerala-based company said in a release on the BSE on Tuesday.

The stock lost a cumulative 31.36% over Tuesday and Wednesday. Trading in the stock was halted on Tuesday as it hit the circuit limit after tumbling 20% following a warning by the company of a reduction in profit on an analysts’ call. Manappuram Finance lost 14.26% to close at ₹ 23.75 per share on Wednesday on BSE, while the benchmark index, Sensex lost 0.65% to close at 18,884.19 points.

In a note on Tuesday, UBS cut its earning per share (EPS) estimates for Manappuram Finance by 32% and 27% in fiscal years 2013 and 2014, respectively, on income reversals and lower growth of assets under management.

UBS analysts Vishal Goyal and Stephen Andrews cut the 12-month target price on the stock from ₹ 55 to ₹ 45, but retained the “buy" rating, citing cheap valuations. Religare Capital Markets also reduced its earnings estimates and target price but maintained its “hold" rating on the stock.

Ambit Capital said it has kept its rating on the stock under “review". The brokerage had recommended a buy on the stock prior to the profit warning from the company.

The company denied media reports that it had unfairly disclosed information selectively.

“The statement that the company has selectively shared information with some investors is false and baseless," it said.

The company said that out of the total gold loan book, the company has a loan portfolio of close to ₹ 1,500 crore and about ₹ 500 crore as interest accrued.

“These loans of ₹ 1,500 crore were disbursed largely during the months of October to December 2012 at a relatively higher LTV (loan to value) and therefore, the company may lose a portion of the accrued interest to the extent of ₹ 250 crore as the price of the underlying security may not be sufficient to recover the interest in full due to the recent price correction of gold," Manappuram said. 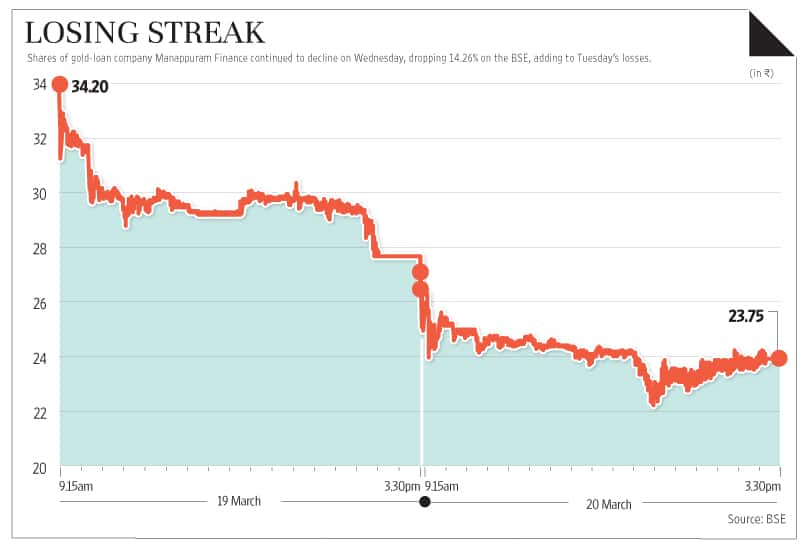 “We expect a one-time hit of ₹ 250 crore during this quarter either by way of crystalized income not being received or expected to be not received resulting in a Q4 loss up to ₹ 50 crore...As a result of it, the profit after tax of the company for the year 2012-13 is expected to be in the range of ₹ 300 crore," Manappuram added.

An analyst at a Mumbai-based brokerage firm said, on condition of anonymity, “The company lends 90-95% on gold and gold jewellery, short-term loans that are repayable in a single instalment with interest. This has landed the company in a unique position for customer defaults. The customer can forego redeeming pledged gold, renege on interest payments and if he so desires can buy gold from open market as it is now available for less than loan plus interest value."

Oommen Mammen, chief financial officer at Muthoot Finance, said, “The company’s stock was down as a result of sentimental reaction on the sector."