Are markets getting hopeful RBI will cut interest rates?

Mumbai: Bond markets, which had almost given up on the possibility of any significant cuts in interest rates over the next few months, appear to be changing their minds.

The fine print of the pay commission awards and the possibility of a more dovish Central bank governor have driven down bond yields in India to levels last seen in April. A drop in global bond yields, which fell as investors sought the safety of government securities following the Brexit vote, has also contributed to the drop in borrowing costs for the Indian government.

The benchmark 10-year bond yield fell to 7.41% on Friday, a level last seen 19 April. Bond yields have fallen in 11 out of the last 14 trading sessions.

What’s changed? Or rather, what’s likely to change to allow for benchmark rates to drop? For one, the Central bank governor.

The drop in bond yields has coincided with Reserve Bank of India (RBI) governor Raghuram Rajan’s decision to leave after his three-year tenure ends in September. The decision, announced on 18 June, has led to speculation that the incoming governor may be more dovish since Rajan’s insistence to stay the course in fighting inflation was seen as a point of friction between him and the government. 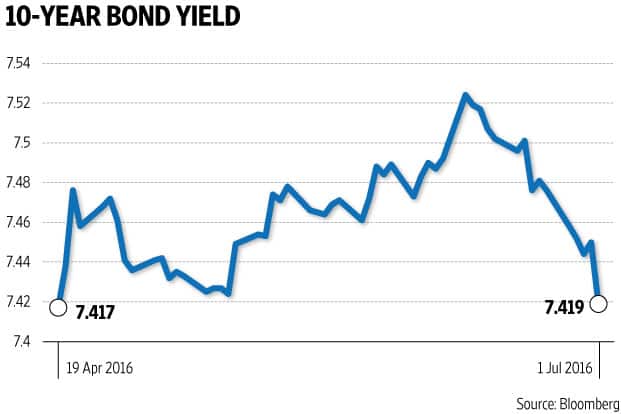 At the last policy meet on 7 June, the Rajan-led RBI kept interest rates unchanged and cited the resurgence of inflation pressures. Rajan intends to bring down inflation to 5% by March 2017 and to 4% (within a band of +/-2%) over the medium term. In a speech on 21 June, soon after he resigned, Rajan argued that the fight against inflation must continue.

Some reports have, however, suggested that there could be relook at the medium term inflation target of 4%. On Monday, the Business Standard reported that the government may revise that medium-term target in consultation with the RBI.

To be sure, the possibility of a more dovish RBI governor is not the only reason that interest rates in the bond market have fallen. The fine print of the pay commission awards has also led to some easing of inflation pressures.

“Housing allowance directly enters the CPI (consumer price inflation) calculation. Given that the increase in housing allowance has been pushed out for at least 1H of the current year, we are lowering our average CPI inflation forecast for FY16-17 to 5.2% from 5.5% earlier," wrote Deepali Bhargava, economist at Credit Suisse in a note on 1 July.

“This, together with the possibility of a more dovish new RBI governor and delayed Fed hikes could create room for further monetary policy easing in the second half of the current financial year," she added.

The RBI has already eased rates considerably since the start of the cycle which began in 2015. Since then, the benchmark repo rate has been slashed by 150 basis points from 8% to 6.5% now.