Asia-Pacific's population of high networth individuals grew 17.3% last year against 13.5% in the rest of the world, says wealth report

Singapore: The Asia-Pacific’s population of high networth individuals (HNWIs) expanded 17.3% last year, compared with 13.5% in the rest of the world, according to the ‘World Wealth Report’ released by Capgemini and RBC Wealth Management on 21 October. 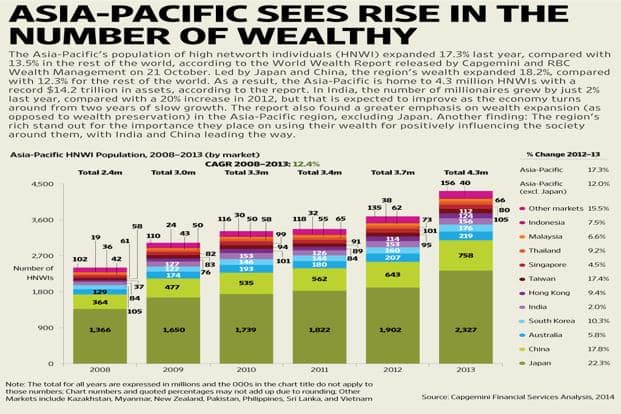 Led by Japan and China, the region’s wealth expanded 18.2%, compared with 12.3% for the rest of the world. As a result, the Asia-Pacific is home to 4.3 million HNWIs with a record $14.2 trillion in assets, according to the report.

In India, the number of millionaires grew by just 2% last year, compared with a 20% increase in 2012, but that is expected to improve as the economy turns around from two years of slow growth.

The report also found a greater emphasis on wealth expansion (as opposed to wealth preservation) in the Asia-Pacific region, excluding Japan.

The region’s rich stand out for the importance they place on using their wealth for positively influencing the society around them, with India and China leading the way.

— In terms of the number of millionaires, India experienced the lowest growth rate in 2013 when compared with the other countries in this region.

— The confidence to generate wealth fell most in Singapore in 2013, followed by India.

— Indians preferred to invest in Middle East and Africa.

— For 40% of India’s HNWIs, the focus was not on wealth growth, but wealth preservation, second only to France.

— India was second only to Australia when it comes to its HNWIs having a bulk of their assets in real estate.

— India stood out for its allocation to fixed income globally due to high interest rates that drove allocations away from cash.