New York: The Standard & Poor’s 500 just barely extended a streak of gains to a fourth day on Wednesday, ending above 1,400 in another thinly traded session. 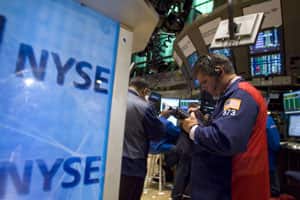 The three major US stock indexes opened lower but recovered at midday, led by consumer staples and health care. Both are defensive plays, an indication that investors are keeping their enthusiasm in check.

“It’s very positive that we found better footing throughout the session, which indicates that the market’s path of least resistance is higher," said Jeff Mortimer, director of investment strategy for BNY Mellon Wealth Management in Boston.

The hope for central bank action comes amid projections of poor growth for coming quarters and lackluster demand worldwide.

In a sign of that weakening demand, McDonald’s Corp fell 1.7% to $87.53 after reporting flat same-store sales in July, the worst performance for the Dow component in more than nine years.

“The idea that Europe will remove itself from the brink is clearly contributing to the tone in markets. There’s a feeling that central banks will do whatever it takes to provide liquidity, should things get worse," said Mortimer, who helps oversee $171 billion in assets.

The Bank of England gave little indication that it would rush to pour in further stimulus even as it sharply cut its forecast for medium-term economic growth in Britain. France’s central bank forecast a contraction in growth going into the third quarter, citing weak demand from the periphery and Britain.

Spanish benchmark 10-year debt yields briefly rose above 7%, underscoring the cautious tone from investors recently disappointed by lack of coordination from European officials in their efforts to reignite the economy.

Markets are pricing in the idea that it may take time until Spain asks for a bailout, which would open the door for ECB intervention.

Wednesday’s market moves appeared to be largely driven by algorithmic trading, signaling a lack of conviction in any one direction.

Volume was light, with about 5.72 billion shares traded on the New York Stock Exchange, the American Stock Exchange and Nasdaq, well below last year’s daily average of 7.84 billion.

The consumer discretionary sector was the day’s weakest, falling 0.4% as fashion juggernaut Ralph Lauren and travel websites Priceline and Orbitz both forecast slowing demand due to the global slowdown.

Shares of Dean Foods, which is spinning off a unit, jumped 40.6% to $17.46 a day after posting a stronger-than-expected quarterly profit.

The stock of MEMC Electronic Materials Inc shot up nearly 11% to $2.28 after the silicon wafer maker reported a surprising quarterly profit on an adjusted basis.

Just under half of the stocks traded on the New York Stock Exchange closed higher on Wednesday, while on the Nasdaq, about 42% of shares closed higher. Reuters