The stock markets had it coming

A 723-point fall in the Sensex to its lowest point this year may seem like a sharp and sudden fall, but Indian equities had it coming for quite some time now

A 723-point, or 2.63%, fall in the Sensex to its lowest point this year may seem like a sharp and sudden fall, but Indian equities had it coming for quite some time now. The difficulties being faced by the new government and the lack of traction in company earnings are increasingly showing up in the market’s dips. Local equities are the worst performing major market this year, as is evident from chart 1. The Modi magic is fading from the markets.

A major concern is that despite the new GDP (gross domestic product) numbers promising a wonderful year, demand continues to remain soft indicating that expectations from the change of guard at the centre are waning.

The HSBC India Composite Purchasing Managers’ Index shows that private sector activity fell to a six-month low of 52.5 in April as both manufacturing and services sector recovery is yet to find a firm footing. What’s worse, companies are shedding jobs. In the past six months, the Sensex has fallen 6% following the trend in the Composite PMI, as the chart 2 shows. 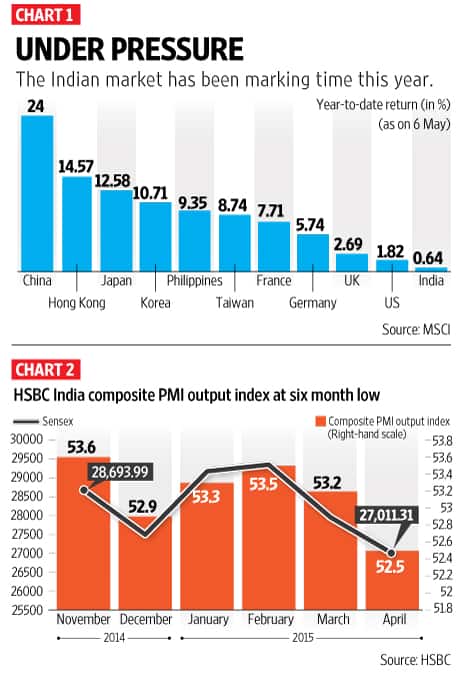 Markets rise or fall based on new information and they are increasingly discounting the prospects of a stimulus in China and a less moribund future for Europe. In contrast, after the initial euphoria in India, markets have come to face a more sober reality. While there is no danger of an immediate oil shock, crude oil prices have also gained over 40% since their lows of last year.

Foreign institutional investors, who were gung-ho on India not too long ago, have become bearish owing to lack of recovery in economic fundamentals. A tax row with the government over the retrospective levy of minimum alternate tax has only increased their dislike for Indian stocks. They have sold around ₹ 12,661 crore since mid-April, according to data from the Securities and Exchange Board of India. This number doesn’t include Daiichi Sankyo’s sale of its Sun Pharma stake.

“When the market falls like a knife, no one wants to catch it," said Ambareesh Baliga, an independent market analyst. A continued fall may have spurred those investors who funded their share purchases with margin money to sell, making it a vicious cycle.

Secondly, as Prime Database numbers show, cash-strapped promoters of Indian firms continue to pledge more shares. At the end of the last fiscal year, promoter pledging for 495 NSE-listed companies rose to ₹ 1.94 trillion, or 43% of their holdings. In a falling market, people who hold these shares as collateral may sell to maintain margins, which leads to a further fall in prices.

With the Met department predicting a below-normal monsoon and no signs of revival of private sector capital expenditure, there is no trigger for the markets to rise. There is nothing in the legislative agenda that increases optimism either. The land acquisition and real estate bill are still stuck. Although, the goods and services tax bill cleared the Lok Sabha, its real test will be in the upper house where the government is a minority.

“There is no likelihood of capex by the private sector over the next one year. The selling will continue until such negative sentiment prevails and there is going to be more pain between now and Diwali," said Saurabh Mukherjea, head of institutional equities at Ambit Capital Pvt Ltd.​